By Aigerim Seisembayeva in Nation on 30 May 2017

ASTANA – Kazakh President Nursultan Nazarbayev awarded diplomas May 27 to the graduates of Nazarbayev University (NU). The commencement was followed by a meeting of the NU Supreme Board of Trustees, Nazarbayev Intellectual Schools and Nazarbayev Foundation to discuss the autonomous educational organisations’ development prospects. 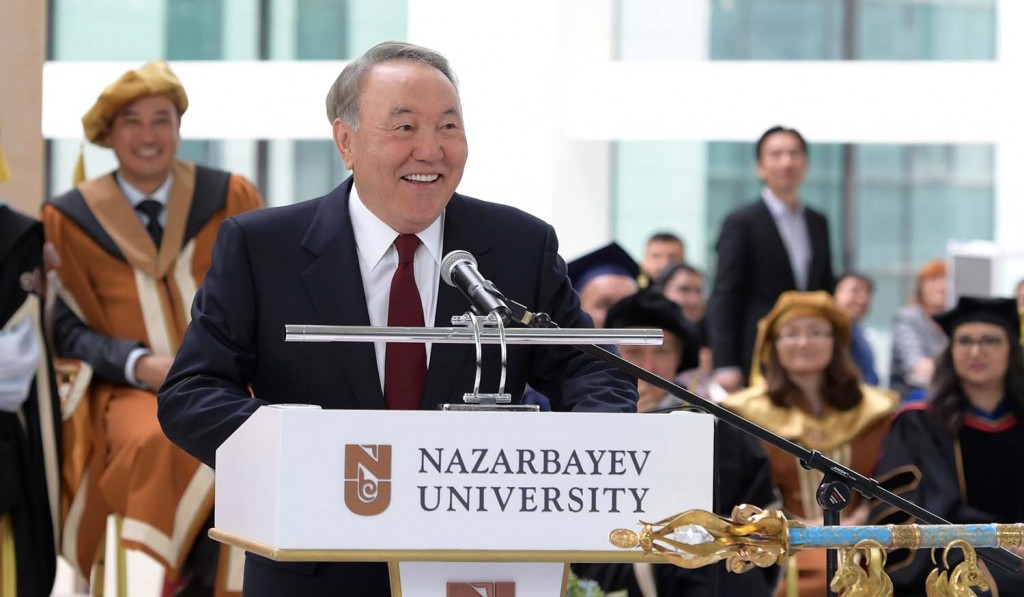 Despite the pouring rain, the first part of the ceremony was held in the open air and attended by students’ parents, representatives of the Board of Trustees and the NU faculty.

Addressing the audience, the President congratulated the graduates on a significant day in their lives and stressed that the day’s success was made possible thanks to the synergy and joint efforts of students, professors, members of the Board of Trustees and the university staff. 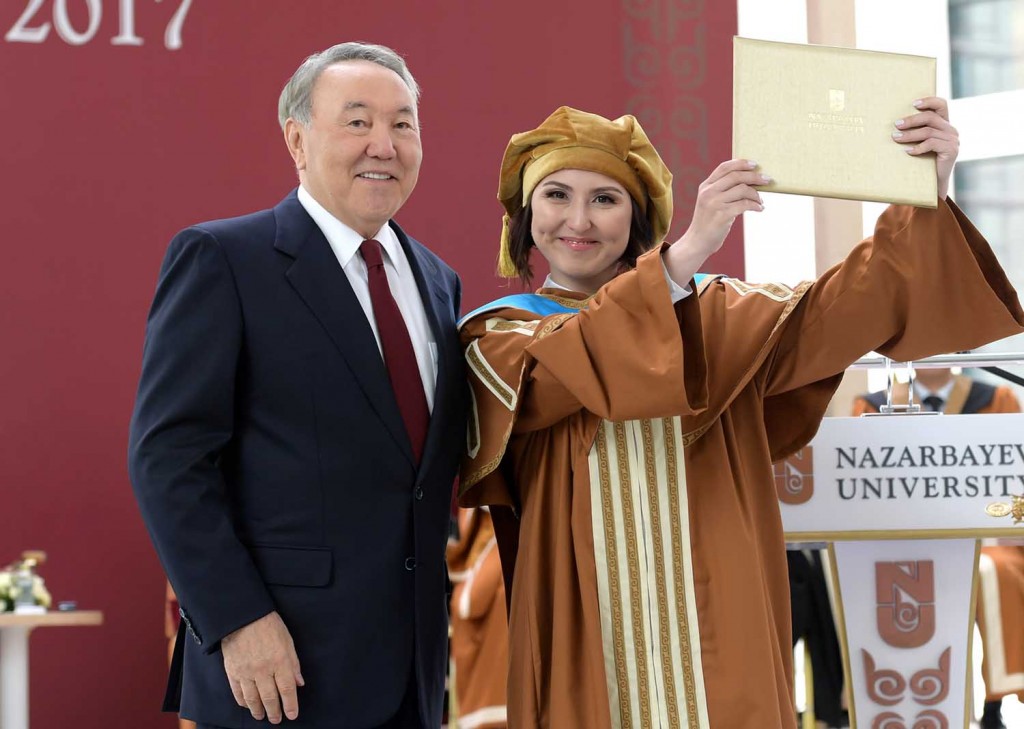 “This spring day is marked by a very joyful event – the start of a professional career for the graduates of Nazarbayev University. Today, 737 graduates completed their studies. For the first time in its history, nine doctors of philosophy have graduated,” he said.

“Over the past years, more than a thousand students have graduated from the university. Half of them continued their studies at the most prestigious universities in the world. Those graduates who entered the labour market have already proved their high competitiveness. They work in the largest companies of our country, in science, medicine and in public service,” he said. 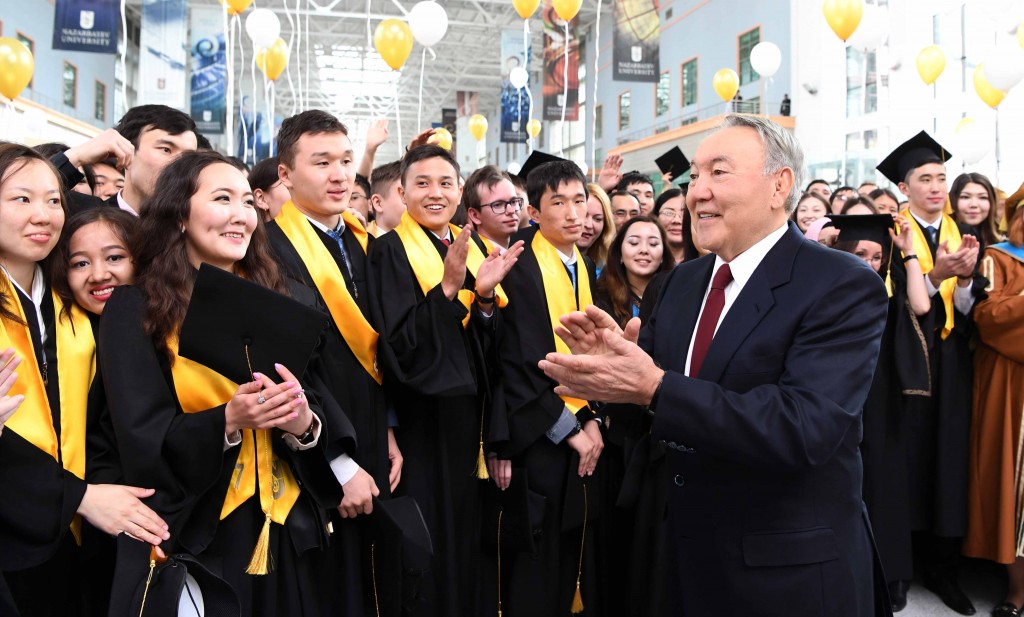 The President noted those achievements were made possible through an effective educational model based on meritocracy and the competitive selection system. He stressed the basic selection principles in educational institutions are objectivity and openness.

“The doors of the university and the intellectual schools are open for everyone, but only the most talented, hardworking and knowledge-seeking young people enter these institutions,” he said.

Nazarbayev drew attention to the need of increasing NU’s institutional capacity due to the future increase in the number of students.

“Today, the number of students has reached 4,000 and it will double in the future. Scholars from 55 countries of the world work here today; they do not only teach, but also conduct scientific research. English is the language of instruction and research. More than a thousand papers have already been published, with some of them in the most quoted world scholarly publications,” he said.

The head of state drew attention to the importance of allocating appropriate grants which will improve the quality of research and provide youth with the opportunity to expand their scientific contacts. He also spoke about the university’s active international relations and its integration into the global academic environment.

“Partnerships have been established with more than a hundred educational and scientific institutions. Nazarbayev University became a co-founder of the Alliance of Asian Universities, which includes the leading universities of China, Hong Kong, India, Indonesia, Japan, South Korea, Malaysia, Singapore and other countries. There is a need to further expand international relations, adopt the best practices of our partners and maintain our uniqueness,” he said.

He noted the relevance of applying NU’s experience throughout the country’s higher education system.

“Managers and instructors at national universities should be trained here and then implement the best practices at their institutions. The university is our strategic response to the challenges of a new global reality. It is time to allocate some of the Bolashak Programme’s funds to education at this university. Young scientists who offer their ideas and technologies to the market should receive systematic support in the form of consultations, start-up capital, premises, marketing and legal services,” said Nazarbayev.

Addressing the graduates, the President highlighted the key factors for achieving success which were outlined in his article “Course towards the future: modernisation of Kazakhstan’s identity.”

“In today’s world, the winner is not the one who clings to once-gained knowledge, but the one who can study throughout his life. The one who is always ready for change and who speaks the same language as researchers and investors. My life experience convinces me that a modern Kazakh in a new era needs to have specific qualities. First, being competitive. This is relevant not only for the economy as a whole, but also for every individual. Being pragmatic and being a patriot. Maintaining the cult of knowledge. The more a person knows, the wider his possibilities are. I am sure that university students understand this better than anyone,” he said.

Nazarbayev also noted the importance of preserving the evolutionary development of society, as well as the presence of an open attitude, knowledge of world languages and an adequate perception of what is happening in the global world for further personal growth.

“I am confident that you will make a worthy contribution to the development and prosperity of an independent Kazakhstan. Your success will contribute to the growth of our alma mater’s prestige. In order to do this, you must work hard and always move forward towards your goals,” he said.

The Board of Trustees meeting included a discussion of the development prospects for NU and intellectual schools, organisational aspects and the selection of new members of the boards of trustees.

“All the graduates of the intellectual schools enter universities, including abroad. More than 90 percent are holders of state and university educational grants. To impart a new impetus to our educational institutions, we need to update the strategies for their further work,” said Nazarbayev.

He noted that in seven years, the university has achieved significant successes and graduated about 2,000 students.