By Malika Orazgaliyeva in International on 5 May 2017

Kazakhstan, Japan and the Comprehensive Nuclear-Test-Ban Treaty Organisation (CTBTO) issued a joint appeal to launch the first of a series of preparatory discussions ahead of the 2020 review of the Treaty on Nonproliferation of Nuclear Weapons (NPT). 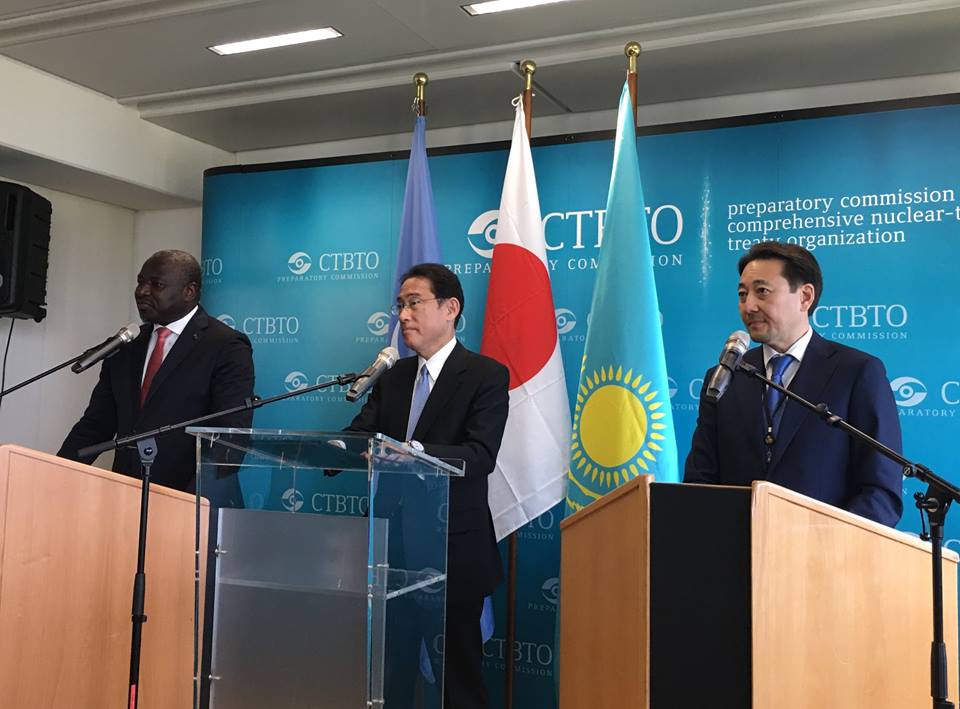 At a joint press conference on May 2, Kishida, Zerbo and Permanent Representative of Kazakhstan to the UN offices in Vienna Kairat Sarybay presented the document.

In his opening remarks, Zerbo thanked both Japan and Kazakhstan as coordinators of the Article XIV conference, as the Conference on Facilitating Entry into Force of the CTBT is often called, for their continuous and strong support for the CTBT and highlighted the importance of the issue in the current geopolitical situation, especially with regard to North Korea.

“This appeal demonstrates both countries’ tireless work as co-coordinators of Article XIV, as well as the fact that the treaty is being well promoted and that the verification system is strong and effective,” Zerbo said.

Kishida stated that CTBT is at the core of realistic and practical nuclear disarmament measures that Japan promotes. In his remarks, he emphasised three major points: the importance of the CTBT’s entry into force without delay, the rising threat posed by North Korea’s nuclear and missile development, and the importance of the universalisation of the International Monitoring System (IMS).

“This year Japan will host a regional CTBT conference for Southeast Asia, the Pacific and the East. Also we will aim to have cooperation between the CTBTO Youth Group and our Youth Communicators for a world without nuclear weapons,” Kishida mentioned.

In his remarks, Sarybay spoke of his country’s decision to shut down one of the world’s largest nuclear test sites in Semipalatinsk in 1991, paving the way for the adoption of the CTBT five years later in 1996. Sarybay mentioned that 20 years after its opening for signature, the treaty has not yet entered into force.

Sarybay stated that the joint appeal “reflects not only the wishes of both countries’ peoples, but also the wish of the global community,” adding that The ATOM Project petition initiative launched by Kazakhstan has so far gained more than 300,000 signatures from around the world in support of a nuclear weapons test ban.

“We encourage the states whose ratification is needed for the entry into force of the CTBT to sign and ratify the treaty as soon as possible. Its rapid entry into force would be essential for an effective implementation of the NPT,” he noted.