By Zhanna Shayakhmetova in Nation on 28 April 2017

ASTANA – State bodies and civil society institutions should strengthen efforts to modernise public awareness with an emphasis on zero tolerance for any activities related to radical manifestations, especially in the sphere of religious relations, said Kazakh State Secretary Gulshara Abdykalikova. She made the comments at the conference on the role of women’s organisations in preventing religious extremism among youth, held April 21 in Almaty. 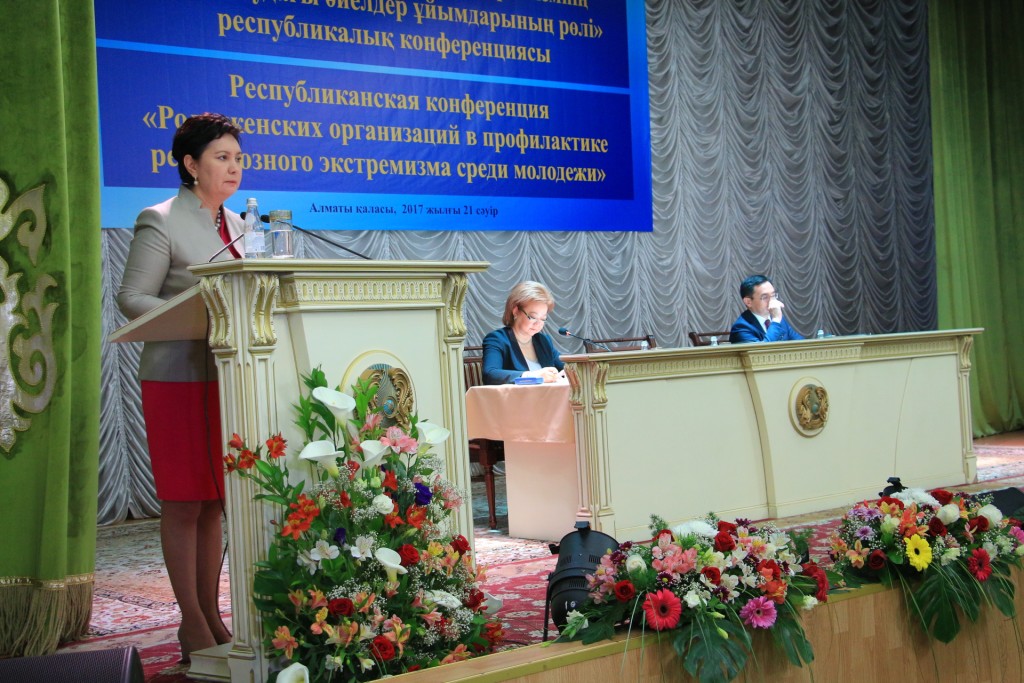 Abdykalikova, whose job responsibilities include chairing numerous important inter-departmental commissions, such as on citizenship, state awards, state symbols, and fighting corruption among others, noted President Nursultan Nazarbayev set the task of preventing religious extremism propaganda and called for the active involvement of the non-governmental sector and religious associations in implementing the goals of the presidential policy article “Course towards the future: modernisation of Kazakhstan’s identity.”

“Today, there are four million young people in Kazakhstan. According to the Ministry of Religious Affairs and Civil Society, 79.6 percent of young people hold religious beliefs and the share actively practising their religion is 9.9 percent. Youth is the most vulnerable group all over the world which can be easily influenced by destructive organisations. It is important for families to start working with their children from early childhood. The head of state adopted the concept of family and gender policy in Kazakhstan up to 2030, which defines long-term priorities for the development of human capital through the formation of an effective gender policy,” she said.

The internet significantly influences the radicalisation process. In Kazakhstan, more than 100,000 facts spreading terrorism and extremism ideas were found and neutralised in local segments in the first quarter of the year, the State Secretary noted. Last year, 315 cases of crimes containing signs of extremism and terrorism were registered and 12 extremist acts were prevented in the first six months due to the well-coordinated work of law enforcement bodies.

Preventive work has been systematically conducted among various sections of the population. Approximately 32 percent of followers of non-traditional religious trends are included in targeted prevention activities.

Ninety-one individuals were prevented from travelling abroad to fight with armed groups, and 123 people were convicted for terrorist and religious-extremist crimes as part of implementing the Counter Religious Extremism and Terrorism programme for 2013-2017.

All of these trends mean preventing religious extremism among the youth is of great importance.

“It is necessary to concentrate efforts on the following tasks. First, the state bodies along with civil society institutions should strengthen work on modernising the nation’s identity with an accent on zero tolerance towards any actions connected to radical manifestations, especially in the religious sphere. Secondly, opinion leaders should be involved in promoting national traditions, family values ​​and spiritual revival. Thirdly, women’s non-governmental organisations (NGOs) should conduct targeted and individual work to prevent adherence of women to non-traditional religious movements. Fourthly, there is a need to increase the number of female theologians who are able to take part in the work on preventing religious extremism. And fifthly, regional commissions under the akimats on women’s affairs and family and demographic policy should actively cooperate,” said Abdykalikova.

Since 2013, the National Commission for Women and Family and Demographic Policy has implemented the Women and Religion project in 10 regions in cooperation with their religious affairs bodies. The forums and conferences are held in the regions as part of the project.

Abdykalikova noted effective state policy in the field of combating religious extremism is the country’s main task in terms of growing challenges and global threats.