By Aigerim Seisembayeva in Central Asia, International on 11 April 2017

ASTANA – The Council of Foreign Ministers (CFM) of the Commonwealth of Independent States (CIS) agreed on a number of important documents and confirmed its commitment to interreligious equality during its regular meeting April 7 in Tashkent. The Kazakh foreign minister took part in the meeting and held bilateral talks with his colleagues from CIS member states.

The council adopted a statement on inadmissibility of discrimination and intolerance against Christians, Muslims and representatives of other faiths. The statement highlighted the role of the Congress of Leaders of World and Traditional Religions, which has become a platform for global interreligious dialogue on preventing and combatting intolerance and discrimination based on religion.

The foreign ministers also signed multiple documents agreed on a number of important documents, which will be submitted for consideration by CIS heads of state later in the year, and which develop the initiatives of the President of Kazakhstan Nursultan Nazarbayev, voiced at the CIS Summit in Burabai in October 2015, to adapt the CIS to modern realities.

The agreements included reforming the CIS Economic Court. It will be transformed into a new, optimised ad-hoc format, which implies the transition of judges’ work to a non-permanent basis, drastic reduction in the number of its staff and, as a result, saving funds for its maintenance.

The heads of delegations also approved documents relating to law enforcement. The measures to implement legal, organisational and information-analytical issues approved by the ministers seek to strengthen interaction between CIS member states in this area.

Participants of the council have traditionally paid special attention to cultural and humanitarian cooperation. The parties fully supported the “Cultural Capitals of the Commonwealth” draft programme. Kazakhstan proposed to name Shymkent as the cultural capital of the CIS in 2020. Armenian Goris will be given this status in 2018, and the city of Brest in Belarus in 2019. Astana was the cultural capital of the Commonwealth in 2012 and Almaty in 2014.

During a meeting in a narrow format, the foreign ministers discussed regional and global issues. Abdrakhmanov informed his colleagues on the work carried out by Kazakhstan over the first 100 days as a non-permanent member of the UN Security council and dwelled upon the priorities of the country indicated in the political address by President Nazarbayev to the members of UNSC. 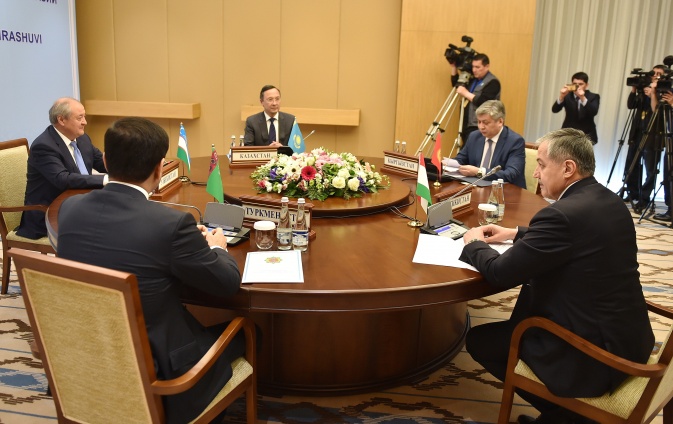 Abdrakhmanov also held bilateral meetings with his colleagues from CIS member states on the sidelines of the meeting.

Talks with the head of the Kyrgyz Foreign Minister Erlan Abdyldaev symbolically took place on the eve of the 20th anniversary of the Treaty on Eternal Friendship between the Republic of Kazakhstan and the Kyrgyz Republic signed in Almaty April 8, 1997. The sides reaffirmed their commitment to strengthen relations in the spirit of the abovementioned treaty.

The meeting with the Tajik Minister Sirojiddin Aslov also took place in a friendly atmosphere in the light of the upcoming exchange of ratification instruments for the entry into force of the Strategic Partnership Agreement between Kazakhstan and Tajikistan signed in Dushanbe Sept. 14, 2015.

Finally, Abdrakhmanov took part in the regular meeting of foreign ministers of Central Asian states, which saw a thorough exchange of views on the situation in the region, ways of intensifying regional cooperation in priority areas and avenues to strengthen cooperation within international and regional organisations.

Abdrakhmanov informed his colleagues in detail on Kazakhstan’s work in the UNSC, mainly in the context of promoting the common interests of the region at this high platform and transforming Central Asia into a “zone of peace, cooperation and security”, as Nazarbayev said in his address to UNSC members.