Kazakh Ambassador to Azerbaijan Beibit Issabayev recently sat down with The Astana Times to discuss the countries’ bilateral relations in the wake of Kazakh President Nursultan Nazarbayev’s April 3 official visit to the country. 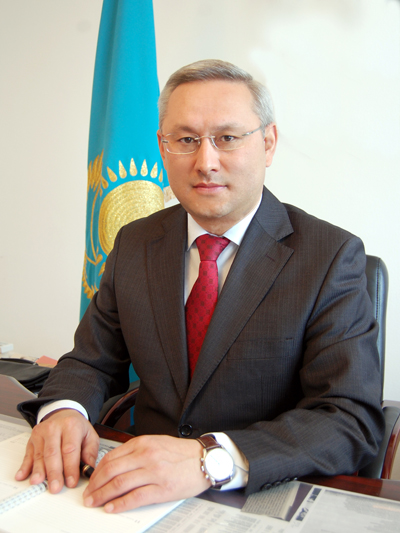 What is your assessment of the recent visit of the head of state to Azerbaijan?

Moreover, they considered new avenues for cultural and humanitarian cooperation between Kazakhstan and Azerbaijan. The heads of state discussed the possibility of holding youth forums, days of culture of our countries and other events.

Particular attention was paid to the Kazakhstan-Azerbaijan Intergovernmental Commission on Economic Cooperation (IGC). Following the visit, the IGC received specific instructions, in particular, the President of Kazakhstan instructed to study the export and import pattern of the two countries and identify commodity items both sides might be interested in. Moreover, he instructed to develop a road map indicating the specific list of goods produced in both countries and the possible scope of supply. The sides also agreed to hold the 14th IGC meeting in Baku this May.

Following the visit, it was also decided to establish a bilateral working group to resume supplies of Kazakh grain to the Azerbaijani market and increase the supply of agricultural products to Kazakhstan. In addition, the prospects of cooperation in shipbuilding will be discussed jointly with Azerbaijan, in particular, through placing Kazakh orders in shipbuilding enterprises of Azerbaijan or creating a joint venture.

In short, the dialogue, during which all issues for discussion were addressed, was fruitful and constructive. The main outcome of the official visit was the signing of the joint declaration by the two presidents, as well as nine various intergovernmental and interagency agreements.

How do bilateral relations develop in general? How do you assess trade and economic cooperation between our countries?

As I have already said, Azerbaijan is our key political and economic partner in the Caucasus. We are optimistic about the prospect of further progressive development of bilateral relations. President Nursultan Nazarbayev and the former President of Azerbaijan Heydar Aliyev, who is referred to as the National Leader, laid the basis for these close relations. Today, these relations continue to develop under the current President of the Republic of Azerbaijan, Ilham Aliyev.

I want to note that the sides mutually support each other’s foreign policy initiatives. This resulted in the support of Astana’s bid for the Astana EXPO 2017 specialised international exhibition and support of Kazakhstan’s bid for a non-permanent seat on the UN Security Council for 2017-2018. We, in turn, voted for Azerbaijan as a member of the Executive Council of the World Tourism Organisation.

As for bilateral trade and economic relations, I can say that Kazakhstan and Azerbaijan closely cooperate in many areas. At the end of 2016, mutual trade turnover amounted to $124.38 million, which is up by 7.9 percent compared to 2015. It is worth noting that in previous years these figures were significantly higher. This is due to the global economic recession and the difficult situation in the world economy. However, during the visit we considered additional internal reserves for the growth of mutual trade. The Kazakh President cited the example of Azerbaijan’s annual purchase of cigarettes worth more than $250 million, imports of black metal and copper for $260 million, as well as agricultural products and other goods worth hundreds of millions of dollars from other countries. In this regard, it was suggested to consider a mechanism under which the sides could use goods produced in both countries.

An important aspect of bilateral cooperation is the operation of the seaports of Kuryk (Kazakhstan) and Alat (Azerbaijan) on the Caspian Sea. In December 2016, we completed the construction of a ferry complex in Kuryk with a planned capacity of up to four million tonnes of cargo per year. It will focus on the transhipment of oil products, grain, chemicals, fertilisers and other cargoes and will ensure the transhipment of goods without unloading them from cars. Two ferry terminals for cargo vehicles have been built in the port. The first cargo arrived from Kuryk to the Baku International Sea Trade Port on March 24. It should be noted that the shipping time was reduced to 18 hours, while it took 22 hours to ship from Aktau.

On March 1, Kazakhstan, Azerbaijan and Georgia agreed terms for cargo transportation by rail and ferry in the directions of Alat-Aktau-Alat and Alat-Kuryk-Alat.

Port Kuryk is located along the Trans-Caspian International Transport Route (TITR), which is of great importance for handling the increasing volume of goods in this direction. Given further implementation of transport projects in our countries, we need to increase interaction between our ports, regulate their operation, and develop common standards for customs and other formalities.

Today, global geopolitics is undergoing great changes and the world economy is experiencing another crisis. However, we have sufficient potential to overcome this crisis together. And today our task is to use it in the right way.

What joint projects do our countries have today?

The joint Kazakh-Azerbaijani enterprise Baku Grain Terminal LLC (BGT) for receiving and transhipping Kazakh grain has been operating in Baku since 2007. Along with supplying high quality grain to Azerbaijan, BGT serves as an important link in the re-export of Kazakh grain to the Caucasian and Black Sea regions, as well as to the EU countries.

The basis of the enterprise is a grain terminal equipped with five silos for temporary storage of grain with a total capacity of 15,000tonnes. The terminal’s production capacity for grain transhipment is 300 tonnes per hour, and the annual transhipment volume reaches 500,000 tonnes of grain. In this regard, during the visit, the President of Kazakhstan instructed to develop a mechanism for additional grain supply to Azerbaijan this year in the amount of 200-300 thousand tonnes in order to fully utilise the BGT capacity. Moreover, the relevant ministries and agencies were instructed to consider the possibility of subsidising the supply of Kazakh grain to Azerbaijan in the future.

Cooperation continues with the Accord Company on the construction of the international transport highway Western Europe – Western China in the Kyzylorda and South Kazakhstan oblasts, as well as on the Shymkent-Tashkent highway reconstruction.

In 2013, at a meeting with President of Azerbaijan Ilham Aliyev the Kazakh President brought up the need to increase the supply of fruit and vegetable products from Azerbaijan to Kazakhstan, as well as to build a large logistics centre in western Kazakhstan. Following the agreements, 2014 saw the beginning of the construction of the Centre of Production and Logistics Azersun in the Aktau Seaport (Special Economic Zone) SEZ. To date, the construction is completed and the centre is now operational. Its capacity is 10,000 tonnes of fruit and vegetable products, 2,500 of which are fresh vegetables and fruit. This was helpful in resolving the issue of food supply to arid western regions of our country. And right after Baku, during his regional visit to the Mangistau oblast, the head of state was briefed on the work of the centre and instructed to increase its capacity, ensuring not only the storage of fruit and vegetable products, but also their processing.

The head of state commended the collaborative momentum between railway agencies of the two countries given by Kazakhstan, including the Agreement on Strategic Cooperation between Kazakhstan Temir Zholy National Companyand Azerbaijan Railways in the field of logistics and railway transport engineering, signed during the visit of President of Kazakhstan Nursultan Nazarbayev to Azerbaijan. The agreement includes a paragraph on the guaranteed supply of Kazakh railroad products to Azerbaijan worth more than $500 million during 2017-2020.