ASTANA – Altynai Berik is a fifth-grader from Kyzylorda whose name became known throughout the nation last year when President Nursultan Nazarbayev presented her with a book. The 10-year-old writer has been recognised as the youngest author and given a special award. 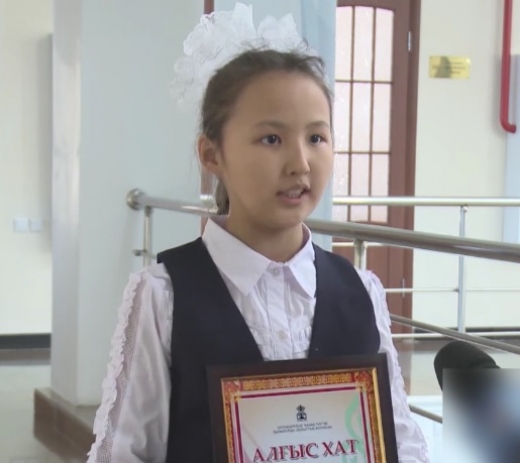 “I create fairy tales by myself. They are especially good when I have inspiration. As soon as I write something, I immediately hasten to share it with my relatives, ask them for advice,” said Berik, according to Channel 1.

She started writing her own stories at age seven and the first audience was her family. They sent her first fairy tale, Ak Kozhek (White Hare), to Baldyrgan, a Kazakh language magazine for children distributed throughout the country. The story was picked by editors and published, which inspired the author to continue her work, said her grandmother, Sholpan Yespayeva, according to kzvesti.kz.

“At first, Altynai began to draw animals; then she began writing a story for each of them and after, there were long stories. So, we realised that she has a talent. Sometimes I help her, give her advice. We hope that our granddaughter will be a famous writer in the future,” she said.

Although the storylines are inspired by everyday life, Berik’s main characters are animals. Her favourite fairy tales are Tuiye (Camel), Kyzyl Koraz (Red Cock) and Tauyk pen Kushik (Chicken and Puppy). Like all fairy tales, they show the struggle of good and bad and the importance of friendship and love.

Every story takes about three-seven days to write. The young author, who is also an excellent student, has composed nearly 40 stories.

The winner of many regional and national competitions, Berik was awarded the title “the youngest author.” One of her recent wins was at the Ush Baiterek contest and her works have appeared in several publications and magazines.

Berik wrote a letter to Nazarbayev last year congratulating him on Constitution Day. In response, the head of state presented her with the book “In the Heart of Eurasia.” The event was widely covered and the young author’s name reached many corners of the country.

As for her future, Berik dreams that her hobby will grow into becoming a writer or journalist.