ASTANA – Kazakhstan is undertaking major political steps to strengthen the country’s position in the world and become an ever-better model of peace and friendship. The deep religious commitment of tolerant, generous people can help maintain harmony and mutual understanding between all of Kazakhstan’s people and, indeed, all people, Chairman of the Spiritual Administration of Muslims of Kazakhstan (SAMK), Supreme Mufti Yerzhan Kazhy Malgazhyuly said in an exclusive interview with The Astana Times. 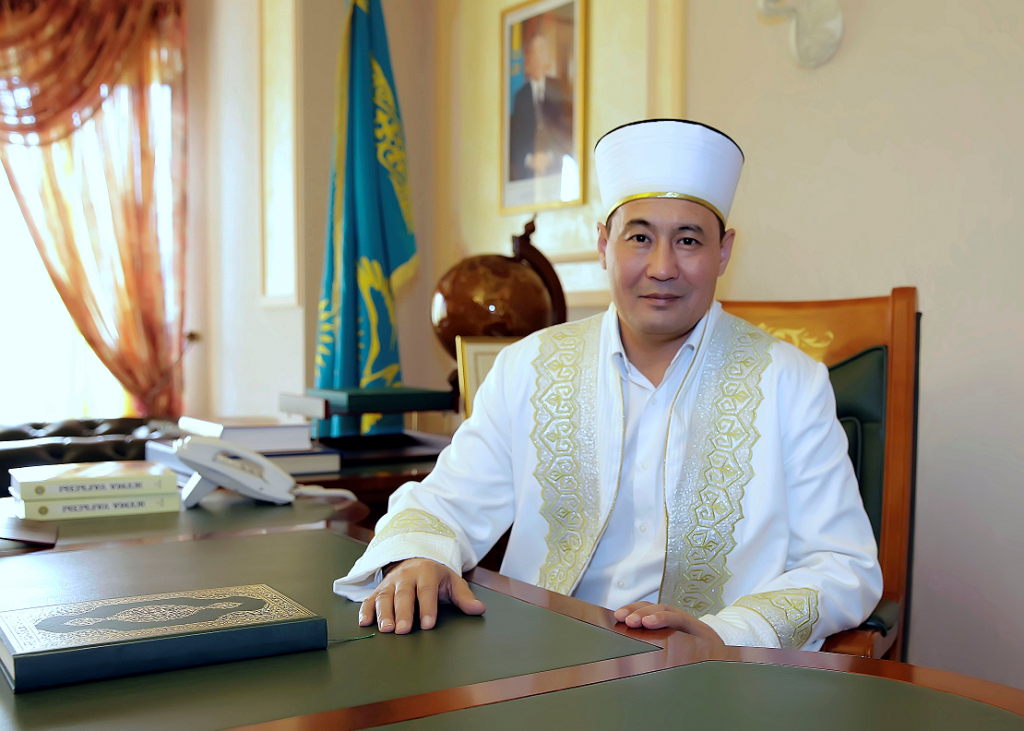 “Islam is a religion of peace and justice in the fullest sense of the words. It cultivates character this way. This means that we … should strive towards such lofty goals. Only virtue and good deeds can bring a person closer to the Creator,” he said.

Year of Religion and Historical Heritage

The SAMK declared 2016 the year of Religion and Historical Heritage, and throughout the year created publications and held religious and cultural events.

The year also helped highlight the roots of Islam in Kazakhstan and the place the religion can take in society through films, articles and essays on Kazakhstan’s religious and historical figures and seminars on religion today.

“The purpose of this initiative was to justify the worldview school and the Sharia-based madhhab [school of thought], which are intertwined with our national roots,” Malgazhyuly said. “We were engaged in the publication of historical treasures, the ordering of the legacies of our ancestors, the restoration and revival of religious treasures of historical value. Thus, we wanted to contribute to the further spiritual development of our country.”

In addition, the Spiritual Administration published the book “Treasured Values of Traditional Islam.” The book covers religious songs and works of Kazakh zhyrau (narrators), religious figures and scientists. A contest was held among akyns (traditional singers) who performed religious songs to mark the book’s publication, with the winner getting a new car.

“This book can be considered a good beginning on the path to the revival of historical consciousness,” the Supreme Mufti explained.

The Spiritual Administration published other historical and religious books and held conferences, seminars and roundtables on the theme of Islam and secular society in the regions, he continued. As UNESCO had declared 2016 the year of Khoja Ahmed Yassawi, whose mausoleum is in Turkestan, an international conference dedicated to Yassawi’s work was organised.

The Spiritual Administration intends to continue to do work to bring the nation’s significant religious and historical figures to light, Malgazhyuly said.

“Allah Almighty created mankind by dividing them into different nationalities, and this is the grace of our Creator,” the Supreme Mufti explained. “The Holy Quran tells us: ‘…have made you nations and tribes so that you would recognise each other.’”

Kazakhstan is growing steadily and members of different nationalities and ethnic groups live peacefully and harmoniously, here, he pointed out. This should be supported by religion.

“Religion should strive to establish peace and justice in the state, in society; it educates a person towards this. The Spiritual Administration of Muslims of Kazakhstan also strives for such good goals, exalts the values of unity and harmony. Because, in the Holy Quran, the Most High commanded: ‘Do not separate.’ The Prophet Muhammad … urged the people to obey their Lord and not to spread discord. He ordered them to find mutual agreement,” the Supreme Mufti pointed out.

His organisation has established close ties with other faiths, he said. “The Congress of Leaders of World and Traditional Religions … is a vivid example of the intention of the Kazakh people to strengthen unity and interreligious harmony. We are sure that the meeting of leaders of traditional religions has a fruitful impact on the development of interfaith relations,” he added.

The Supreme Mufti pointed out the expression, ‘In unity, there is prosperity.’

“To achieve such values, it is necessary to strengthen internal political stability and interethnic, inter-confessional relations,” he said. “Religious discord is causing clashes in some countries, where the blood of innocent people has been shed, children left orphans, women made widows.”

He praised Kazakh President Nursultan Nazarbayev’s launching of the Congress of Leaders of World and Traditional Religions to help end religious strife. The congress, he said, clearly expresses the peace-loving policy of Kazakhstan, and is a great opportunity, especially for Muslims, to stop the spread of Islamophobia.

Muslims from 27 nationalities and ethnic groups make up 70 percent of the population of Kazakhstan, the Supreme Mufti noted, and by contributing to unity and harmony in the country, they are a vivid example for their compatriots.

In this respect, the religious servants of the mosques also bear a great responsibility, the Supreme Mufti said.

“In strengthening unity and harmony between peoples and ethnic groups, inter-confessional mutual understanding has a very great influence.” True Muslims must not ridicule or insult each other, but seek harmony, as between brothers, he said.

“Thus, Islam is a powerful spiritual force that can positively influence the formation of a person’s worldview and character,” he pointed out. And a dialogue between Islam and other faiths helps support harmony – which is why Kazakhstan’s efforts to support multi-confessional conversations are so important.