By Aigerim Seisembayeva in Central Asia, International on 31 March 2017

ASTANA – Kazakh Foreign Minister Kairat Abdrakhmanov attended a joint meeting March 28-29 of the foreign ministers of France, Kazakhstan, Kyrgyzstan, Tajikistan, Turkmenistan and Uzbekistan devoted to the 25th anniversary of diplomatic relations between the French Republic and the countries of Central Asia. 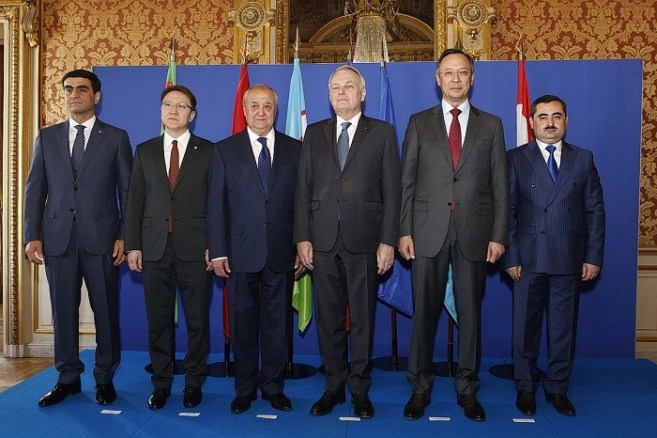 Speaking at the joint meeting with Ayrault and his regional counterparts, Abdrakhmanov said Central Asia has become one of the dynamically developing regions of the world.

“We are aiming at making Kazakhstan a pole of economic growth and stability in the region and are open to the widest cooperation with our French partners and our neighbours in the region,” he said.

He stressed that Kazakhstan is committed to the principles of equality and mutually beneficial cooperation in its relations with Central Asian states.

“We are pleased with recent positive trends in the region’s development. This proves once again that there are no unsolvable problems in the relations between Central Asian countries,” Abdrakhmanov highlighted. 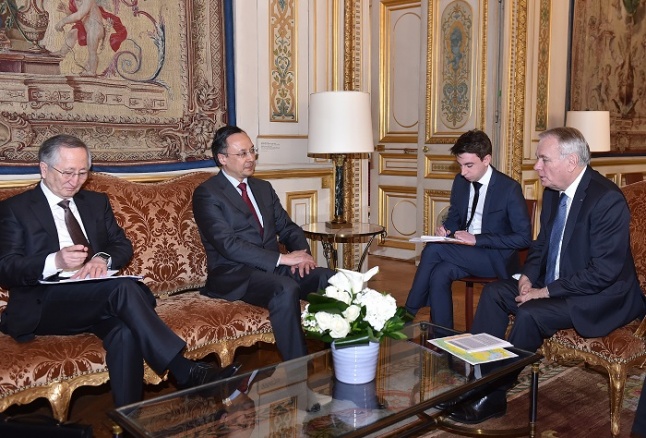 He expressed confidence that a model of a regional zone of peace, security, cooperation and development can be formed and tested in Central Asia, combining the interests of all the countries of the region. In this regard, he noted the importance of France’s leading role in addressing global issues related to climate change, water, food, energy and nuclear security, reaching sustainable development goals, combatting terrorism and protecting cultural heritage.

Abdrakhmanov reaffirmed the importance of the European Union-Central Asia High-level Dialogue on Politics and Security. He also advocated the creation of a new platform for cooperation between Central Asia and the EU called “Economic development, investment, employment, private sector development.” Currently there are three such platforms focusing on security, education and the environment.

At a bilateral meeting with Ayrault, the sides summed up the results of the 25-year comprehensive cooperation between Kazakhstan and France and outlined concrete steps to further promote Kazakh-French relations.

According to the Kazakh foreign ministry, the ministers exchanged views on international issues, including the situation in Afghanistan, the settlement of the Syrian conflict and the role of the Astana Process in that, as well as threats and challenges of international terrorism and violent extremism.

Abdrakhmanov and Ayrault further noted the importance of France’s participation in the upcoming EXPO 2017 in Astana. Paris intends to demonstrate its latest green technologies at the exhibition and organise about 50 cultural events.

At a meeting with Bokova, Abdrakhmanov praised the joint work with UNESCO on implementing the initiatives of Kazakh President Nursultan Nazarbayev that were voiced during the 38th session of UNESCO General Conference in November 2015. He also noted that, taking into account the potential of Almaty city as a regional hub for international organisations, including UN agencies, Kazakhstan is ready to provide full support to the establishment of the International Centre for Rapprochement of Cultures under UNESCO auspices in Almaty.

The sides reaffirmed the high level of partnership and thoroughly discussed the joint activities on including various cultural and natural heritage sites in the UNESCO international registries. Bokova also informed about her intention to visit Kazakhstan in September.

Also on March 29, Abdrakhmanov and Gurría discussed improving the institutional environment and economic growth in Kazakhstan using the best practices of OECD countries. The sides also dwelled upon extending the country programme until 2018, improving Kazakhstan’s status in OECD committees and Kazakhstan’s pilot projects for Afghanistan within the framework of Kazakhstan’s official development assistance system.

The head of the OECD said the members of the organisation are impressed by the progress Kazakhstan has made in implementing OECD recommendations. He thanked President Nazarbayev for the fact that OECD experience and standards are taken into account in the formation of national economic policy. Gurría presented several reports and studies to Abdrakhmanov with recommendations to further promote economic reforms in the country.