By Malika Orazgaliyeva in Central Asia, International on 14 March 2017

ASTANA – Kazakh Foreign Minister Kairat Abdrakhmanov informed the members of the Mazhilis (lower house) of Parliament about the nation’s priorities as a member of the United Nations Security Council (UNSC) in 2017-2018, as well as answered their questions on a wide range of issues, during the March 13 so called “government hour”. 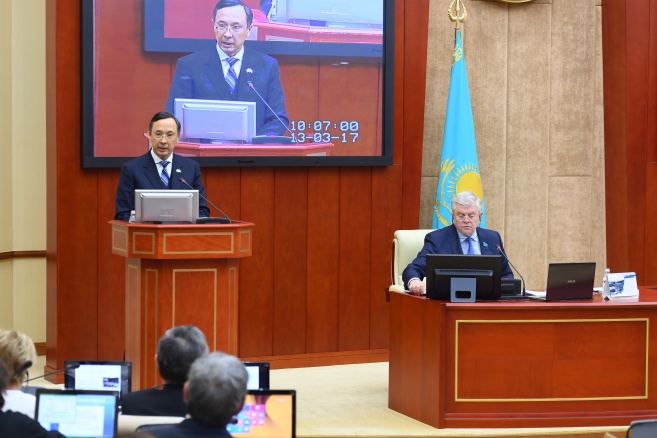 Kazakhstan is the first Central Asian country elected as a non-permanent member of the Security Council, the minister said. It is a great responsibility and during the next two years, the nation will be required to respond adequately to global challenges on a daily basis.

The country’s priorities, as outlined in a January 2017 political address from President Nursultan Nazarbayev, include moving towards a world free of nuclear weapons, preventing the threat of global war, promoting peace in Afghanistan and creating a regional peace zone in Central Asia, shaping a global antiterrorist coalition (network) under UN auspices, promoting Africa’s peaceful development, adapting UNSC’s activities to the demands of the 21st century and elaborating a set-up for regular meetings of UNSC member states at the head of state and government level to strengthen a collective political will to address global challenges. 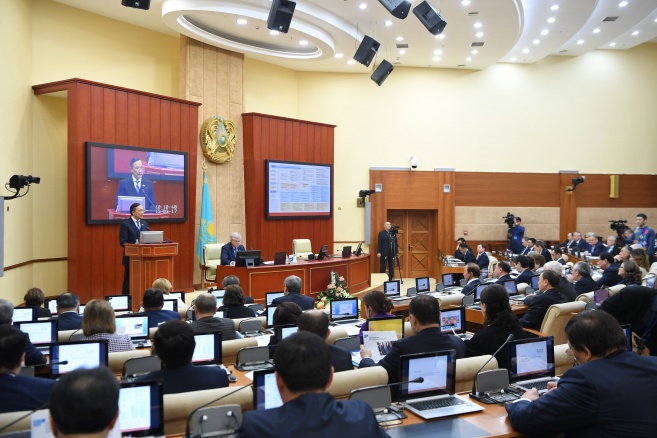 “Our country started its responsible mission from Jan. 1. Today, Kazakhstan’s delegation is actively involved in the discussion of the Security Council’s agenda,” said Abdrakhmanov. “Kazakhstan will chair the UNSC in Jan. 2018 with the main focus on Central Asia and Afghanistan.”

Based on its authority, he added, Kazakhstan has been entrusted with chairing the Security Council committees on Afghanistan/Taliban (Committee 1988), ISIL/DAESH/Al Qaeda (Committee 1267/1989/2253) and Somalia/Eritrea (Committee 751/1907).

Abdrakhmanov noted Kazakhstan will continue with its drive for a nuclear weapons-free world and, building on top of past years’ events, this year will host the 60th Pugwash Conference on Science and World Affairs in the Kazakh capital on August 29, the UN-designated International Day Against Nuclear Tests. Also on that day,  the International Atomic Energy Agency (IAEA) low-enriched uranium (LEU) bank is expected to be formally launched, the minister said.

Kazakhstan has called for further improvements in the UN peacekeeping system and intends to make its own contribution by increasing its number of military observers and peacekeepers to UN missions. Kazbat, Kazakhstan’s peacekeeping battalion, established in 2000, is fully equipped and staffed with highly qualified and professional officers and soldiers, according to Deputy Defence Minister Major-General Talgat Mukhtarov, who also participated in the event.

The proposed Astana Code of Conduct is a common mechanism of fighting terrorism which will help in the formation of the UN Global Anti-Terrorist Coalition (Network) to defeat terrorism and reduce the global terror threat, said Abdrakhmanov.

The minister spent a great deal of time talking about Kazakhstan’s relations with other nations in Central Asia as one of its top priorities. He noted the country’s security is closely linked that of Central Asia and stressed the importance of strengthening cooperation among regional security organisations.

“Kazakhstan is a bridge between East and West. As the OSCE (Organisation for Security and Co-operation in Europe) chair and a UNSC member, we have always promoted greater dialogue… and we want the UN tribune to be used by the CSTO (Collective Security Treaty Organisation), SCO (Shanghai Cooperation Organisation), NATO (North Atlantic Treaty Organisation) and European Union (EU) to deliver joint approaches to tackling common problems,” he said, listing a “whole gamut” of problems facing Central Asia such as drug trafficking, terrorism and religious extremism.

“Together with international organisations, we can focus on, for example, issues of trans-boundary rivers in Central Asia,” Abdrakhmanov said.

He added Central Asia holds regular dialog platforms with Japan, South Korea, the United States, the EU and India and a similar discussion is planned with France where the minister is invited at the end of the month.

“I also sent a letter to my colleagues in Central Asia proposing to establish a common forum of the five countries at our level. There are no unresolvable issues between our countries. Kazakhstan’s membership on the UNSC is a unique opportunity to attract the world’s attention to the Central Asian region,” the Kazakh diplomat said.

“We intend to take practical steps with Kyrgyzstan to help them adapt to Eurasian Economic Union (EAEU) membership. We are also talking about adopting comprehensive programmes to implement our strategic partnerships with the countries of Central Asia,” he added.

“On March 22-23, Uzbek President Shavkat Mirziyoyev is planning to visit our country. It is another example of mutual intentions to strengthen ties,” said Abdrakhmanov.

“Our humanitarian assistance is always welcome, but we need to expand official development assistance (ODA) and that sphere needs to expand, too,” he noted.

Abdrakhmanov further highlighted the importance of economic diplomacy for the country’s foreign ministry.

“Economic diplomacy is not only a top priority, but also the main criteria of assessing the effectiveness of our embassies,” he said. “In partnerships with other agencies, we are building up mechanisms for attracting investments and promoting exports.”

Elsewhere, he noted the issues of resolving the legal status of the Caspian Sea is moving forward, adding the ministerial meeting will need to be held before the Caspian summit takes place in the Kazakh capital where the relevant convention is expected to be signed.

During the Q&A session, he responded to a query concerning Kazakhstan’s initiative to strengthen global development efforts by proposing that UN member nations voluntarily contribute one percent of their annual military budgets to achieving the Sustainable Development Goals (SDGs).

“We have to recognise that some countries instead seek to expand their military budgets. We will continue to pursue our goal, however,” he said.

Abdrakhmanov added holding EXPO 2017 in the capital and creating the international centre for transfer of green technologies under UN auspices will be Kazakhstan’s practical contribution to implementing regional and global goals.