By Kamila Zhumabayeva in Nur-Sultan on 17 March 2017

ASTANA – A month-long exhibition titled “Kazakhstan and Russia: a strategy of eternal friendship” dedicated to 25 years of diplomatic relations opened March 16 at the National Museum of Kazakhstan. 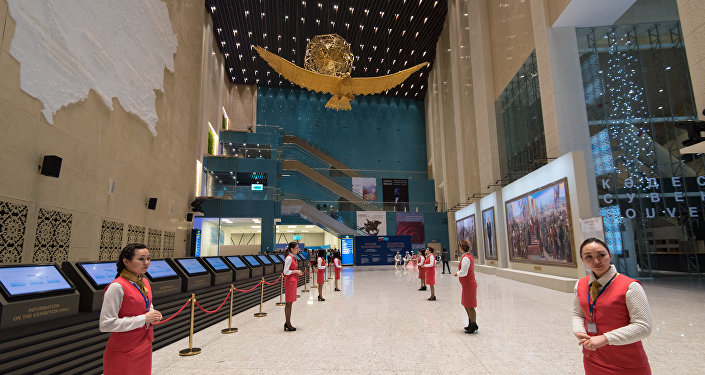 “For a quarter of a century Kazakhstan and Russia has built a positive model of good-neighbourly relations and friendship, prolific trade and economic and humanitarian cooperation and strategic partnership. This model is based on a foundation of a high level of trust between our nations,” said Marat Tazhin, first deputy head of Kazakhstan’s Presidential Administration, relaying a message from President Nursultan Nazarbayev.

“I am convinced that the exhibition will serve the strengthening and deepening of interaction of the two countries on multiple aspects of our bilateral cooperation and will also reflect a strategic vector of good-neighbourly relations and alliance in relations between Kazakhstan and Russia,” stated Nazarbayev’s message.

The exhibition contains documents reflecting the history of Kazakh-Russian cooperation in industry, energy, space, the military-industrial complex, culture, science and education, a press release from the museum said.

Documents used at the exhibition are from the archive funds of the two countries. More than 300 agreements and contracts allow the efficient resolving of diverse tasks on interstate, intergovernmental and interregional levels, the release said, adding that some of those documents are currently exhibited.

“Materials presented at the exhibition will be able to fully demonstrate a peculiar nature of relations between Russia and Kazakhstan that have become an example of true strategic partnership and alliance,” said head of the department of Russia’s Presidential Administration on interregional and cultural affairs with foreign countries Vladimir Chernov, relaying a message from Russian President Vladimir Putin.

The exhibition is organised by the Federal Archival Agency of Russia and the Kazakh Ministry of Culture and Sports. Government and political figures of the two countries as well as cultural and scientific intelligentsia from Kazakhstan and Russia attended the opening.