Air Astana, Lufthansa passengers can use single code to fly on both airlines

ASTANA – Air Astana and Lufthansa signed March 15 a codeshare agreement to increase from 7 to 14 the number of weekly flights between Kazakhstan and Germany. The increase will take effect March 26. 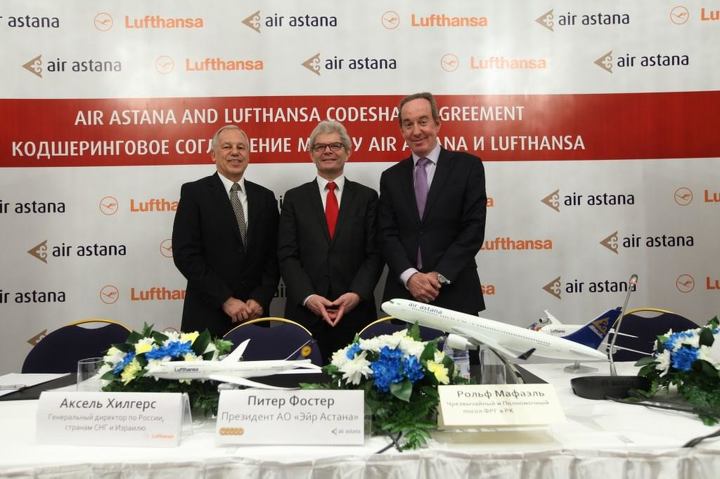 “I’m delighted that the longstanding cooperative relationship between Air Astana and Lufthansa is being further strengthened with the signing of the codeshare agreement. Passengers flying from Almaty and Astana to Frankfurt can now enjoy a greater choice of flights to best suit their schedules and the convenience of simply using the ticket of either of the two airlines,” President and CEO of Air Astana Peter Foster said.

“This codeshare agreement is great news for our customers as it makes Kazakhstan more accessible. Passengers of both Lufthansa and Air Astana will have a much greater choice in flight options. Kazakhstan is one of the fastest-growing economies in the world and we highly welcome Air Astana as our new partner and as the leading airline to and from the Central Asian region,” Lufthansa Senior Director Sales in Russia, the Commonwealth of Independent States and Israel Axel Hilgers said.

He emphasised that Lufthansa has never signed such agreements with airlines from the territory of the Commonwealth of Independent States. Air Astana is the first airline from the region to have signed such contract with Lufthansa.

German Ambassador to Kazakhstan Rolf Mafael said the agreement is a positive addition to bilateral relations and will bring the peoples of Kazakhstan and Germany closer together.

The ambassador noted that this year both states celebrate the 25th anniversary of diplomatic relationship and that the partnership is strengthened further by the cooperation of the companies.

He also said Germany will have one of the three biggest pavilions at the EXPO and he hopes that as many Germans as possible will visit Kazakhstan.

Mafael said approximately 50,000 Germans, who are former Kazakhstan citizens, come to Kazakhstan each year, their former homeland, and he is glad to know the agreement will make their travelling easier and more comfortable.

Foster highlighted that new agreement is a winning step for both companies and their passengers.

Clients of the companies will enjoy the convenience of flying with a single ticket, using a single code from their airline that can be used for check in for both baggage and boarding pass and registration.

Foster also said that Air Astana will move to Terminal 1 at Frankfurt Airport to provide an increased convenience for its passengers and ease connectivity with Lufthansa.

Hilgers called Air Astana the leader in the Central Asian region and reported that all Lufthansa clients using the Miles and More programme will also be able to use it flying with Air Astana.