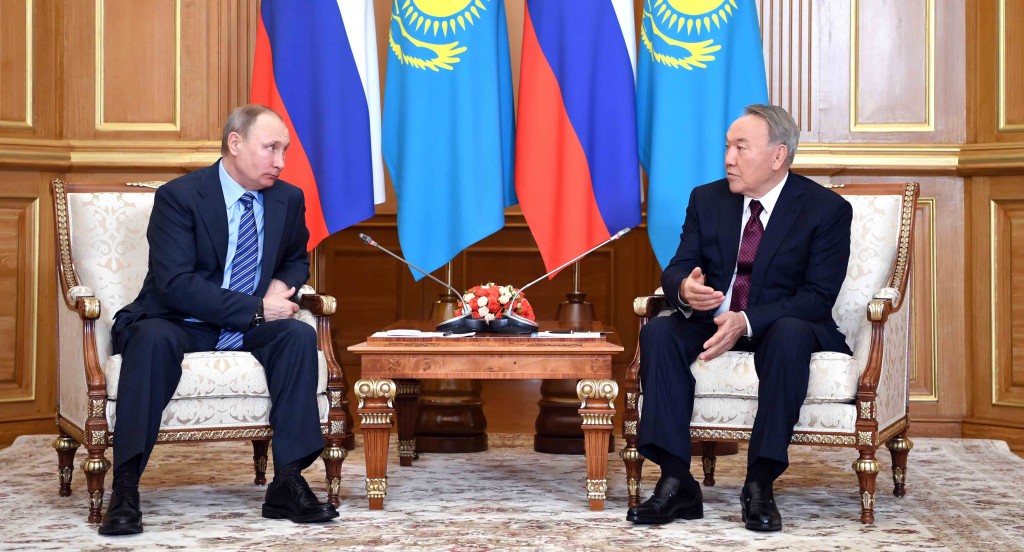 During the meeting, Nazarbayev stressed the close and trusting relationship between the two countries.

“This year marks 25 years since the establishment of diplomatic relations between us. The Eurasian Economic Union (EAEU) was established thanks to our close partnership. In my opinion, it is an important and promising establishment for all the participants. Today, more than 7,000 Russian companies are registered in our country. They are contributing to the creation of a new processing industry. Your visit to Kazakhstan in autumn 2016, as well as our St. Petersburg meeting in the framework of the (Eurasian Economic Council) allowed us to sign 41 contract worth $3 billion,” he said, according to an Akorda press release.

Nazarbayev noted Kazakhstan and Russia have similar positions on many international issues and that Kazakhstan’s membership in the UN Security Council in 2017-2018 will help implement common objectives.

“Russia is taking measures to address the topical international issues, including the settlement of the Syrian conflict. Russia proposed to hold several rounds of talks in Astana. The process has started. In general, a series of meetings will be organised throughout the year in order to address this and other issues, including in the framework of the Shanghai Cooperation Organisation on June 8 in Astana. We solve all the current issues in a friendly manner. We shall be moving forward, creating joint ventures along the way,” Nazarbayev stated.

Putin thanked his counterpart for the organisation of the Astana Process to help resolve the conflict in Syria.

“I know that Kazakhstan has played a positive role in this process not only as an organiser. You personally took part in the organisation of meetings, as well as worked with the participants and delegates. Thanks to you, it became possible to achieve) results which never had been achieved earlier. The established mechanism of control over the ceasefire is the most important thing. This is the foundation for further negotiations in Geneva,” Putin said.

He further noted the importance of Kazakhstan as a key economic partner for Russia and stressed the need to expand trade and investment cooperation, including thanks to the conditions established as part of the integration process.

The Russian leader expressed hope for Kazakhstan’s support in dealing with global issues as of a non-permanent member of the UN Security Council.

During the meeting, the sides also discussed Eurasian integration and economic cooperation.

The day before the official meeting on Monday, Nazarbayev and Putin met informally, to ski at an Almaty resort.

On Feb. 27, Putin left Almaty for Tajikistan, and he is also scheduled to visit Kyrgyzstan as part of his Central Asian tour.