By Aigerim Seisembayeva in International on 7 February 2017

ASTANA – Chairperson of the Chamber of Deputies of the Parliament of the Czech Republic Jan Hamáček met with Kazakh President Nursultan Nazarbayev, Speaker of the Mazhilis (lower house of Parliament) Nurlan Nigmatulin and visited a Kazakh-Czech business forum during his Feb. 6 official visit to Astana. 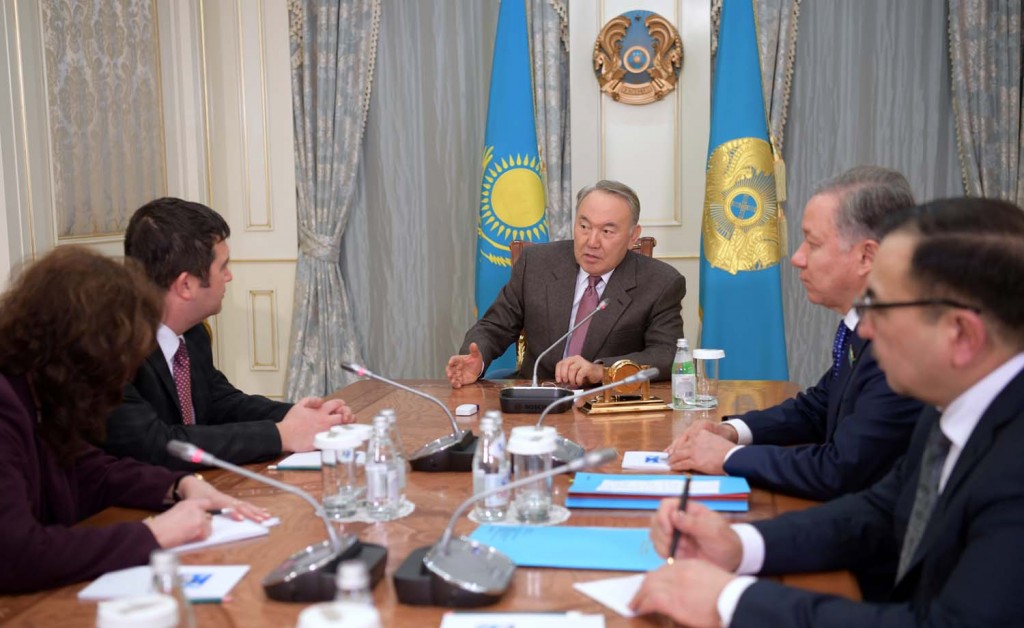 During the meeting with the Kazakh President, the sides discussed bilateral cooperation, including economic and political cooperation.

“Your visit is very important. We have initially established good relations with the Czech Republic. President of the Czech Republic Miloš Zeman has previously visited our country. Now we are expecting him at the opening of the EXPO 2017 exhibition,” Nazarbayev said.

Hamáček noted Kazakhstan’s successes over the last quarter-century, congratulated the country on its 25th anniversary of independence and wished the country continued success.

Nigmatulin emphasised the Czech Republic is an important political and economic partner of Kazakhstan in Central and Eastern Europe. The current visit, the chairperson of the Mazhilis emphasised, would give a new impetus to bilateral cooperation, particularly inter-parliamentary relations. The sides discussed the key directions of the address of President Nazarbayev to the people of Kazakhstan as well as the proposed constitutional reforms.

The parties also noted Astana and Prague have friendly relations made possible through high-level contacts. The meetings of the heads of state confirmed a desire to deepen bilateral cooperation.

The sides particularly noted Kazakhstan’s tenure as a non-permanent member of the UN Security Council for the coming two years. Special attention was given to the Astana talks on a Syrian settlement, which were held with the support of the Kazakh President. The parliamentarians discussed Kazakhstan’s expanded cooperation with the European Union and other European structures, as well as cultural and humanitarian, trade and economic cooperation.

Talking about Kazakhstan’s development over the years of independence, Hamáček noted, “The success is unique and is directly related to the personality of President Nazarbayev.”

Hamáček said the President of Kazakhstan’s contribution is significant in regional and global politics. Noting the initiative of the Kazakh head of state on the proposed constitutional reforms, the Czech MP stressed this step is worthy of an experienced politician with a keen sense of responsibility for his country. The sides noted the importance of the parliamentary component and called for expanding inter-parliamentary cooperation.

During Hamáček’s participation in the Kazakh-Czech business forum, he again confirmed the participation of Czech President Zeman at the opening ceremony of the EXPO 2017 exhibition.

“An important area of bilateral relations for Kazakhstan is mechanical engineering, in particular, the expansion of the Czech machine-building technologies. Assembly lines for Skoda Octavia and President Edition cars have been launched in Kazakhstan. Since 2005, Skoda production has amounted to 19,888 vehicles worth almost 70 billion tenge,” Dzhaksaliyev said.

However, the vice minister noted Kazakh–Czech partnership has not reached its potential. Indicators of turnover between the two countries remain low, including due to lower commodity and energy prices.

“Gross inflow of direct investment from the Czech Republic to Kazakhstan starting from 2005 to the nine months of 2016 amounted to only $186 million. Favourable conditions have been created for fruitful cooperation between the two countries. The Kazakh-Czech intergovernmental commission plays a key role in such economic cooperation, in particular in the economic, industrial and scientific-technical spheres. The ninth session of the commission is to be held in Prague on Feb. 28. A total of 16 agreements have been signed between Kazakhstan and the Czech Republic,” Dzhaksaliyev said.

He also informed Czech businesspersons about Kazakhstan’s investment climate and conditions for business development that have attracted more than $200 billion of foreign direct investment over the past ten years.

“We will welcome the participation of Czech businesses in the projects of the development of domestic high-tech export-oriented production in accordance with the priorities of our industrial and innovation policy,” he concluded.

Hamáček emphasised the delegation came to Kazakhstan to “give proof of the political dialogue between our two countries.”

“For us, Kazakhstan is the largest trading partner in Central Asia, and the real possibilities of our cooperation are much higher. Over the past two years, there has been a decrease in our trade. It is not that the Czech and Kazakh goods have lost their quality and appeal. Global external factors have played their role in this. Those include the continued drop in oil prices and other raw materials, trade and economic sanctions against Russia. I am sure that our countries have the opportunities that we need to find and develop,” Hamáček stated.