By Malika Orazgaliyeva in International on 17 January 2017 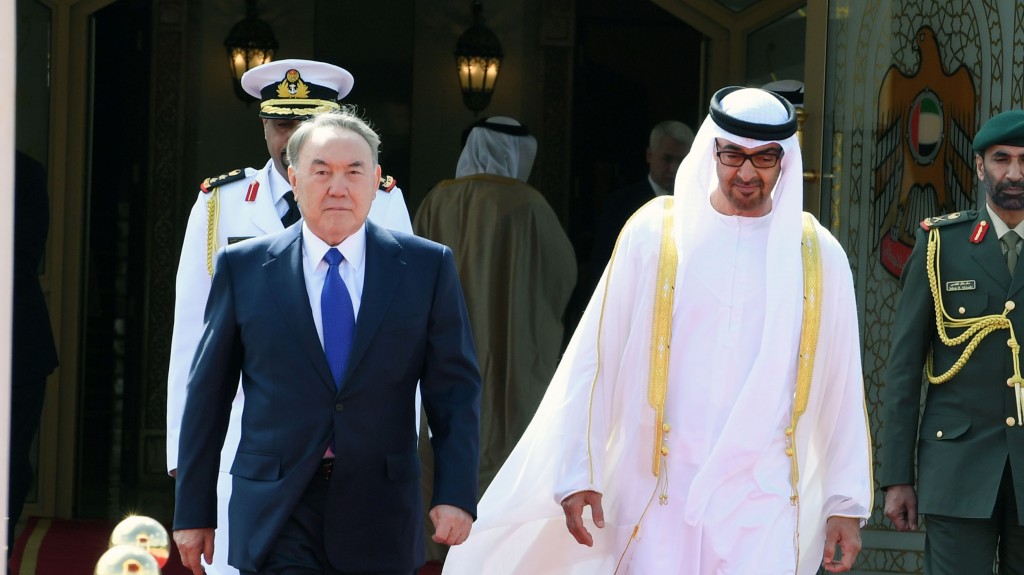 At the meeting with Calatrava, the sides negotiated long-term cooperation agreement between the corporation and Kazakhstan. Nazarbayev was presented with a few proposed projects in Astana. Calatrava Grace is a well-capitalised investor with an ability to invest alongside its clients, in global real estate projects, for up to $100 million per transaction. To date, the company has a portfolio of 340 projects in 32 countries with a total area of ​​1.9 million square metres.

Nazarbayev also met with the heads of leading, global-level UAE companies and noted that the UAE is one of Kazakhstan’s main Middle Eastern partners. In his words, there are about 200 enterprises with Emirates participation in Kazakhstan. The projects are being implemented in agriculture, industry and energy. Kazakhstan has budding cooperation with the Mubadala Development Company, which is a state-owned holding company.

The Kazakh President also emphasised the importance of the $1.6 billion Abu Dhabi Plaza being built in Astana. He also noted that Kazakhstan pays special attention to economic diversification and seeks to enter the top 30 most-developed countries.

“In order to achieve our goal, we provide comprehensive business benefits and create favourable conditions for attracting investment,” Nazarbayev said.

“During the years of independence, the total inflow of foreign direct investment into the country’s economy exceeded $265 billion. In the World Bank’s Doing Business ranking, Kazakhstan is ranked 35th. Today, citizens of 56 states can freely enter Kazakhstan without a visa, including UAE citizens,” Nazarbayev informed.

He highlighted Astana’s efforts to create more favourable conditions for business and investments. “For example, an investor is exempted from corporate income tax and land tax for 10 years and property tax for eight years,” he said.

“Kazakhstan is interested in the vast experience of the UAE in development of industrial zones. We are ready to transfer those zones under the management of Emirates companies,” he noted.

At the same time, Nazarbayev briefed UAE business leaders on the activities of the Astana International Financial Centre (AIFC) and new opportunities emerging from the Kazakh capital’s hosting of the upcoming international specialised exhibition EXPO 2017.

“In fact, the UAE were the first in the Arab world to confirm their participation in EXPO 2017 and to appoint a dedicated commissioner of its national pavilion. We hope that your pavilion will be among the most attractive at the EXPO this summer, as we know that the UAE pay much attention to the development of new energy technologies,” he said.

In the political area, Kazakhstan and the UAE are also important partners with the Arab country backing a number of Nazarbayev’s foreign policy initiatives. In particular, the country has joined the Conference on Interaction and Confidence Building Measures in Asia (CICA) and the Islamic Organisation for Food Security (IOFS), both headquartered in Astana.

On Jan. 16, Nazarbayev took part in the opening ceremony of the World Future Energy Summit and the awarding ceremony of the Sheikh Zayed Prize for a contribution to the advancement of the future energy agenda in the contemporary world, which was held with the participation of the UAE’s most senior officials, heads of states and governments from other countries, business leaders and recognised experts in the field.