“Implementation of one of the five institutional reforms that I proposed, includes giving the government additional executive powers in the economic field. The President will still be responsible for main issues in defence, foreign policy, governance, protection of the Constitution and effective work between branches of government,” President Nazarbayev said. 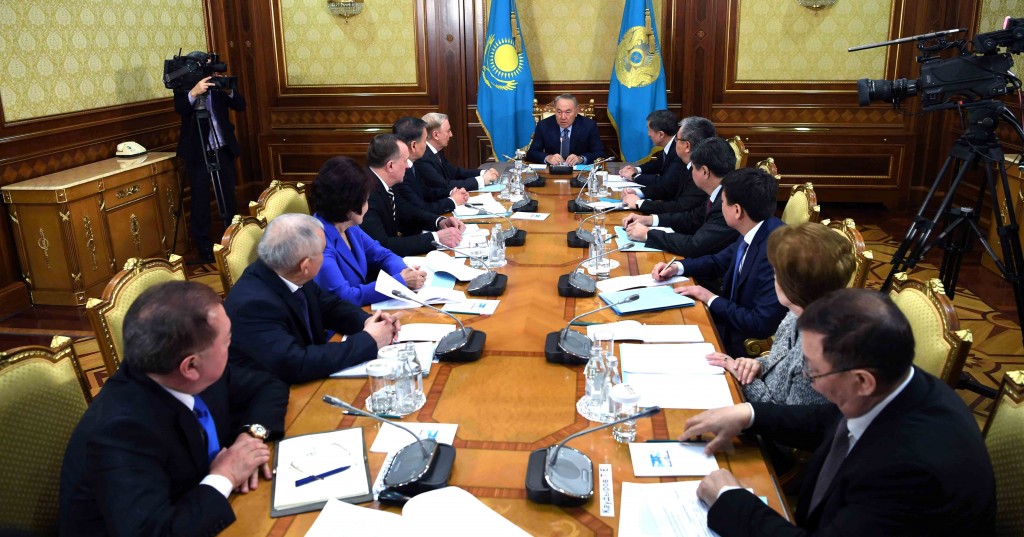 The head of state highlighted the reduction of the powers originally referred strictly to the competence of the Kazakhstan President.

“For example, such authority as programme approval, issues of personnel changes in the government, creation of new governing bodies can be transferred to the competence of the government and the Parliament,” he said.

The Kazakh President emphasised the need to strengthen the role of Parliament in the public administration system.

“In our conditions, the government is formed by the winning party or faction. Thus, the role of Parliament has to be revised in relation to the government on many issues,” President Nazarbayev said.

He also highlighted that state bodies will bear full responsibility for all reforms and their successful implementation.

The head of the working group Adilbek Dzhaksybekov, who serves as the president’s chief of staff, reported about developed proposals for a distribution of powers between branches of the government along three general lines.

First, he reported about the proposed redistribution of the statutory powers of the head of state, which do not require amending the Constitution. In general, proposals of state bodies that relate to the powers that govern the social and economic fields were mentioned, including: economic governance issues, finances, state property and the powers associated with the solution of certain issues of administrative-territorial structure.

Secondly, the Supreme Court and the Attorney General’s Office presented proposals to improve the judicial and law enforcement systems, which also do not require amending the Constitution. The proposals concern strengthening judicial control, further reducing the participation of prosecutors in civil and administrative proceedings. There were 13 such proposals.

Third, the working group considered approximately 40 proposals, which do imply amending the Constitution. Deputies, scholars and experts took part in the discussions. The proposals include the expansion of the powers of the Parliament and its chambers, including in the formation of the government. It was also proposed to strengthen the accountability of the government to the Parliament and its chambers.

There have also been proposals to strengthen the independence and responsibility of the government. Part of the proposals are aimed at possible clarification of the status and functions of the Supreme Court and determining the requirements for judges. It has been proposed to adjust the rules governing the status and powers of prosecutors. Proposals for improving the mechanism of constitutional control were offered as well.

Member of the working group and Minister of Justice Marat Beketayev presented analysis conducted by the government to determine the norms that perpetuate to the powers of Kazakhstan President. “We analysed 11 constitutional laws, 20 codes and 298 laws. The rules that establish the authority of the President are contained in the 11 codes and 80 laws. The government, together with the working group, developed 32 proposals for redistribution of powers of the head of state. These proposals involve amendments to the legislation and do not require amendments to the Constitution,” said Beketayev.

Chairman of Kazakhstan Union of Lawyers national public association Rakhmet Mukashev said that all subsidiaries of his association are discussing the analysis.

“The legal public supports the reforms, noting their relevance and timeliness,” he said.