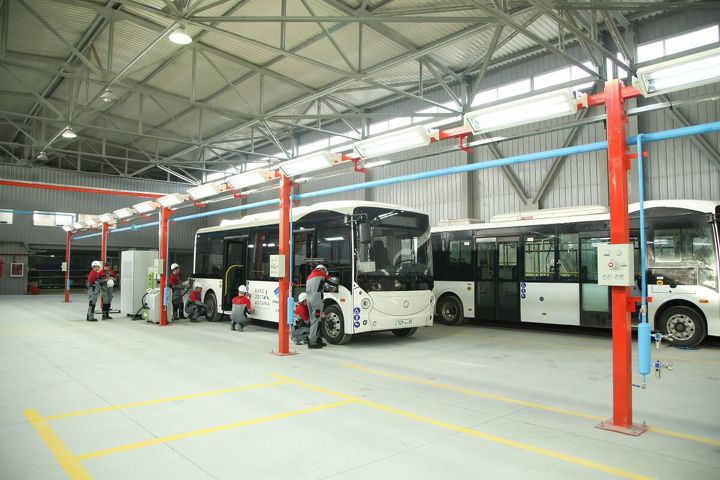 “Parasat Holding, part of a group including the Satpayev National Technical Research University and the Kazakh-British Technical University, has built an electric bus assembly plant in Almaty region. The new project was implemented in record time – just a year ago, it was still an idea. Then, the company’s management decided that an innovative production site would be a great research platform for students and faculty. The idea was to set a factory of electric buses and later create a design bureau on its basis,” Forbes Kazakhstan reported.

The company partnered last year with Higer, China’s leading electric bus manufacturer. Higer makes one of the best batteries for electric buses, which was one of the main reasons for choosing the company as partner. A titanium-ion battery provides a city bus with a power reserve of 70 kilometres (km). An average bus route in large cities does not exceed 50 km; in Almaty, the average route is 34 km. Moreover, the Higer battery operates safely at temperatures as low as -30 degrees and the charging time to start the bus takes no longer than eight minutes.

Parasat and Higer have signed two agreements, one on the joint construction of the plant in Almaty with a 51-percent stake owned by the Chinese side and the other on the transfer of technology and joint research activities. In addition, Higer has given Parasat the patent on all its models throughout the Commonwealth of Independent States (CIS), reported Forbes Kazakhstan.

The vehicles differ from the Chinese analogues in design and equipment set. The 160-kilowatt (kW) electric engine was replaced by a 15-kW Jing Jin TM5027H with liquid cooling and is designed for operating at an input voltage of 387 V. Rather than a lithium-ion battery, a lithium-titanate battery (Li4Ti5O12) was installed in the models. Front independent air suspension comes with hydraulic telescopic shock absorbers and a stabiliser bar, while the rear dependent air suspension is equipped with hydraulic telescopic shock absorbers and anti-roll. 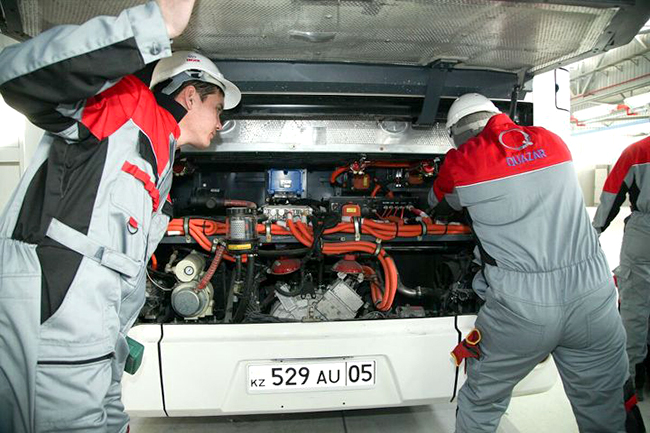 Electric buses are considerably more expensive, approximately $40,000 higher than the diesel models manufactured in Europe, according to the developers. Their operation, however, is significantly cheaper. The average daily mileage for a city bus is 300 km. At current fuel prices, running a diesel bus costs 22,000tenge (US$66) per day. Its rival will require only 3,200 tenge (US$9.60) of electricity. Constructing the necessary gas station costs nearly one billion tenge (US$3.02 million), whereas a charge station for ten electric buses will cost 16 million tenge (US$48,000), they added.

The company has indicated charging the buses will not be problematic for the city, as the electric substations currently used for trolleybuses and trams can be used. Their capacity will be adequate to simultaneously charge 500 buses.

The plant plans to initially produce nearly 300 vehicles a year. If the volume of orders increases, the company is prepared to introduce a second shift and release up to 1,000 buses per year. In the meantime, Parasat is in talks with local officials and trucking companies to introduce Quasar electric buses in the public transportation system.