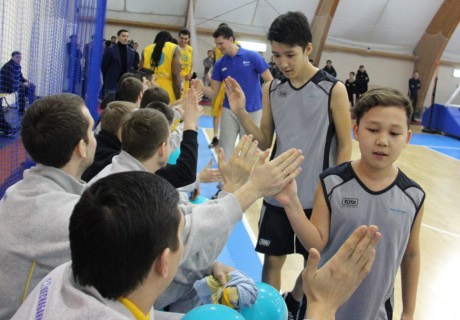 “We hope that after a certain period of time, the children who will be trained at our academy will be able to join our basketball club’s main team. People often ask why there are so many foreign players in Kazakh basketball clubs. Indeed, only through providing a proper foundation, can we train athletes who will compete for top places. This is a first step for us, and I think that we will continue. There is a plan to open academies at other entities as part of the Presidential Sports Club,” Astana Presidential Club Executive Director Amanbek Kulchikov told the media.

The academy coaches are tasked with ensuring the harmonious physical and intellectual development of children in the game, developing their leadership and teamwork skills as well as providing cultural and leisure activities. Coaches were carefully selected, and one of the key points was knowledge of the Russian language.

Serbian coach Dejan Parezanin, a graduate of BC Partizan Belgrade, which has one of Europe’s best basketball academies, was appointed the academy’s head coach. Throughout his coaching career, he has been training children and cadets in Serbia. The teams he coached played in EuroLeague tournaments.

Two young Kazakh coaches, Anton Kirin and Ismail Bimendin, were appointed assistant coaches. One of the reasons behind inviting a foreign coach was to help his Kazakh colleagues learn from his experience and develop Kazakhstan’s basketball also in terms of coaching.

During the presentation of the club, the coaches demonstrated a warm-up exercise, after which the children played with professional players of Astana’s main team.

The Astana Basketball Academy meets all international requirements, is equipped with a unique professional parquet floor with no match in Kazakhstan and supplies the gear and uniform for children.

Sixty children aged 8 to 14 currently train at the Academy. The training sessions are in the morning and evening.