ASTANA – Kazakh literary tradition has historically been rich in spoken literature expressed through a variety of genres, among them songs, proverbs, tales and epics. Aitys, one of spoken literary genres, stands out among the others as a combination of poetry, public speaking, performance art and music. 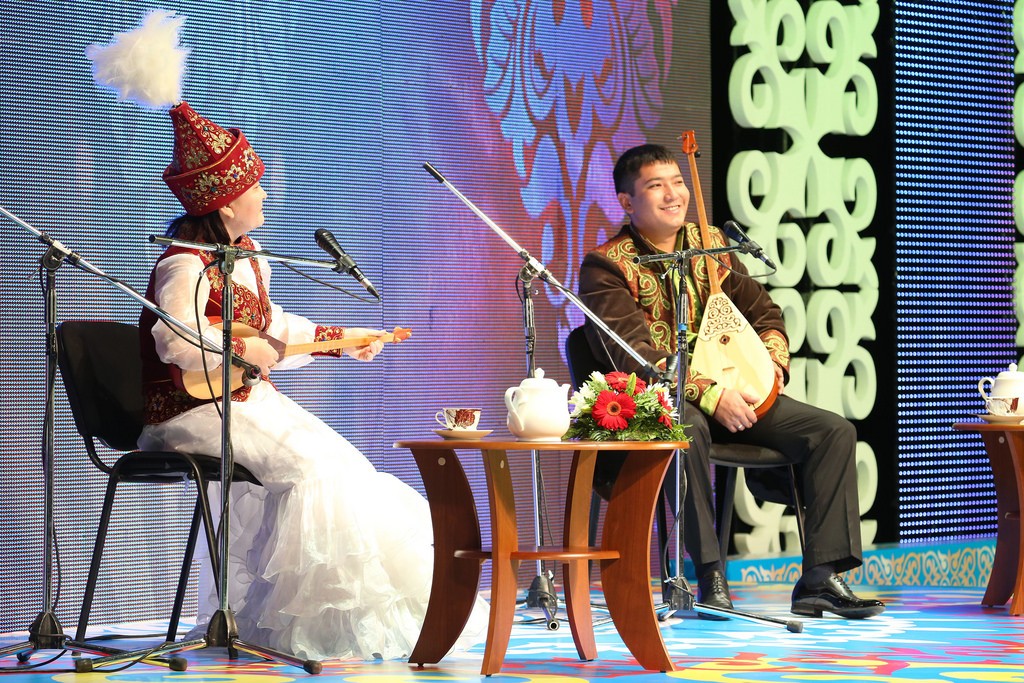 The art form is deeply social. A parallel can be drawn between aitys and modern rap, because both, stylistically, occupy a grey area between speech, poetry and singing. Aitys has risen and fallen with the evolution of Kazakh culture. Even in times of repression, the art form was maintained; now it is seeing a resurgence, and international recognition.

Aitys, a synthesis of poetry, music, drama and performing arts, is a public show of talent where two akyns (musicians, vocalists and songwriters all in one) compete in a poetic singing dispute. Akyns enter the contest without pre-written lyrics or prior preparation and take turns improvising a rhymed impromptu answer to keep the chanted conversation flowing, competing in wit, intellect, humour, ingenuity and originality. The improvised verses are most commonly sung to the accompaniment of a dombra (a long-necked two-string instrument), a kobyz (an ancient Kazakh bowed instrument) or an accordion.

The earliest mention of aitys as a folklore genre can be found in the chronicles of the 11–12th centuries. Makhmud al-Kashgari’s first comprehensive dictionary of Turkic languages, “Diwan Lughat al-Turk” (“Compendium of the Languages of the Turks”) written in 1072–74 was intended for use by the Baghdad Caliphs who were controlled by the Seljuk Turks. Al-Kashgari’s dictionary contains the features of old Turkic poetry traditions. In a chapter titled “Aitys of Summer and Winter,” the scholar wrote a rhymed dispute between the two seasons. 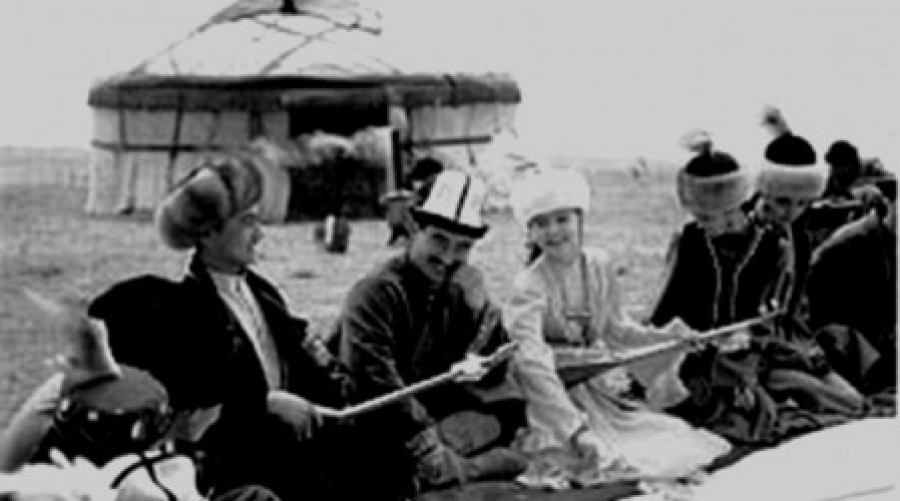 Khoja Ahmed Yassawi, a Turkic poet, scholar and early mystic who had a tremendous impact on the development of Sufi orders throughout the Turkic-speaking world in the 12th century, dedicated a chapter to the “Aitys of Hell and Heaven,” a rhymed debate of oppositions in his famous “Diwan-i Hikmet.”

Aitys developed not only as a literary and musical genre, but as an old folk tradition, the major and most anticipated entertainment at every Kazakh festivity and celebration. The rise of the tradition was seen in the 19th century, at a time when Kazakh music began to develop as an independent folk art, free from religion and ritual. This period was truly a spiritual renaissance of the nation, in which musical traditions flourished.

There were several types of aitys. Kaim-aitys and sure-aitys were most common. Kaim-aitys was a singing improvisational competition between young novice akyns. It was a communication form with an aesthetic touch that took place at friendly gatherings and evening tables. Such aitys were also often held between groups of young men and women as a form of playful courtship and singing conversation, in which the young people could express their sympathies and affection in a subtle and respectful manner.

Sure-aitys was a serious competition featuring a more dramatic delivery, complex content and lengthier structure. Only experienced masters of improvisation and oration with knowledge of history, culture, politics, inter-tribal relations and everyday life were allowed to enter these competitions. 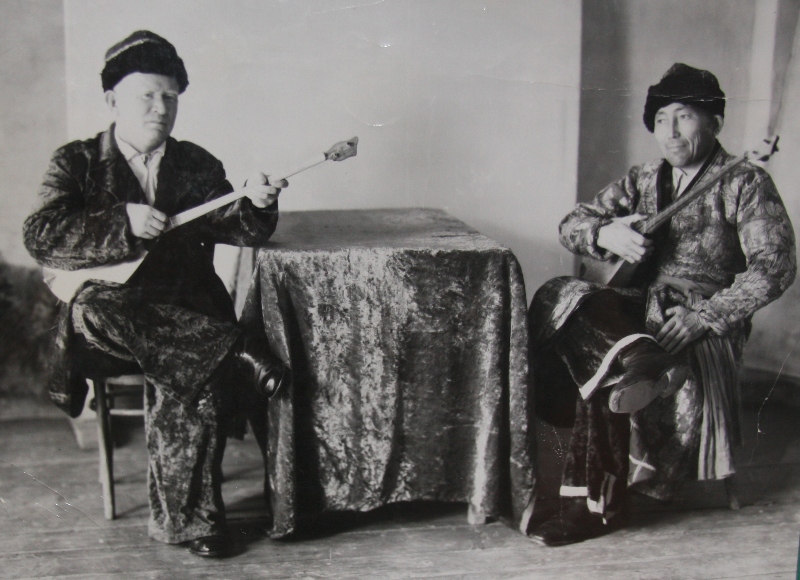 These competitions were major events, with the place and participants announced in advance so more viewers could attend. Akyns represented different regions and tribes. When they publicly debated, the spectators were naturally divided into opposing teams cheering for their representative. It was the public that judged the akyns and defined the winner.

Structurally, sure-aitys consisted of three parts. First, the akyns presented themselves and their backgrounds and praised their famous ancestors and war heroes. Next, the akyns would debate important social issues. They had to spar to the point where it became obvious that one of them had presented weightier arguments, funnier jokes, smoother rhymes and better performance overall, leaving the opponent incapable of an equally eloquent reply and flow. The rules of conduct required the losing contestant to admit defeat during the race and retreat peacefully and gracefully. After the culmination, the winning akyn ended the debate with a summary of his glory.

The winners were awarded valuable prizes. The main prize, however, was the public’s recognition of the winning akyn’s talent, wit and eloquence. Talented akyns, often viewed as sages, had colossal influence on public opinion and enjoyed immense, nationwide fame and dedication from fans.

Akyn’s performances often reflected the overall sentiments prevailing among the people. They inspired the public and channelled concerns of the common people to those in power.  Depending on the competing artists’ talent and status, the akyns covered a wide range of topics. Many of them were social philosophers attracted to Enlightenment thinking who expounded rhythmically on social injustice, women’s inequality, corruption, malpractice in governance, archaic traditions and ignorance. 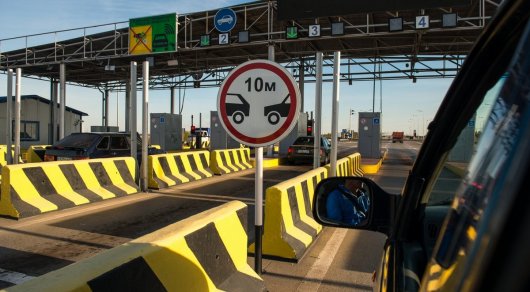 The most gifted akyns, including Orynbai, Shozhe, Suyumbai, Birzhan, Zhambyl and Aset, received national recognition for striving to break the centuries-old patterns of class division and strengthen social mobility, literacy and the pursuit of cultural exchanges.

Women akyns like Sara, Aksulu, Manat, Bolyk and Ryszhan were proponents of women empowerment, challenging the common perceptions of women’s role in the society. They advocated for girls’ education, using their leadership, fame and influence to argue for more individual liberties for women and for increasing their societal involvement and participation.

In the beginning of the 20th century, famous performances such as the aitys between Birzhan and Sara, Zhambyl and Sarybas were recorded and the lyrics were written down.

During the Soviet era, for political reasons, aitys were scaled down to a rare local occasion. The art form, however, was passed down from one generation to another and was preserved by a handful of akyn-dynasties.

The tradition was revived in the 1990s after Kazakhstan became an independent state and Kazakh was restored as a state language. Ever since, Sure-aitys has been held in large concert halls to mark holidays and important dates, gathering thousands of spectators. The competitions are often aired on national television, drawing the attention of millions. As in classical aitys, contemporary akyns raise important social issues, examine government officials’ work, join in the rhetoric and conversation on sensitive matters and chronicle the on-going changes in the country.

The United Nations Educational, Scientific and Cultural Organisation (UNESCO) added aitys to its Representative List of Intangible Cultural Heritage of Humanity on Dec. 2, 2015.