Prospects for Regional Cooperation in Central Asia Have Not Been Stronger in Long Time, Scholar Says

ASTANA – Dr. Frederick Starr, founder and chairman of the Central Asia-Caucusus Institute and research professor at John Hopkins University, came to the capital to participate in the conference dedicated to the 25th anniversary of Kazakh independence and present his newest report “Kazakhstan 2041: the Next Twenty-Five Years,” written together with Johan Engvall and Svante Cornell. The Astana Times had an exclusive opportunity to interview him. 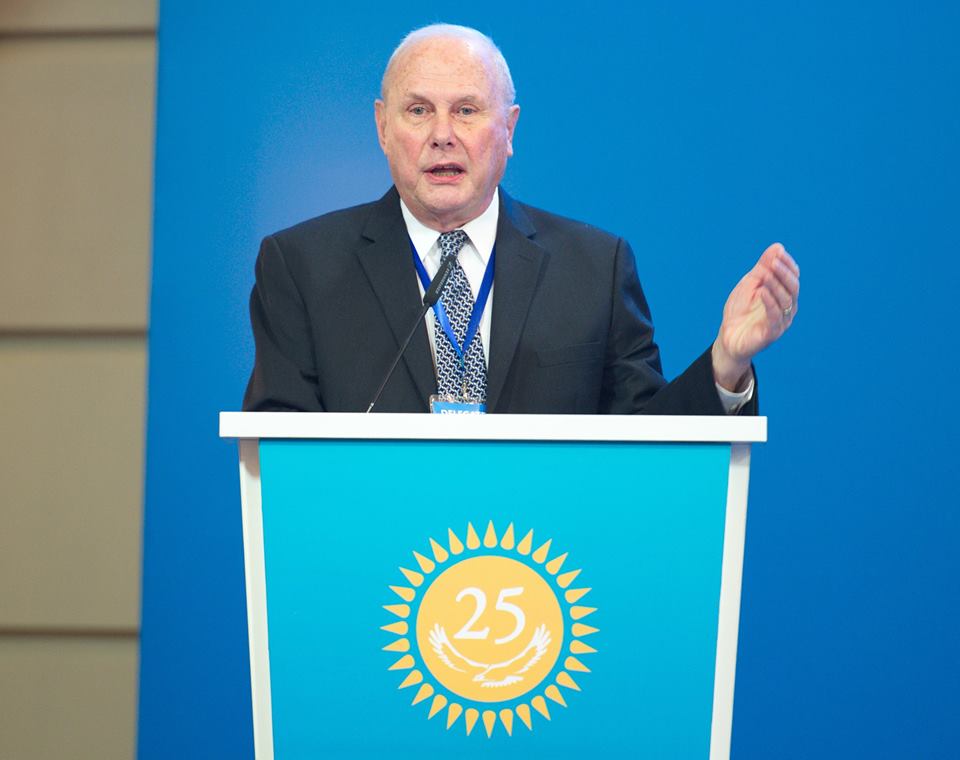 Dr. Starr, in the Kazakhstan 2041 report you produced with the Swedish scholars you list several challenges the nation will likely be facing over the next 25 years and provide your recommendations. If you had to choose the top three such challenges, what would they be?

Well, first of all, the government is well aware of the need to continue economic reforms and diversification. Many correct steps are being taken now and we certainly respectfully applaud them. However, we do wonder if there shouldn’t be much more emphasis on agriculture. We feel that Kazakhstan, in addition to its other functions, could become the “bread basket” for Eurasia, but it means dramatic modernisation of the agricultural sector.

It is hard to reduce the list to a short one, but certainly it would contain the demographic challenge. The population of Kazakhstan back in the 1960s-1980s grew very fast and then, because of the improved medical care and health, people generally started living longer and the population now is beginning to age. This is a sign of a mature society. However, it has a negative side – there will be fewer people 20 years from now to do the work and support the retired population. That means that Kazakhstan must become more efficient; that means diversifying the economy and modernising sectors. That, I would say, is one significant challenge.

The third major challenge of the next 25 years will be for all governmental institutions to become as effective as possible. The phrase we use in our report is “good governance.” It means if you are applying for a driver’s license or a passport, or you have to sort out your taxes or any contact you have with the government should be efficient, respectful and honest. This is a huge opportunity for Kazakhstan to improve and, by the way, this is an area which every government on the planet must face. Kazakhstan can expect real collaboration and help not only from other countries in general, but specifically from the United States in doing this.

You have been well known for decades as a great scholar on Central Asia. It would be interesting to hear your views regarding the first 25 years of independence of not only Kazakhstan, but also of its regional neighbours. In a nutshell, how would you characterise the development so far of Uzbekistan, Kyrgyzstan, Tajikistan and Turkmenistan and how do you see the development of the region as a whole for the next 25 years?

There was a very intelligent report published as a book called “Central Asia 2050” created by a group of former World Bank economists. I wrote an introduction chapter on the history. Their conclusion was very interesting. It stated that by 2050, all the countries of Central Asia can reach solid middle-class status. However, there are things that must be done in order to achieve that in ways of economic reform, increasing the efficiency at all levels in a way of governmental reform, reduction of bureaucracy, addressing issues of corruption and so forth.

As of today, the situation in those countries is unequal. Kazakhstan is obviously leading. Uzbekistan is really doing quite well, especially during the current phase of low energy prices. Turkmenistan with its tremendous resources is doing quite well, although they are suffering from a current crisis. There are two countries facing difficulties – Kyrgyzstan and Tajikistan. But let me stress both of them have prospects, especially with the CASA-1000 project. This is a new source of income for them by selling electricity to Pakistan, Afghanistan and even potentially India. But in both cases they have to become much more effective in their governance. There are problems of corruption, serious problems in both countries that their governments are well aware of. They have to address these issues if they want to “ring the bell.”

It seems to me prospects for the regional collaboration haven’t been stronger in 15 years. The question is, will these countries see this opportunity and form an organisation that enables them to communicate with each other easily and regularly on important issues or not? I have to emphasise that regional cooperation within Central Asia is not against anyone. It is not against China, Russia, America, Europe, Turkey or India. It is for Central Asia. I think that principle should be clear to everyone and they must be very firm. Everyone should respect their right to do this and keep their hands off. This is the view President Nazarbayev has put forward repeatedly. He pointed out that Central Asia has a common identity, even though it is ethnically diverse and has different cultural heritages. They share values and history and on this basis they have every right to meet together without any outsiders.

Are you optimistic about the potential for successful stabilisation in Afghanistan? How strong is the Taliban? What is the possible future for that country?

At the moment, Afghanistan is experiencing very difficult times. There are more than 30 terrorist organisations operating on their territory and only two-three are Afghans. They come from the Middle East, Pakistan and Central Asia. So, this is not uniquely an Afghan problem; it is a world problem and the world must accept responsibility. I do not consider it responsible that the United States and NATO have drawn down their troop levels so quickly. We did not do this in Japan, Germany or Korea and look at the success of their economies today. Unfortunately, we have been impatient and not tenacious and steady in Afghanistan. I hope that with the new U.S. administration we will rethink this policy.

In Central Asia, there is a tendency to see only a bad side of Afghanistan. What that fails to recognise is that the Taliban has never controlled any of the major cities and economic centres of Afghanistan. It controls a lot of territory in the empty country side, especially in the south. The country’s National Army has managed to protect urban centres without outside support or with very little.

Furthermore, people in Central Asia significantly undervalue the amount of economic activity taking place there, including major investments. There is a lot going on that is not reported here because of the one-sided public information. Frankly, the situation is underreported in the West, too. For example, the TAPI pipeline initiative is moving forward very steadily. I think that it is beneficial for people in Central Asia to stop viewing Afghanistan as a glass half-empty and view it as a glass half-full and getting even fuller. Let me also say that Afghanistan is going to move forward with its transport projects. President Ghani has a serious strategy in that area.

With the new U.S. administration preparing to take office, what are your expectations of its policies in the region? Will the region fade further in importance for Washington or will it fall sideways in a grand-scheme-of-things arrangement with Russia?

This is a question that no one can answer. There is so much speculation and I have nothing original to say on this subject. However, I do believe and I have said it from the beginning of the campaign that either of the major alternatives – either Mr. Trump or Mrs. Clinton – would end up engaging more actively in Central Asia than did Mr. Obama. I think Mr. Trump is a very practical man and he will understand the situation in Afghanistan and I think he will also appreciate that the United States has a role to play in a balanced foreign policy. As the American economy revives, I think that it will improve prospects for investment, too. I would say I am cautiously optimistic about the future.

Also, I think that C5+1 is a good initiative. I think Central Asian countries themselves should be very active and develop the agenda and also they should be very blunt and tell Washington what they seek.