By Aigerim Seisembayeva in Nation on 16 December 2016

ASTANA – President Nursultan Nazarbayev congratulated the people of Kazakhstan Dec. 15 during a ceremonial meeting on the national holiday marking the nation’s 25th anniversary of independence.

“Dear compatriots! Let me congratulate you with the great holiday and achievement of our country, the 25th anniversary of independence! On December 16, 1991, we declared our independence. We installed our turquoise national flag inside the United Nations building, our national anthem became known around the world and we made our national emblem an eternal stamp,” he said. 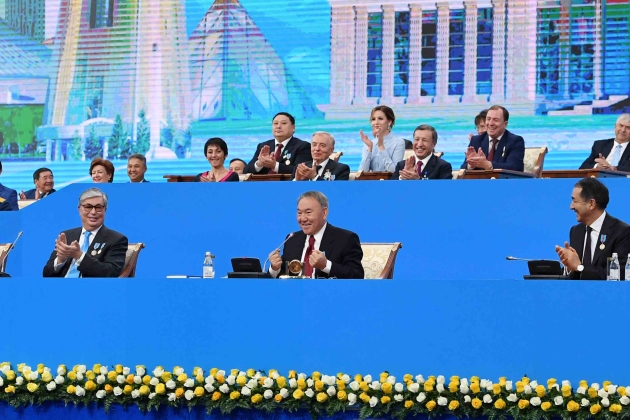 The President noted during the first years of independence Kazakhstan adopted its Constitution, established its armed forces and marked its borders. He also stressed the idea of the Mangilik Yel (Eternal Nation), which originated 1,500 years ago, has now become a national idea.

“Twenty-five years of independence is an unprecedented feat of our generation. It is symbolic that in the year of its anniversary, Kazakhstan was elected as a non-permanent member of the UN Security Council. We are starting our 25th year of independence in a new role. I congratulate all of you with this new responsible mission. The declaration of the 25th anniversary of independence adopted by the Parliament became an important political and legal document that reflects our great achievements and victories,” said Nazarbayev.

“Today, Kazakhstan is a successful, prosperous state and we are known throughout the world. And in 1991, we were in a desperate situation. We faced a tough dilemma: to be or not to be,” he added.

As Kazakhstan embarked on its independent journey, the country was plunged into “wild capitalism,” said the President. The collapse of the command economic system left millions of people destitute. Various experts and politicians forecast dissolution or civil war. The country’s population fell from 17.5 million to 14.9 million.

“The world wasn’t interested in us, it simply didn’t need us. Today, it is hard to imagine that it was only 25 years ago, but it was the reality,” he said.

The head of state focused on the most important achievements of the last 25 years.

“Our country, according to leading international experts, gave the world a vivid example of Kazakhstan’s ‘economic miracle,’” he said.

He drew attention to the progressive development of the society.

“We have created a unique model of peace and harmony. Born from the public will, the Assembly of the People of Kazakhstan has gathered all ethnic groups. Most importantly, we are creating a just society in which everyone can say: ‘I am a citizen of Kazakhstan; this is my country, I am building my happiness here,’” said Nazarbayev.

Among the key successes, the President noted the establishment of the new capital, Astana, which became one of the fastest growing mega-cities.

The head of state emphasised economic success provided real growth of public welfare. As part of the social programmes, he instructed the government to increase pensions by 20 percent in 2017 compared to 2016, as well as ensure a 20-percent increase in the size of a lump sum state allowance due to childbirth starting July 1.

Nazarbayev also praised the work of Kazakh business people, noting they became prosperous without the help of initial capital. As a result, Kazakhstan is now even more confident of its abilities, he added.

“Our successful business people didn’t have millionaire fathers; they had to make it on their own. I have always said that reforms were boosted by restless people, hard workers who created their future and that of their country with their work,” he said.

The nation has about 1.2 million business organisations which account for a quarter of the national wealth. By 2050, Nazarbayev projected Kazakh small and medium-sized enterprises (SMEs) will account for up to 50 percent, and research and development spending will rise to 3 percent, of the national GDP. Energy consumption will decrease two-fold, all of which will bring Kazakhstan to the level of countries with knowledge-based economies.

The head of state stressed all citizens, regardless of place of residence, sex, age or social status, will be able to receive high-quality education and health care.

“Kazakhstan will enter the top 30 countries with the highest ratings of school education. Our key universities will be among hundreds of leading universities of the world. The reforms being conducted and public welfare will increase life expectancy of Kazakhstanis up to 82 years,” he said.

“A new stage of development of Kazakhstan raises the question of increasing the accountability of the Parliament and the government regarding the state of affairs in the country,” he said.

The President added Kazakhstan has been and will be a state with a presidential form of government, but it is time to consider the redistribution of powers among the presidency, government and Parliament. He announced a special commission will be established to look into the issue.

“The special commission should examine these questions and make proposals to amend the relevant laws and possibly the Constitution,” he added.

The global crisis, which began seven years ago, has grown into a hyper-crisis, he said. Nazarbayev predicted all spheres of human activity will radically change in the next 15-20 years.

“Artificial intelligence, unmanned vehicles, 3D printing and genetic and bioengineering will completely change construction, industry, transportation, agriculture, services and medicine and our very understanding of professions and opportunities,” he said.

“All countries of the world will gradually shift to renewable energy sources. Today, a new type of global economy is emerging and at the same time new principles of international relations are being established. The social order that has been ruling for the last two-three decades is being replaced by completely new formats and models of development,” he added.

The President paid special attention to the country’s success in the international arena, including Eurasian economic integration initiatives, leadership in the global anti-nuclear movement and contribution to peace-making efforts.

“I am convinced that time will pass and even after a thousand years, the work of our generation, which selflessly created a new country, will inspire and help our descendants continue to carry our country forward,” he said.