HAMBURG – Minister of Foreign Affairs of Kazakhstan Erlan Idrissov participated in the Organisation for Security and Cooperation in Europe (OSCE) annual Council of Foreign Ministers, the C5+1 meeting of foreign ministers of Central Asian countries and the United States and the Collective Security Treaty Organisation (CSTO) ministerial meeting during a Dec. 7-9 visit to Germany. 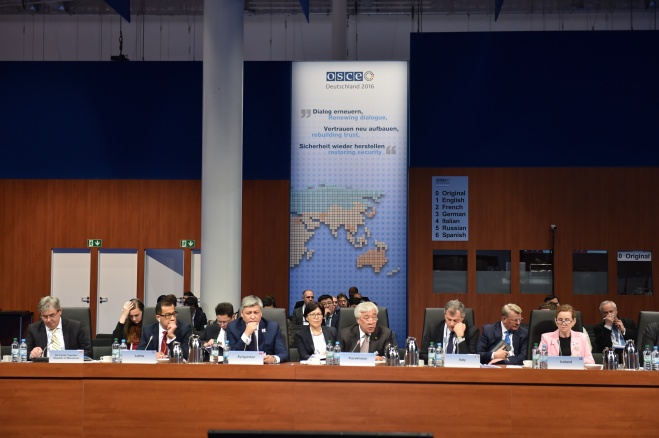 Addressing the plenary session of the OSCE ministerial council, Idrissov said rebuilding confidence and trust in Europe and Eurasia was very important. In fact, the Eurasian dimension of the OSCE space, according to Idrissov, is the core message of the Astana Declaration and should remain an OSCE focus. Eurasia is fully able to “pilot win-win scenarios, and doom zero-sum games to history,” he said.

Idrissov called on his counterparts to strengthen the OSCE, saying that Kazakhstan fully supports the enhancement of the organisation, its legal status, and its institutions.

“The [OSCE] should work with the governments of participating states, not on them, in terms of promoting the principles of good governance, including strengthening the rule of law, institution building and nurturing a new political culture. And this is the work of several generations,” he further said.

In addition to growing and gaining support, the OSCE must evolve to face modern conflicts and confrontations and become an organisation prepared to meet the challenges of the 21st century, not the last century. In doing so, it has to reinforce the multifaceted and enduring principles on which it was founded. That is what is necessary for the European security system, Idrissov said.

In his opening speech, Frank-Walter Steinmeier, OSCE chairperson-in-office and German foreign minister, emphasised that in stormy times a strong OSCE is more important than ever, to provide an effective framework and engine for dialogue and cooperation.

“It seems that crisis mode has become the new normal in these times of upheaval,” said Steinmeier, referring to the key objectives of the German chairmanship of the organisation. “By renewing dialogue we wish to contribute to rebuilding trust that has been lost. This is indispensable to restoring security in the OSCE area, from Vancouver to Vladivostok.”

Looking at the crisis in and around Ukraine, Steinmeier reminded the sides that the implementation of the Minsk agreements required real political will. He commended the work of the OSCE Special Monitoring Mission in Ukraine (SMM) and called protracted obstructions, threats and attacks against the monitors unacceptable.

Idrissov also stressed the crucial role of the OSCE in the Ukrainian crisis resolution. “At the outset, it was unthinkable that the OSCE would play the mediator role between Russia and Ukraine. This shows how our principles have endured, even while our methods and position in the world have evolved,” he stated.

As for the recent elections in the United States and Austria as well as referenda in Great Britain and Italy, Kazakhstan considers them expressions of popular will, Idrissov said. The Kazakh side supposes that the results of these votes as well as of future elections in France and Germany next year should be viewed as opening opportunities for dialogue and understanding within and between countries.

Kazakhstan also welcomes the results of the presidential election in Uzbekistan. As Idrissov put it, Kazakhstan “respects the choice of the people of a brotherly nation and will steadfastly support efforts aimed at strengthening the internal stability, further economic development and political evolution of Uzbekistan. New opportunities are emerging for mutually beneficial cooperation between Kazakhstan and Uzbekistan, and for the expansion of cooperation of all countries of Central Asia,” he said.

On economic issues, Idrissov noted that there is major potential to develop trade and economic cooperation between the Eurasian Economic Union (EAEU) and the EU – something especially important in light in difficult economic times.

Opening the C5+1 meeting, US Secretary of State John Kerry congratulated his colleagues on the 25th anniversary of their independence celebrated this year and emphasised the importance attached by the US to cooperation with the region. He particularly noted his openness to constructive cooperation with all partners in the region and stressed the US’s commitment to the concept of multilateral partnership.

In turn, Idrissov emphasised Astana’s commitment to strengthening comprehensive regional cooperation in Central Asia and noted that it would be one of the priorities of Kazakhstan’s work on the UN Security Council in 2017-2018. He also pointed out the relevance of strengthening the C5+1 platform and its synergy with similar cooperation formats, in particular with the European Union, Japan and South Korea.

The meeting also discussed the implementation of joint projects in security, the fight against terrorism, trade, transportation, economy and energy, as well as the further development of the dialogue platform. When discussing the C5+1 expansion prospects, the meeting participants agreed on the special relevance of water and energy issues for the region. The US confirmed its willingness to provide technical and expert assistance to Central Asian countries in this area.

The foreign ministers expressed satisfaction with the dialogue platform’s pace of development, noting that four meetings at the ministerial level have been held since the launch of the C5+1 in November 2015. Kerry commented positively on the platform’s development prospects and emphasised his intention to work with the new US administration on consolidating the results and continuing the work of the C5+1 format.

At the CSTO meeting, the foreign ministers of Armenia, Belarus, Kazakhstan, Kyrgyzstan, Russia and Tajikistan approved the Joint Statement “On increasing the effectiveness of the OSCE in the European security system.”

The document expresses deep concern at the continuing crisis of the European security system, which is now aggravated by the growing threat posed by international terrorism and organised crime, the migration crisis and the danger of escalating tensions in the world and in the OSCE area.

According to the foreign ministers of the CSTO member states, the answers to these challenges must be sought together, through dialogue and trust, for the situation in the world confirms the relevance of the task of building a community of equal and indivisible security set at the OSCE Summit in Astana in 2010.

The statement stresses the need for cooperation between regional organisations, in particular between the OSCE and the CSTO in order to build confidence and jointly cope with common threats and challenges to security and stability in Eurasia.

Meeting participants also discussed the preparation process for the next CSTO Collective Security Council summit scheduled for Dec. 26 in St. Petersburg. In particular, the priorities of the Belarusian chairmanship of the CSTO will be presented to the heads of member states at the upcoming session.

Idrissov also took part in the “Relevance of arms control for modern European security” event, which discussed Steinmeier’s initiative on resuming dialogue on arms control in the OSCE area.

In addition, the Kazakh foreign minister held his traditional meeting with OSCE Secretary General Lamberto Zannier and invited him to take part in the OSCE Economic and Environmental Conference in Astana timed to coincide with EXPO 2017.

At a meeting with Director of the Office for Democratic Institutions and Human Rights Michael Link, the sides discussed the importance of combating hate and Islamophobic crimes, as well as other types of ethnic and religious intolerance.

On the margins of the Ministerial Council, Idrissov held meetings with the heads of delegations from Afghanistan, Andorra, Armenia, Austria, Azerbaijan, Belgium, Britain, France, Georgia, Germany, Italy, Hungary, Mongolia, Portugal, Russia, Spain, and the U.S. These meetings raised issues of international policy and bilateral cooperation, participation of foreign businesses and governments in the EXPO 2017 in Astana, and Kazakhstan’s programme of work in the UN Security Council beginning Jan. 1.

Together with International Peace Bureau co-President Reiner Braun, Idrissov examined the ways of implementing the Kazakh President’s proposal to allocate one percent of all states’ military budgets for sustainable development goals.