By Anuar Abdrakhmanov in Sports on 7 November 2016

ASTANA – Oct. 29 saw the finish of the 25th season of the Kazakhstan Football championship’s Premier League. For the third time in a row, FC Astana, a participant of the UEFA Champions League last season and the Europa League this year, won the tournament. 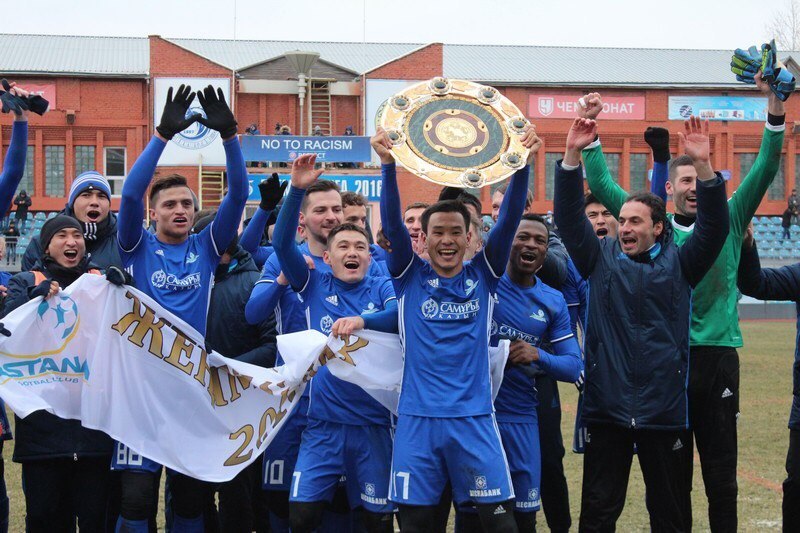 On Oct. 26, FC Astana tied 0:0 with Okzhetpes Kokshetau and with one game to spare claimed the title. As in the league’s previous edition, Kairat Almaty won silver medals.

“My players are heroes to me. I congratulate the club and the fans with this victory. I think that a lot of work has been done. Now we will throw all our efforts into [playing decently in] the Europa League that would help us improve our position in the UEFA ranking. This is important, because next year we will play again in the Champions League qualification and would prefer to be seeded in the draw. In two and a half years, we have played 32 matches in the European competition, this is an incredible result for us,” commented FC Astana’s Head Coach Stanimir Stoilov.

Kairat are runners-up for the second year in a row. Almaty’s favourite club defeated FC Astana twice in face-to-face competition and did not lose a home game throughout the season. Nevertheless, as opposed to their main rivals, Kairat lacked stability, which resulted in it losing many unnecessary points in away matches and missing once again in the race for the title.

“I think that we lost our chances to claim the title long ago. Already in summer it was clear that it would be very difficult for us to win. In general, we showed good football, we scored a lot. But in some matches our defence display was not the way that is expected from champions,” commented Kairat’s midfielder Andrey Arshavin, known internationally for his past performances in FC Arsenal and the national team of Russia.

The final round of the championship left only one question unanswered. That was who would win third place and thus the right to join Kairat in representing the country in the Europa League qualification next year. The privilege went to Irtysh Pavlodar. In the last match, they hosted FC Astana, who arrived as new champions and fielded a number of players from the reserve squad. The match ended in a goalless draw, which was enough for Irtysh to secure the bronze medals and avoid being overtaken in the table by their nearest rivals – Ordabasy Shymkent who ultimately came in fourth.

“Today, was a very important game for us. I congratulate the guys with a [decent] way they played throughout the season. I congratulate the club and especially the fans that, regardless of any issues, provided so much support to the team. We had serious problems this season, and still we won bronze. Based on the quality of football that our team displayed, our third place was well-deserved,” said Irtysh’s manager Dimitar Dimitrov.

In the last round’s other matches, Kairat crushed Okzhetpes Kokshetau 5:0, which ended up fifth while Ordabasy Shymkent won 2:1 against Aktobe, who finished sixth.

In the bottom half of the table, Zhetysu Taldyqorghan finished last, 12th, and are therefore relegated to the First Division. Kaisar Kyzylorda, winners of the season in the first division, will replace them, returning after a one-year break. FC Taraz were the penultimate in the top-flight and will now engage in a play-off game with FC Altai from Semei, the northeastern town that is known to be the birthplace of Kazakhstan football in 1913.

With 22 goals on his account, Kairat’s Ivorian striker Gerard Gohou won the race for the Premier League’s best scorer.