ASTANA – Ahead of the Nov.  11 match in Copenhagen, the Kazakh national team’s managers knew they couldn’t count on help from a number of their key players. Tanat Nuserbayev, Azat Nurgaliev, Tagybergen Askhat, and Abzal Beisebekov were unavailable due to injuries while Islambek Kuat was suspended through two yellow cards accumulated in previous games.

In addition, with Kazakhstan’s football season nearly complete at the point, many players’ physical conditions were hardly perfect. 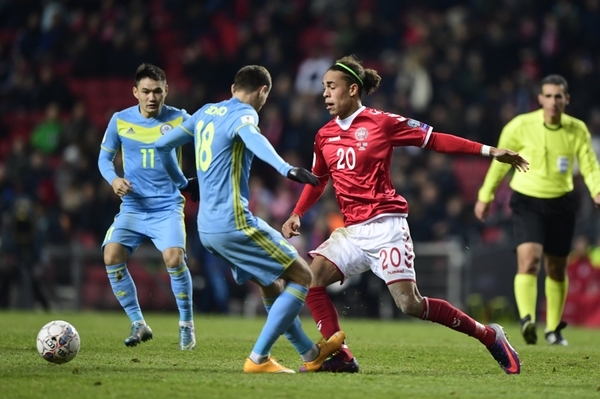 The match’s early part turned out quite eventful. Eight minutes into the game, defender Yeldos Akhmetov received a yellow card for a bad foul. Moments later, the hosts had the opportunity to pen score but Nicolai Jørgensen’s strike from a head-to-head encounter went past both Stas Pokatilov and the net behind him.

In one of the following attacks, the Danes took the lead. In the 15th minute, striker Andreas Cornelius sneaked behind Kazakhstan’s central defenders and connected with a cross from the flank, heading the ball right into the net making the score 1:0.

However, the Kazakhs did not take long to respond. Defender Gafurzhan Suyumbayev’s excellent strike from a distance equalised for the visitors 1:1.

For a time, Kazakhstan found confidence in the game and was creating some more threats to the Danish goalkeeper. Bauyrzhan Islamkhan, among others, had another effort from a distance but it ended up above the bar.

Soon, however, the Danes were back in the lead. Following a corner kick, Yeldos Akhmetov fouled on Thomas Delaney in the box so the referee designated a penalty kick, which was converted by Christian Eriksen 2:1.

In the second half, Denmark enjoyed much more control and created more dangerous moments. Pokatilov had to correct a number of mistakes from his team mates. However, the increasing intensity of the Danish attacks implied their third goal was coming. It happened in the 78th minute when defender Peter Ankersen used his chance 3:1. The outcome was finalised when Eriksen scored his second of the match, and Denmark beat Kazakhstan 4:1.

“The Danes allowed us to play tonight. We lacked a forward at the front, which was evident even to a naked eye. Our hurriedness and the hosts’ superiority in individual skills led to too many moments in front of our goals, also on our fault,” team Kazakhstan’s Manager Talgat Baisufinov said.

“We are glad that we won while showing a good display in the game. On the first glance, one might think that this victory was not so important to us [but that is a wrong assumption]. We needed a win tonight. Throughout the match we created threatening situations and scored four. Such things always add confidence,” Denmark’s and Tottenham Hotspurs midfielder Christian Eriksen commented.