ASTANA – “Travel Book. Kazakhstan,” a unique art project containing 700 of the most interesting facts about the country, was presented as a joint project Sept. 8 by the Foundation of the First President of Kazakhstan – the Leader of the Nation and Green Penguin Agency. Mass sales of the first book about Kazakhstan published in edutainment format will start this month. 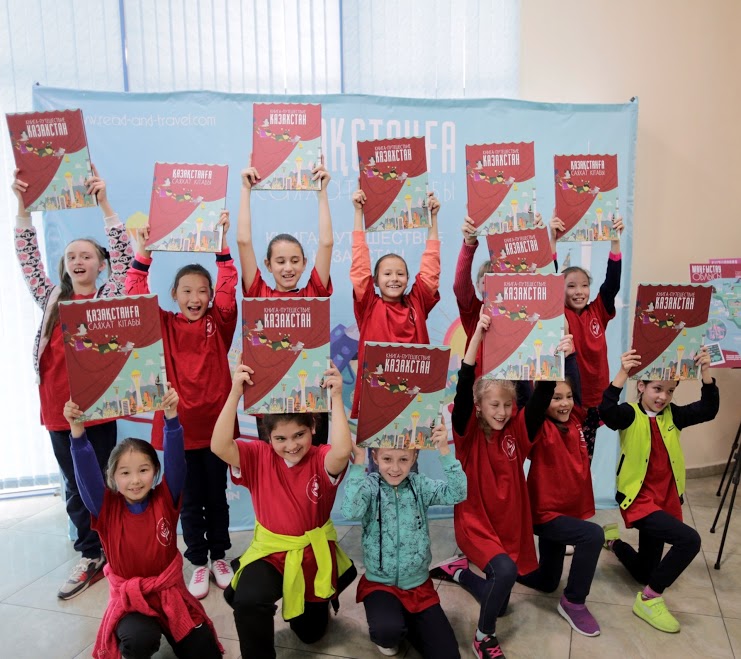 “For us it is a specially loved project – a joint project of the Foundation of the First President of Kazakhstan – the Leader of the Nation and our creative agency. ‘Travel Book. Kazakhstan’ is a motivating map-story in which we have placed 700 of the most interesting facts about the great figures of the past and heroes of modern Kazakhstan, the ancient legends and today’s achievements, the unique architectural and natural sites, and all of them are about Kazakhstan,” said co-author Yuliya Kurova.

The main feature of the book is its edutainment format, allowing learning through play.

“Edutainment is very popular abroad and the travel book was the first book about Kazakhstan in this format. This means that it does not look like a boring guide, textbook or atlas. We have tried to present the facts in a very lightweight, entertaining and infographic format with bright author illustrations,” she added. 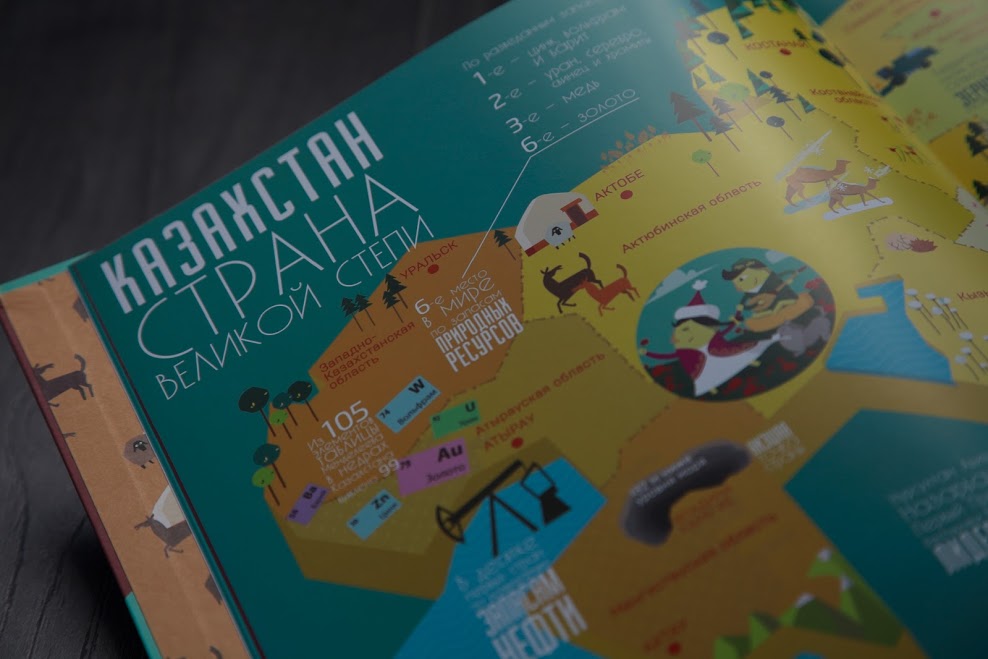 The price of the book on read-and-travel.com will be 6,000 tenge (US$17.94) and sales will begin this month. The price in shops will differ depending on their policy, noted the authors.

“The book was the first product in the framework of the project conceived by us. Its main feature is that it has a great potential. We started it with books; we will look at the reaction of readers and hope that all of our many ideas will be embodied. We really want it,” added Kurova.

The agency and Foundation of the First President initially planned the book as an encyclopaedia for children, but it appeared to be very interesting for adults as well.

“At the presentation and after a lot of people were coming up to us with words of gratitude, saying that our project is important and interesting, that they want to tell about the book to their children, friends and relatives. We came up with a great marketing content about the country, the business card of Kazakhstan, as we have planned it,” said Kurova. 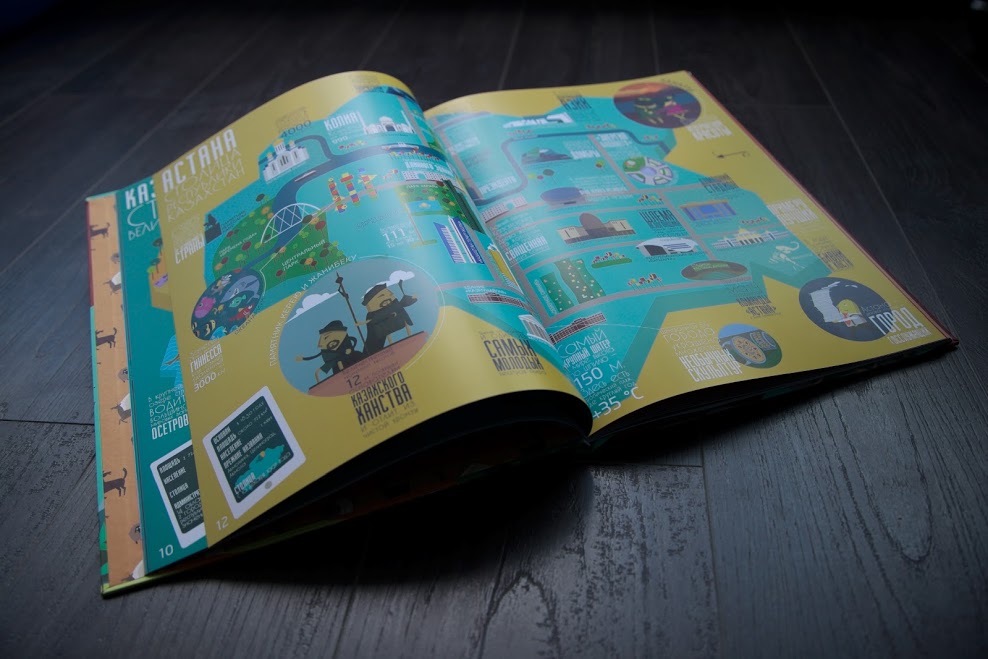 The first copies of the book were handled that day to young readers.

“There were a lot of children from the regions and they became the first lucky owners of the book. They were the first ‘social’ copies of the book, which we have intentionally released before the launch of sales,” she added.

The authors had the idea to create a product about Kazakhstan which would be interesting for everyone.

“When we came to the Foundation of the First President of Kazakhstan, our idea was supported and we decided to work together. The foundation and our agency are the authors and partners in this project,” said Kurova. “Now it is more a branding project [rather than commercial]. We see it as a kind of business card of Kazakhstan.” 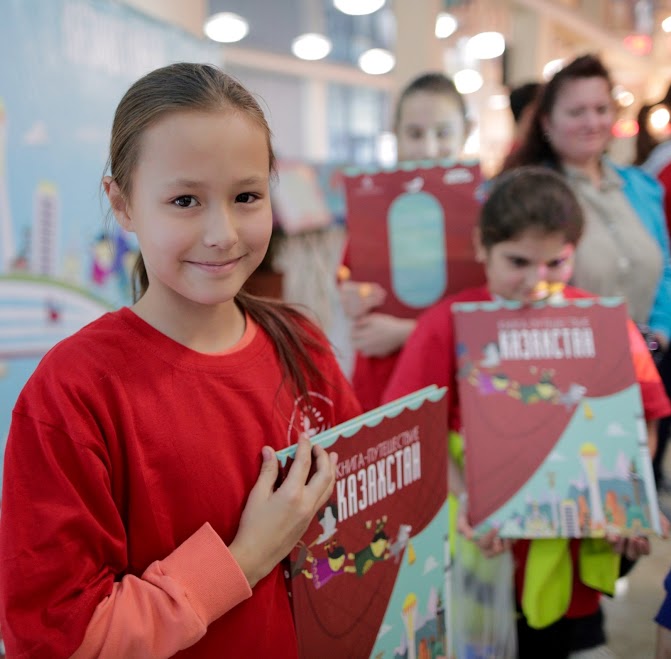 The authors feel the book would be interesting both for Kazakh residents and foreign guests of the country.

“Because as soon as we announced the release of the book, we received tonnes of questions about when the English version will be released. People want to present a book to their friends, colleagues and relatives living in foreign countries,” said Kurova.

The Kazakh and Russian versions will be in stores and online this month, while the English version will be available at the end of the year or the beginning of 2017.

The concept of the travel book came from the atlas, said co-author Irina Taranenko.

“We all remember our first atlas and that unusual magic of looking at it and studying. And we thought, why not create such an atlas of Kazakhstan for the people of the country? After all, in fact, many Kazakh people travel little and do not know their own country,” she said.

The team started thinking about what the new atlas would be like.

“First, we decided to draw objects, which turned into a collection of various historical sites with the usual and typical formulations. Then we realised that we wanted to give the text the author’s unusual component, meaning that even working with a very well-known, scientific fact, we tried to find something new and unusual in it or we tried to describe it in a very romantic language. While working on the book, we paid a huge amount of time to copywriting,” said Taranenko. 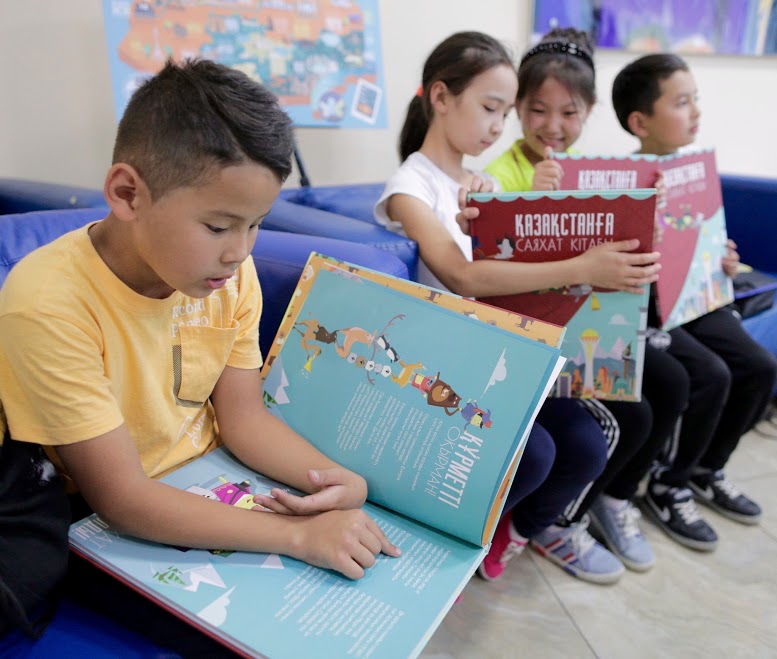 Within the process the team came to the decision the book needed main characters, noting their introduction made the work more interesting and gave it appeal and mood. As a result, Assel, Darkhan and their wolfling appeared.

The books were tested in focus groups where children expressed their reactions and feelings about the project.

“We watched how they perceive the information, on what things they pay attention first. And it was interesting to find out that the children were immediately looking at images; they really liked the characters with animals! And if they saw familiar terrain, they were immediately saying ‘I was here’ or ‘Mom, we were here.’ That fact really pleased us, because it was the exact reaction we wanted – the involvement and interest. We want to ensure that those objects were interesting for children and they could recognise them and to visit unfamiliar ones,” said Taranenko.

“The process of creating the book is very interesting, but very long: it is a lot of hours of illustrating work and writing and it took almost half a year to find interesting information and its verification. We lived with this project, we were going to sleep with thoughts about it and we had dreams about it. We were constantly finding out interesting new facts and when in doubt phoned friends who live in different cities of Kazakhstan, searched for experts in the field and reconciled with them, in general, we had a thorough approach in gathering information,” she added. 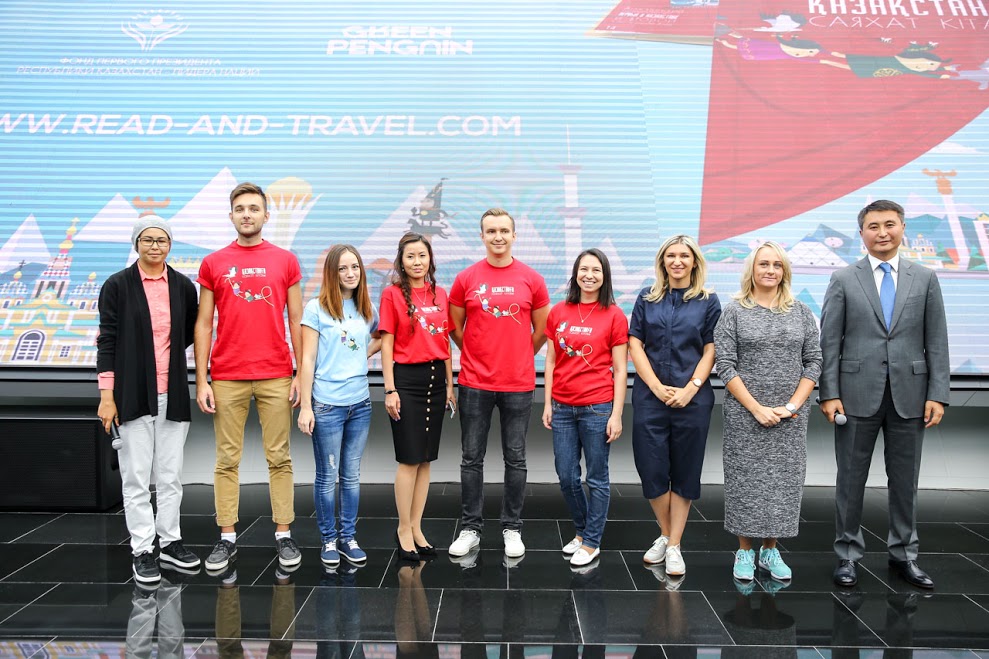 The main challenge was the search and collection of the information and later its filtration, according to the authors.

“Of course, you realise that Kazakhstan is not only 700 facts, it is much more. Therefore, we faced the necessity of filtering. We also needed to understand which parameters we should use to do that. Then it was decided to establish a balance, which means that the amount of natural and historical monuments, animals and famous personalities should always be in a certain proportion. We have tried to adhere to this rule throughout the book,” said Taranenko.

Another issue was the placement of the objects on the maps, since the book has not only infographics and text, but painted objects and characters. Everything needed to be as readable and recognisable as possible. The work took several months and one of the solutions was to use natural water bodies, roads and railroads as separating objects for reading.

The authors added the layout and copywriting took great effort.

Despite many days of hard work and sleepless nights, they said that the whole process was “positive, inspirational, kind, a project… of happiness.”

For future plans, the team says the upcoming feedback is really important.

“As for plans for the future, for us it is very important to understand what ‘Travel Book. Kazakhstan’ will become for Kazakh citizens,” said Kurova.