By Kamila Zhumabayeva in Tourism on 25 October 2016

ASTANA – A Malaysian road expedition team from the Malaysian state of Pahang visited the capital Oct. 17-19 as part of “Visit Pahang 2017” campaign that aims to promote Pahang to international tourists.

“Our main intention is to attract international tourists, especially Kazakhstan people to come and visit Pahang next year,” expedition leader and Chairman of Pahang State Tourism and Culture Committee Dato’ Sri Sharkar Shamsudin said during a tourism seminar organised in the capital Oct. 18, the Malaysian Embassy in Astana noted in their press release.

The expedition crew consists of 69 members traveling in 17 4X4 vehicles. “The team entered Kazakhstan via Khorgos Oct. 14 and will depart from the country via Uralsk on Oct. 22,” the press release stated.

Malaysian Ambassador to Kazakhstan Dato’ Hidayat Abdul Hamid expressed his hopes for the expedition to promote friendship and relations between Malaysia and Kazakhstan.

“While the Pahang expedition promotes the ‘Visit Pahang 2017’ campaign, they are also disseminating information on the places they visit in Kazakhstan to fellow Malaysians back home,” the message read.

According to the statement, this will encourage Malaysians to visit Kazakhstan when Astana hosts EXPO 2017 exhibition next year and where Malaysia will be one of its major exhibitors.

The ambassador commended efforts of the Kazakh government to modernise infrastructure and transportation facilities along the old Silk Route from Europe to Asia to improve the connection between the two regions, according to the embassy.

The expedition crew began their journey in Pahang Sept. 24, making their way to Thailand, Laos and China before reaching Kazakhstan. The team will next travel to Moscow (Russia), Belarus, Poland, Germany, the Netherlands, Belgium and France before their final stop in London (England). 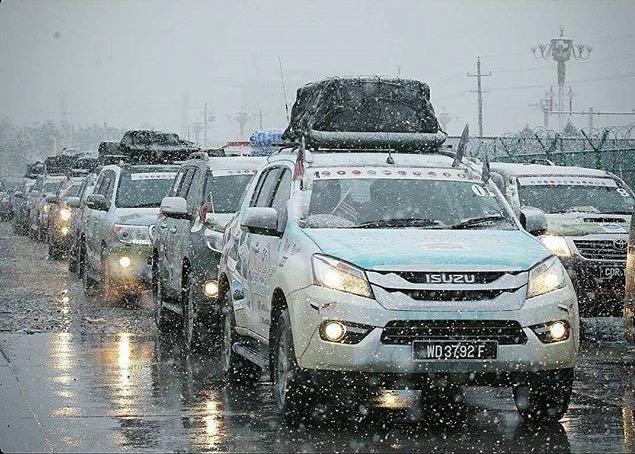 The crew expects to complete the 17,000-kilometre journey in 52 days.

The “Visit Pahang 2017” campaign aims to promote Pahang to tourists. The campaign seeks to increase tourist flow to 15 million visitors per year with $3.5 billion in tourism income by the end of next year, according to the embassy press release.

About 18,000 Kazakh tourists visited Malaysia in 2014, which is the same year the Malaysian Tourism office under the Malaysian Embassy in Kazakhstan opened.

“Almaty is the regional hub and a newly identified growing market for promoting Malaysian tourism in Central Asia,” the report added.