By Malika Orazgaliyeva in International on 10 October 2016

ASTANA  – Kazakh President Nursultan Nazarbayev announced today the establishment of a new prize, the Nazarbayev Prize for a Nuclear Weapon Free World and Global Security, as well as his decision to award the first prize to King Abdullah II of Jordan for his contributions in this domain. 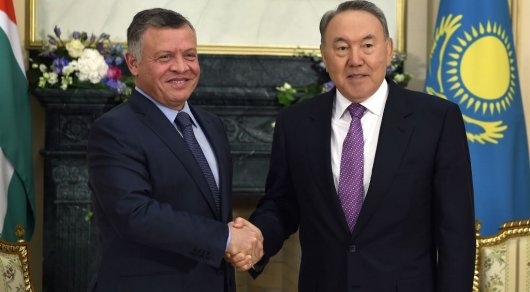 The proposal for President Nazarbayev, who had shut down the Semipalatinsk nuclear test site and renounced the world’s fourth largest nuclear arsenal in the early 1990s, to establish a prize in support of leaders and activists contributing to global nuclear disarmament was first voiced by speakers at a recent international conference in Astana.

The conference, titled Building a Nuclear Weapon Free World, brought together more than 200 international and 800 local participants to commemorate the UN International Day against Nuclear Tests on Aug. 29, the 25th anniversary of the closure of the Semipalatinsk test site.

In response, Nazarbayev, who has continued to push for global nuclear disarmament during the past quarter century, including through the establishment of the Central Asian Nuclear Weapons Free Zone, said he would consider such a move.

“Today I would like to tell you and our people about the new initiative. I have made a decision to establish international award for contribution to nuclear disarmament and security,” Nazarbayev said Oct. 10 at the Akorda presidential residence, choosing an official ceremony of the presentation of credentials by newly appointed ambassadors to make the announcement. “This is Kazakhstan’s international prize. This year, King Abdullah II of Jordan has been chosen as the first laureate of this award. Later on, a special committee will be established, by the decision of which the prizes will be awarded to the laureates on the day of closing the Semipalatinsk test site on Aug. 29.”

King Abdullah’s commitment to global peace and security has been notable through his efforts to accept more than 1.5 million Syrian refugees into Jordan and to turn the Middle East into a zone of peace, including through the establishment of a nuclear-weapons-free zone in the region.

The prize announcement follows President Nazarbayev’s manifesto “The World. The 21st Century” which he presented earlier this year in Washington.