By Anuar Abdrakhmanov in Sports on 25 October 2016 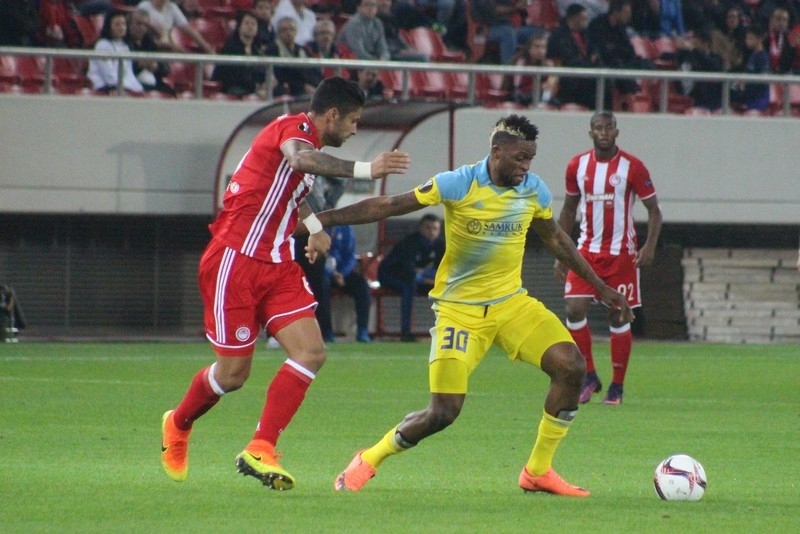 Ahead of the match at Stadio Georgios Karaiskakis October 21, the Greek club was widely viewed as the favourites of the match. Olympiacos FC has great experience playing in the advanced stages of European football tournaments, and overall has a rich history. Today, their lineup features such well-known players like Oscar Cardozo and Esteban Cambiasso who have played in Europe’s richest clubs, such as Benfica Lisboa or Internazionale Milano.

A few days before the match, FC Astana suffered a humbling defeat in the domestic league against their main rivals for the title, Kairat Almaty 0:2. Moral were not helped by the absence in Piraeus of two of the team’s key players Nemanja Maksimovic and Azat Nurgaliyev as both had injuries.

From the first minutes of the match, the Greek club seized the advantage. Defender Takis Retsos’ header following a corner kick from close range but Astana’s goalkeeper Nenad Erich managed to save. A powerful strike by Olympiacos’ captain, midfielder Luka Milivojevic was deflected into the penalty area by Eric, and Astana’s defender Abzal Beisebekov cleared the ball away just quickly enough. A free kick from striker Cardoso and the ball went slightly over the bar. A quick break-in into the penalty area resulted in a cross to the centre, where the Greek side’s defender Diogo Figueiras made best use of the opportunity – 1:0.

Olympiakos did not stop with this and before the break resolved any doubts about who would be the eventual winners of the match. After 33 minutes, their Norwegian midfielder Tarik Elyounoussi scored the second goal. A few minutes later Brazilian midfielder Seba used his chance to bring the score to3:0. At the end of the first half, Astana had its own great opportunity to score but defender Marin Aničić’s strike hit the post.

Early into the second half, the Kazakh players managed to reduce the deficit. The club’s Congolese striker Junior Kabananga dribbled past the Olympiacos goalkeeper and scored the goal.

FC Astana then had some hope that the match could still be saved, but all plans of their Bulgarian coach Stanimir Stoilov and the Kazakh club’s slim hopes were shuttered by Roger Cañas’ second yellow card in the match which subsequently led to him being sent away from the pitch.

In the minority, FC Astana conceded the fourth goal. After 65 minutes, a double was completed by Seba.

The visitors could still score their second goal. But after 70 minutes, Kabananga missed an empty corner of the goal. The match thus ended with the score 4:1 in the Greek club’s favour.

“I congratulate Olympiacos with this victory. Tonight, they were a better side. We tried to play our game, and we had some good moments. I think the referee made a few wrong decisions. I mean Cañas’ red card. I watched the video, and he had not even touched [the Greek club’s player involved]. But, again, the rivals were a stronger side,” said Stoilov in the post-match press conference.

“It is a pity that we suffered such a defeat. We need to draw the right conclusions from this one and move on. It would be right to ask for forgiveness from the fans because of our team’s weak play last night. Olympiacos are strong team. We tried to play our game and fight to the end but the Greek team were better than us,” admitted Eric.

The return match in the Kazakh capital’s Astana Arena is scheduled to take place on Nov. 3. FC Astana remains bottom of Group B with just one point in three matches.