By Anuar Abdrakhmanov in Sports on 12 October 2016

ASTANA – Kazakh champions FC Astana in the second match of the group stage of the Union of European Football Associations (UEFA) Europa League at home drew with Swiss club FC Young Boys 0:0. Both Astana and Young Boys lost their first matches in the group to APOEL of Cyprus and Olympiacos of Greece respectively. Therefore, on Sept. 29 in the capital of Kazakhstan, both teams were determined to earn their first points in the tournament. 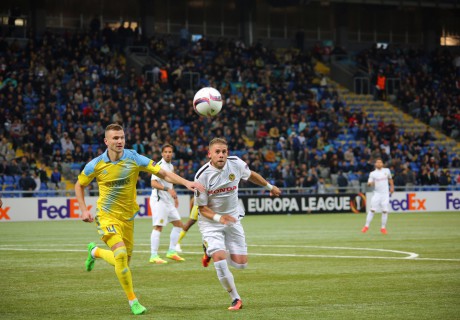 The hosting Kazakh team, from the first minute seized the initiative. However, the first dangerous moment came at the goals defended by the home club’s Serbian-born goalkeeper Nenad Eric. However, Young Boys’ Yoric Ravet attempt to send the ball above and behind Eric missed the goal.

Astana’s response turned out more threatening. After the throw-in from Astana’s defender Dmitry Shomko, the ball rebounded to Roger Cañas, the Colombian hit with a reversal, but the ball went past the far goal post. The hosts had their best chance to open the score at the 37th minute when, in a similar situation, Shomko’s throw-in led to George Despotovic’s bicycle kick but that only hit the crossbar.

After 39 minutes, Shomko had the opportunity to score as he went for the far corner of the Swiss goal but the strike lacked accuracy.

In the second half, the hosts had new chances to score from Shomko’s inclusion into attacks. But the defender’s strike went straight into the Young Boys goalkeeper’s hand. Astana’s Abzal Beisebekov tested his luck from a distance. But once again the goalkeeper stood in the way of the ball. 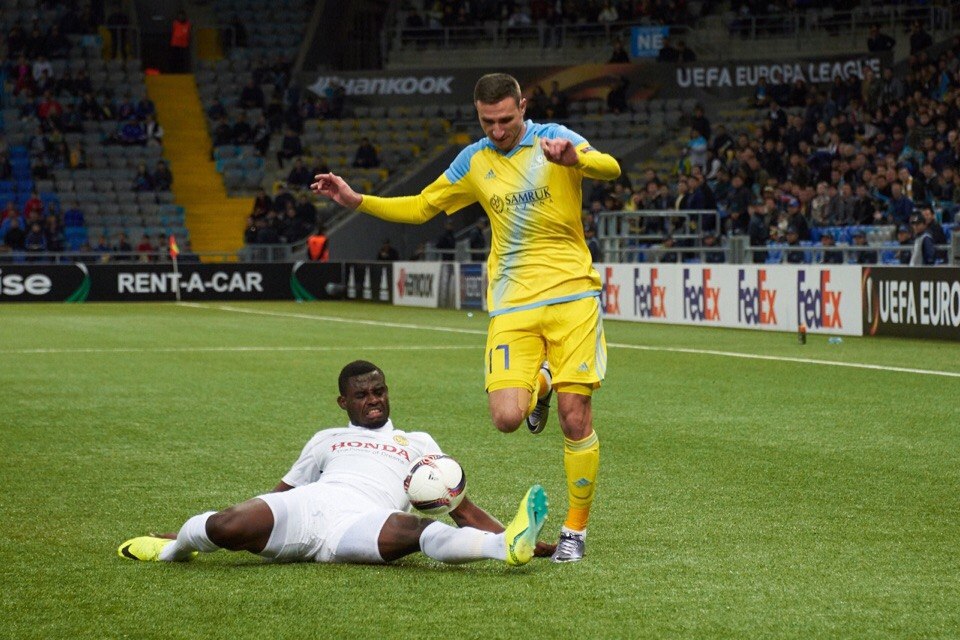 At the end of the match, Young Boys had the opportunity to earn all three points in Astana but striker Kwadwo Duah lacked composure to complete the dangerous cross from his teammate and the ball went over the crossbar. Thus, a rather boring match ended goalless and the two teams earned one point each.

“Young Boys are strong opponents, the second strongest team in Switzerland after Basel. Astana played with a great desire to win. Unfortunately, the game’s outcome was disappointing for us. We planned to actively use the flanks so that our strikers clung to the ball, but we did not show enough accuracy in the completion of our attacks,” FC Astana’s Bulgarian manager Stanimor Stoilov said at the post-match press conference.

“We played well and created some good chances to score. The Swiss team had only one opportunity in the end. But they played well in defence and made few mistakes. It is a pity that we did not use our moments since we had all the chances to win this game,” Shomko commented.

In the first match of the UEFA Europa League’s group stage, FC Astana lost in Cyprus on Sept. 15 to APOEL Nicosia 1:2. The tournament’s next match for the Kazakh champions will be against Greek powerhouse, Olympiacos Athens. The match will be played in Astana Arena on Oct. 21.