By Kamila Zhumabayeva in Culture on 7 September 2016 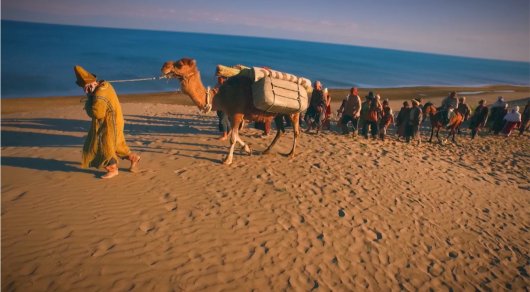 A still from the film. Photo credit: Tengrinews.kz

“A Kazakh film is deservedly bestowed with the highest award of the film festival. The film uncovered the culture and life of the Kazakh nation in a way that aroused great interest of all the visitors of the exhibition. We hope for further fruitful cooperation between our countries,” said Xinjiang culture department deputy head Kenes Sani, according to Caravan.kz.

About 80 films were presented at the festival held within the international culture and creative industry exhibition. “Pod vechnym okom neba,” directed by Kazakhfilm President Bakhyt Kairbekov, was given the highest award in the “Innovational project” category and received a prize from the Chinese Ministry of Culture, reported Tengrinews.kz.

Commissioned by the Kazakh Ministry of Culture and Sports and filmed in 2015 by the Kazakh Research Institute of Culture, the film is based on President Nursultan Nazarbayev’s book “V potoke istorii” (“In the Stream of History”), reported the agencies.

According to the general opinion of festival participants, Kazakh films are becoming more popular with foreign audiences. “People get to know about the culture of the Kazakh nation, traditions and customs by watching films,” noted Caravan.kz.

“Pod vechnym okom neba” was shown earlier on Vremya, the Russian television channel, and the Kazakhstan national channel in the Kazakh language, awarded “Best script” at the 2015 World of Knowledge film festival and presented at George Washington University and Robert De Niro’s Tribeca Film Festival, both in the United States, according to an earlier report.

“It is a great honour for us to show the film in China, which reveals the rich history of the Kazakh nation with its many traditions and customs. The screening of ‘Pod vechnym okom neba’ is one more important step in establishing cooperation in the culture field of the two countries,” said Kosman Kazhytai, head of the Ürümqi-based animation company Abai Zholy, reported Caravan.kz.

In addition to the film festival, the Kazakh Research Institute of Culture participated in an international exhibition. Several thousand people visited the country’s stand, where they had the chance to learn about the institute’s activities, Kazakhstan’s innovative, cultural, investment and tourism potential, and Kazakh scientific achievements. Guests were also invited to view “Pod vechnym okom neba.”