By Malika Orazgaliyeva in International on 27 September 2016

ASTANA – Kazakh Foreign Minister Erlan Idrissov addressed the 71st session of the United Nations General Assembly (UNGA) while in New York Sept. 24. His participation contributed to further advancing the global peace initiatives of President Nursultan Nazarbayev, as well as quality preparations for the nation’s upcoming membership in the Security Council in 2017-2018 and comparing notes on the most important issues for Kazakhstan with the widest range of international partners, according to the Ministry of Foreign Affairs. 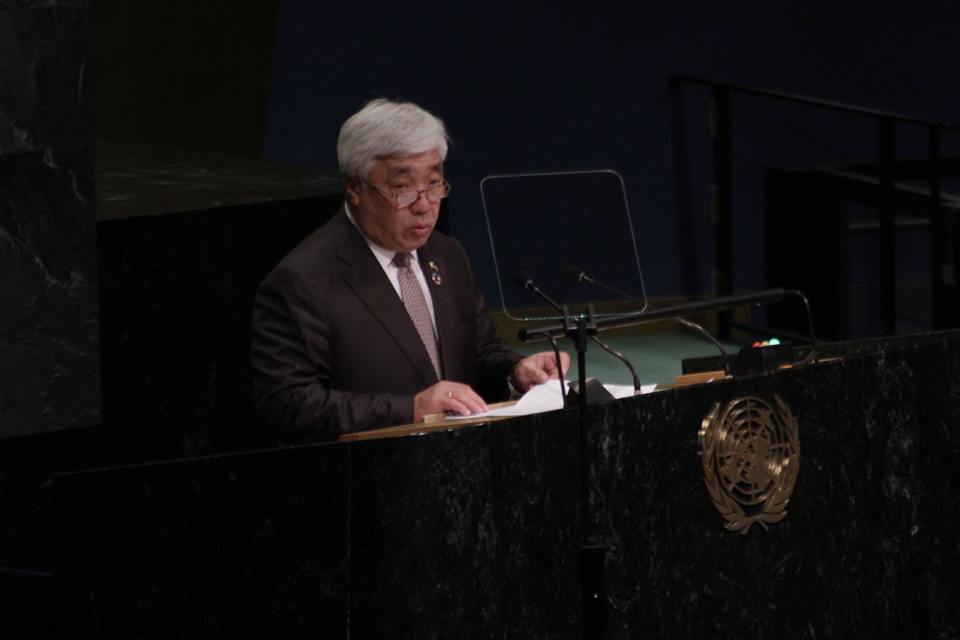 “This year Kazakhstan celebrates the 25th anniversary of its independence. I remember that back in 1991 some observers doubted Kazakhstan’s ability to survive as a sovereign nation given its multi-ethnic, religiously-diverse population, an unbalanced economy and the huge material and moral burden in the form of military infrastructure and a nuclear arsenal,” he said.

“That legacy was a challenge which we managed to turn into an opportunity. Over the last quarter of a century, we have completed a journey from a country non-existent on the political map to a stable middle-income nation and respected member of the international community. We take our election to the Security Council as an international recognition of the soundness and maturity of our foreign policy and a deserved achievement of our independence,” said Idrissov.

The foreign minister emphasised Kazakhstan’s foreign policy is a reflection of the country’s deep-rooted belief in the power of discourse.

“A call for dialogue is the central message of President Nursultan Nazarbayev’s Manifesto ‘The World. The 21st Century,’ which has been distributed as an official document of the Security Council and General Assembly. This manifesto offers a realistic take on the world and offers an ambitious vision based on unity rather than division, on cooperation rather than rivalry,” he said.

In this context, Idrissov recalled another of Nazarbayev’s initiatives to reach a world free of nuclear weapons by the UN’s 100th anniversary in 2045, as well as reported on the results of the international conference dedicated to the 25th anniversary of the Semipalatinsk nuclear test site closing held Aug. 29 in Astana. He also alerted the international community to the Astana Peace Summit to be convened in November.

In addition to his speech, Idrissov took part in the traditional coordination meeting of the Organisation of Islamic Cooperation (OIC) Foreign Ministers. OIC Secretary General Iyad bin Amin Madani and other participants stressed the relevance of the joint declaration on Islamic reconciliation adopted by the presidents of Kazakhstan and Turkey during the OIC Summit in Istanbul in August. Issues were reviewed regarding preparations for the first OIC Summit on Science and Technology scheduled next year in Astana. Idrissov also called on the participants to become involved in EXPO 2017.

The minister attended a working lunch of the Collective Security Treaty Organisation (CSTO) Foreign Ministers, as well as a number of side events dedicated to climate change and its impact on small island states and the consolidation of international efforts to implement the goals of sustainable development approved last year by the UNGA.