By Anuar Abdrakhmanov in Sports on 10 September 2016

ASTANA – Kazakhstan’s national football team began the qualification tournament of the 2018 FIFA World Cup in Russia with an inspiring display against the Group E favourites, Poland. The match was played on Astana Arena’s artificial pitch Sept. 4. 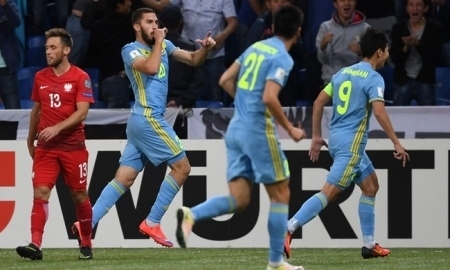 Few pundits believed the Kazakhs had a chance to deny a win to a team that two months ago made it to the top eight in France, where they lost on penalties to Portugal, the eventual Euro 2016 champions. Moreover, the Polish squad arrived in Astana with its strongest lineup, led by Bayern Munich’s star striker Robert Lewandowski. Kazakhstan’s 2:0 defeat in Bishkek in the last friendly before the World Cup qualifications opener did not bring any additional hope to the home team’s fans.

The visitors made it clear from the very beginning that they would not be satisfied with anything less than a confident victory. They scored in the ninth minute of the match, with Bartosz Kapustka converting a cross from the right wing, which was missed by Sergey Malyi and Abzal Beisebekov and left goalkeeper Stas Pokatilov defenceless.

The Poles continued their push, but an Arkadiusz Milik attack hit woodwork. In the 35th minute, Yeldos Akhmetov brought Lewandowski down in the penalty area and Lewandowski used his chance from the spot to make it 2:0.

Late in the first half, Kazakhstan had its first real chance to score. The team’s most active player and captain, Bauyrzhan Islamkhan, dribbled past the defenders to come one on one with Lukash Fabianski, but his attempt also hit the bar. Then Serikzhan Muzhikov’s superb volley led to a header by Islambek Kuatov, but Poland’s former FC Arsenal goalkeeper saved his team. Poland responded with a dangerous attack, as Milik faced Pokatilov but hit the bar once again.

Kazakhstan seemed doomed – until in the 51st minute, when Dmitry Shomko’s volley was converted by Sergey Khizhnichenko to make the score 1:2. The striker played in Poland, albeit with little success, a few seasons ago with Korona Kielce.

After that, Kazakhstan manager Talgat Baisufinov made a few substitutes seeking to strengthen defence and defend the unexpected tie. Both teams’ players began playing tough, and at times rudely, and four visitors and six hosts were shown a yellow card.

Poland had a few more chances to change the score, but couldn’t come up with a goal, leaving Kazakhstan with a stunning upset in the qualification campaign’s first match of the group.

“I will perhaps remember this birthday for my whole life. I congratulated my team on their performance in the second half. On the one hand, I am happy with the result, as a draw with Poland is good for us. On the other hand, I feel like we lost two points tonight [rather than earned one]. All of our players deserve praise. We never gave up hope, although when you are trailing 0:2 that’s never easy,” Baisufinov commented after the match.

“I believe strong motivation [also from our fans] helped in securing a desired outcome. The fans believed in us, though in the first half we did not perform well. In the second half, the team managed to mobilise itself and show character,” Shomko said. Kazakhstan’s next game will be played away in Montenegro Oct. 8. Other teams in Group E are Denmark, Romania and Armenia. Only the group winner will earn a straight spot for the World Cup in Russia. Teams who place second in Group competition will play elimination matches with each other.