ASTANA – Middle weight World Champion according to the World Boxing Association (WBA), International Boxing Organisation (IBO), International Boxing Federation (IBF) and World Boxing Council (WBC) Gennady “GGG” Golovkin (36-0-0) earned his 36th career win and 23rd consecutive knockout over Britain’s Kell Brook (36-1-0) by forcing his corner to throw in the towel in round five at the O2 arena in front of Brook’s 19,000 home crowd in London September 10. For Golovkin, it was his biggest cash prize fight of more than $4 million, according to Daily Star. If anyone was expecting the Crouching Tiger Hidden Dragon out of this matchup – they were deemed to be disappointed. The big drama show, as Golovkin promised it to be prior to coming out in the ring, did happen, but in more of a “Sated Tiger Desperate Rabbit” style.

Too many negative signs, the superstitious were saying, were against the Kazakh that night: sympathy for Brook, who went up two weight categories to meet Golovkin; the late arrival of the Kazakh to London, as he landed only one week before the fight, and, of course, Brook’s home crowd. Yet nothing could stop GGG. 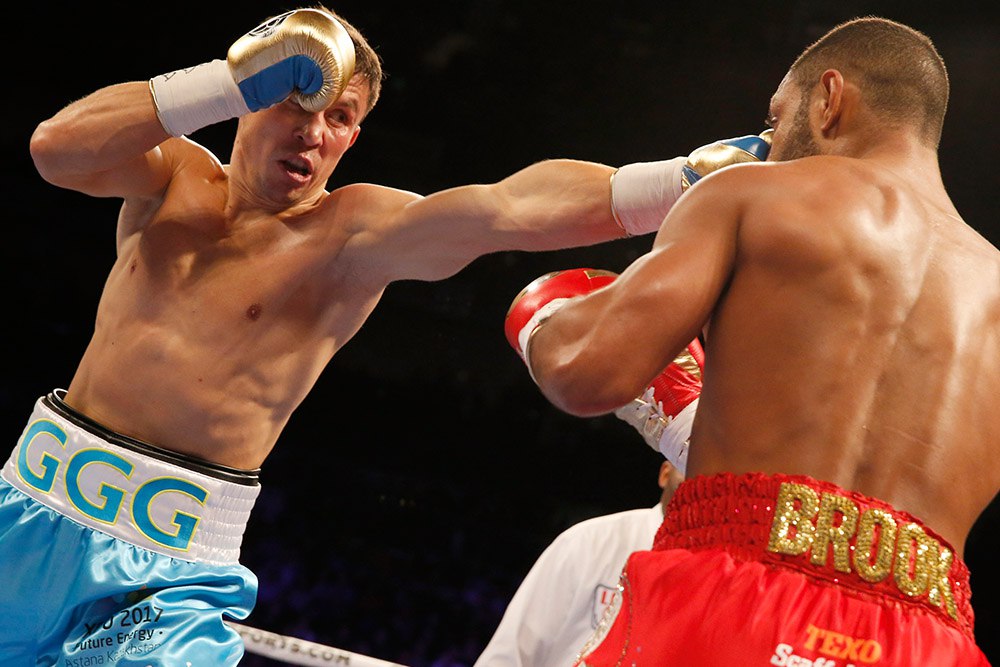 The first round began with the boxers diving right into the action, Golovkin as usual played his game and Brook played along and boxed head to head. That later proved a mistake for Brook. Golovkin didn’t hesitate to throw wide open left hooks, Brook took them all well in round one and managed to return quite a few himself. At the bell, Golovkin imposingly walked to his corner as if after a training session. 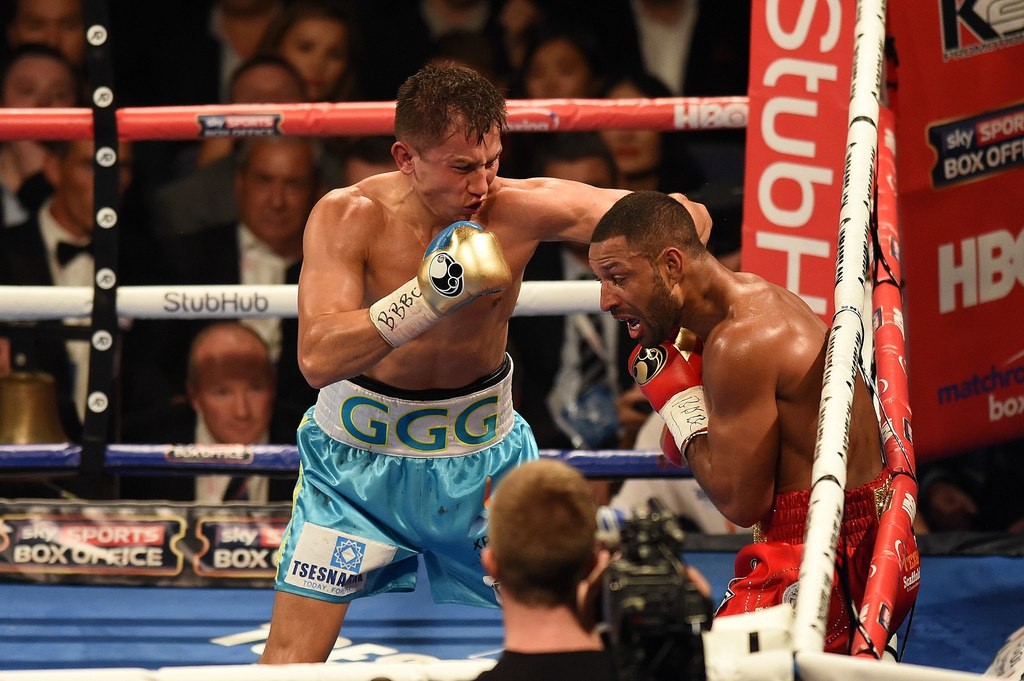 In the second round, Golovkin used lightning-fast jabs to irritate the Brit and created openings. Golovkin started sniping Brook out and, as Brook admitted after the fight, Golovkin broke the Brit’s right eye socket and Brook was seeing three Golovkins – a nightmare no boxer would want to experience. In the last minute, however, Brook gave Golovkin a good shaking by landing a few power punches: one uppercut and right hook really shook the Kazakh, as it seemed, earning Brook’s crowds’ cheers. But Golovkin kept inviting the Brit to take a better shot. The big drama was on.

In the third round Brook went down in an apparent “slip and fall” incident, no count was given. He quickly rehabilitated after the trip and continued. The game plan changed in round three, however, as the Tiger was getting hungry and was sharpening its claws, while the Rabbit was seeking escape and out of desperation had to adjust and use his legs. Brook tried running, returning shots, defending but all that wasn’t helping – he smelled trouble: Golovkin’s each swing looked like it could be the final blow. Those that did land kept stinging Brook adding up to the total “painometre” and Brook kept touching his right eye indicating the trouble that was forthcoming. 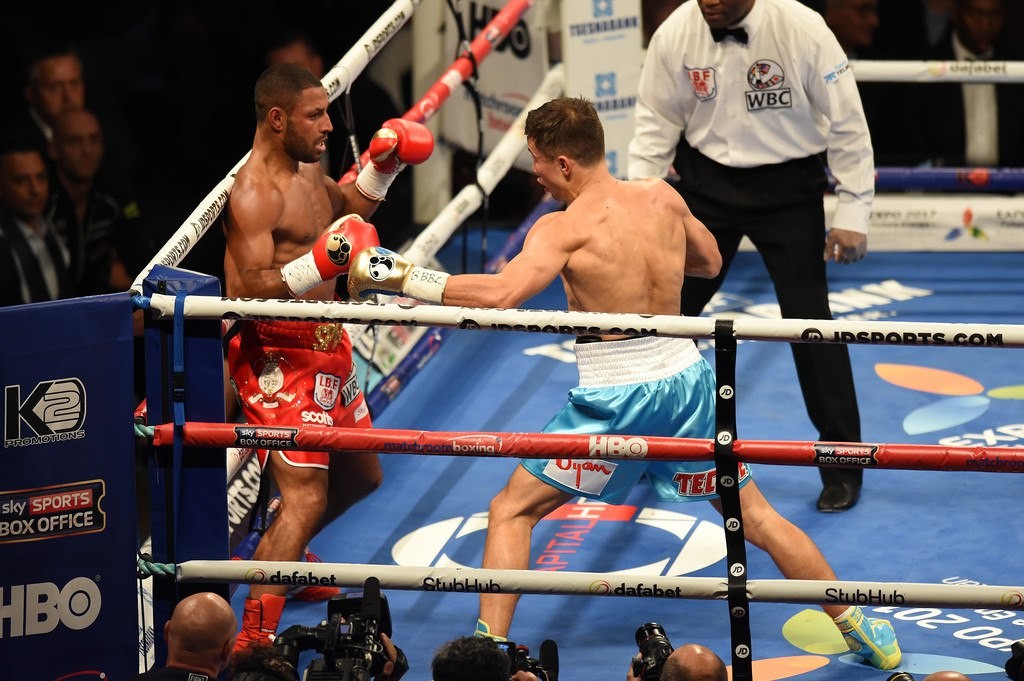 In round four, Brook, who earlier was showing he could sustain Golovkin’s blows, clearly was hurt by each shot. Boxing with GGG, literally with three Golovkins at that time, the Brit deserves credit for returning some solid shots.

By round five Brook might as well have been seeing five Golovkins through his broken eye socket, the Tiger was unleashing his fury, while the big drama show was nearing its predictable finish. 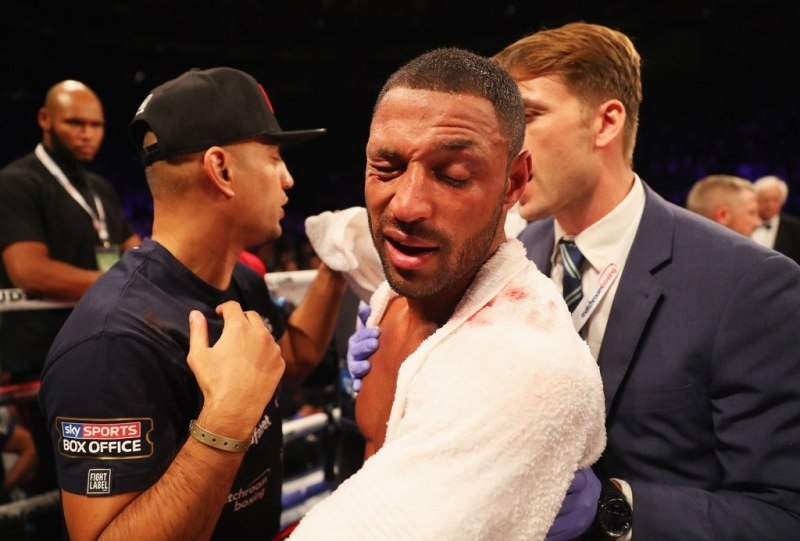 Brook, in a commendable way took some concrete shots from the Kazakh champion. Brook was collecting nearly every shot thrown at that point, though opening his arms wide showing he was all right, showing he wanted to continue. He was touching his eye, he really was having problems with it and perhaps that explains why he picked up even the slowest jabs from Golovkin. While Brook kept taking punches his corner couldn’t take it anymore. About one minute until the end of round five, his corner waved the white towel as a sign of abdication. However, the referee failed to notice it right away until it was actually thrown to his feet. 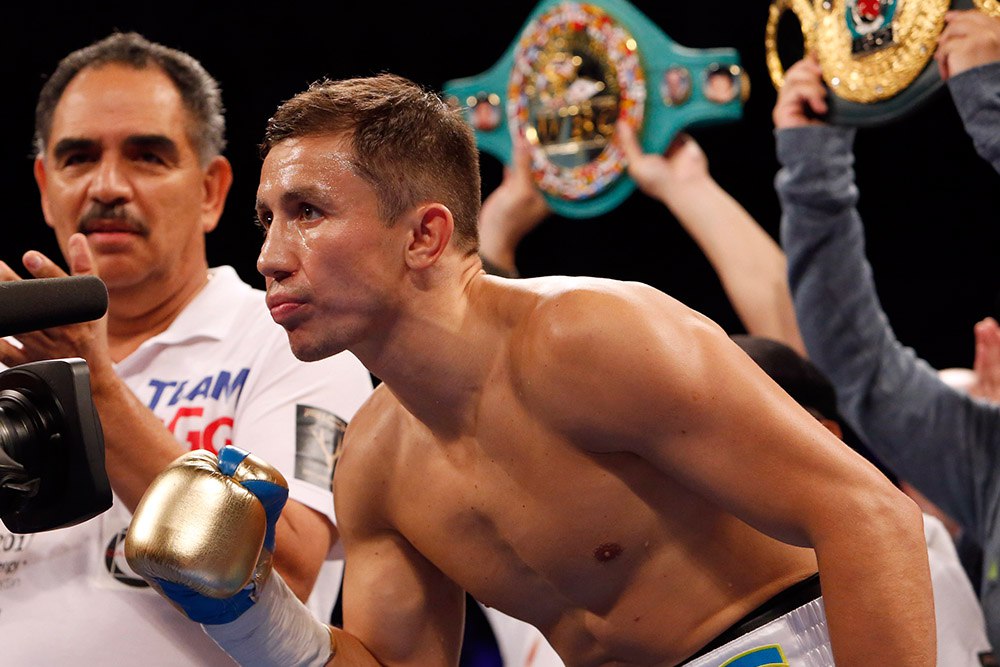 The hyped crowd initially booed the coach’s decision. But Brook was saved from a cruel beating and ended up in the hospital after the bout.

“Thank you very much, London,” Golovkin said after the match. “I always bring a big drama show. I knew that Kell was a very good fighter. But he’s not a middleweight. He’s just not. I respect him, because he is very good, but he’s not so strong. He didn’t hurt me at all. There were a lot of punches, but I didn’t feel them. I respect Kell. And thanks to his corner. I’m a boxer. So now I want a unification fight. I would absolutely come back to the U.K. to fight, and I would like to fight Billy-Joe Saunders for his belt. But I am open to everybody.”

Saunders tweeted that he would be willing to fight GGG. Golovkin said he was interested to fight Saunders even more than Saule Canelo Alvarez and that one day he would like to come back to the U.K. for that fight.

In the end, GGG sold out the nearly 20,000-seat O2 arena in just 12 just minutes. Brook’s name is now associated with empathy and courage and Golovkin finally landed a serious cash prize match. And that means soon enough the big boxing names will have no excuse to avoid a fight with GGG.