By Aiman Turebekova in International on 7 September 2016

ASTANA – The Kazakh Foreign Ministry hosted a ceremony Sept. 6 to award the winners of the third annual “Kazakhstan through the Eyes of Foreign Media” contest organised by the Ministry and the Club of Chief Editors of Kazakhstan. 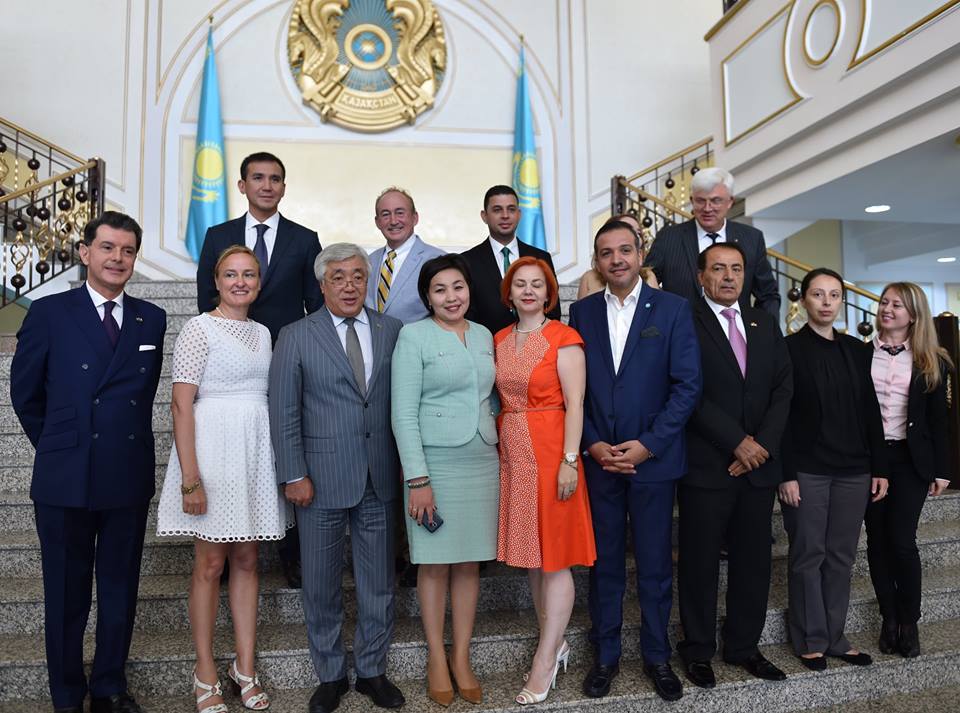 The winners represent France, Jordan, Russia, Turkey and the United States. As a prize, they received a trip to Kazakhstan in September, including visits to Astana, Almaty and the Borovoye resort area, as well as an extensive cultural programme.

“The media as a ‘fourth’ estate of power performs vital educational and ideological work, forms the informational space and has a huge impact on public opinion,” said Foreign Minister Erlan Idrissov in welcoming the winners.

He also briefed the guests on the nation’s initiatives in various fields, in particular, nuclear non-proliferation and the fight against terrorism and extremism.

Guests representing the diplomatic corps as well as the sponsors of the contest attended the event.

“We celebrate the 25th anniversary of the independence of our country [this year]. This is a landmark event for all the people. Wings have been spreading; we aim to achieve our main goal – to enter the top 30 most developed countries of the world. Therefore, in order to achieve that, President Nursultan Nazarbayev initiated the five institutional reforms and a comprehensive programme 100 Concrete Steps aimed at modernising key sectors of the society,” said Idrissov.

During the ceremony, he emphasised the important contribution of the sponsors who helped organise the winners’ trips to Kazakhstan. The contest was made possible through partnerships with Argymak Transport Company, the Kazakh National Olympic Committee, Kazakhstan Temir Zholy national railway company and Rixos President Astana and Rixos Borovoye hotels, as well as KLM Royal Dutch Airlines.

Marina Nabatnikova, a journalist with the Russian newspaper “Argumenty i Fakty,” was selected as the winner among Commonwealth of Independent States (CIS) journalists for her article “Doomed to Growth – about our Trade Relations with Kazakhstan.”

Pauline Gavrilov of France, who writes for HuffingtonPost.fr, won among European journalists for her story “Astana 2017: What Will Be the Future Energy?” During the awards ceremony, she noted the event “is not just a dream, this is a huge achievement.” Gavrilov added the French people’s interest towards Kazakhstan has been increasing, mainly due to next summer’s international exhibition EXPO 2017 in Astana.

American Douglas Burton, who writes for “The Washington Times,” won for his article “Kazakh Studying Abroad in Ambitious ‘Future’ Programme Aims to Lift Former Soviet Republic.” In it, he told the story of a Bolashak Presidential Scholarship Programme student, Shalkar Nursetov, who studied at George Washington University to pursue a Master’s degree in media and public affairs.

Kürşad Zorlu of Turkey, representing “Yeni Cag,” took the top spot among Asian journalists for his article “The Key of Eurasia is the Development and Stability of Kazakhstan.”

This year, the contest attracted 60 entries from 29 countries. The victors will tour the same areas visited by last year’s prize-winning journalists from Argentina, Egypt, Indonesia, Poland and Uzbekistan.

Idrissov noted the quality of the applications this year and continued growing interest in Kazakhstan’s dynamic development and upcoming major events, such as EXPO 2017 and the Winter Universiade in Almaty next year.