RIO DE JANEIRO – Kazakhstan won the most medals in its history at the XXXI Summer Olympics in Rio, which ended Aug. 21.  Kazakh athletes claimed 17 medals – three gold, five silver, and nine bronze. This result allowed Kazakhstan to reach 22nd place in the medal tally among 206 countries. 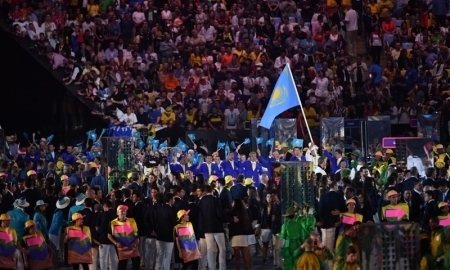 As The Astana Times reported earlier, as the competitions opened on Aug. 6, judokas Smetov and Galbadrakh won the nation’s first two medals of the Rio Olympics, a silver and bronze respectively.

Kazakh sports fans had high hopes for winning medals in weightlifting, but the doping scandal which shook the national team before Rio, and dismissal of its four leaders significantly reduced its chances. Despite this, the team achieved impressive results. From eight Kazakh weightlifters five returned from Brazil with a medal.

Nijat Rahimov won Kazakhstan’s first gold of the Rio games in the weight category up to 77 kg on Aug. 10. The 2015 world champion captured the top prize by setting a world record in the clean and jerk by lifting 214 kg.

“It was my dream. It was a difficult path. The time when people were asleep, we trained. When the snow was knee-deep, we left for the trainings. Thanks to everyone who supported me. This is, firstly, the will of God, and then (for) the huge number of people who believed in me and supported me,” Rahimov said.

On the same day, 22-year-old weightlifter Zhazira Zhapparkul won silver, lifting a combined weight of 259 kg in two exercises. First in the snatch, she lifted 115 kg and was in second behind Chinese rival Xiang Yanmei with only one kilogram separating them. In the clean and jerk, the Kazakh began at 140 kilograms, but failed on her first attempt. She got it on her second try. Xiang successfully lifted 142 kilograms on her first try. In the final attempt, the Kazakh lifted 144 kg and her rival 145 kg. As a result, Xiang grabbed the gold medal with Zhazira claiming her hard-fought silver and Egyptian Sara Ahmed winning the bronze.

“I won this medal thanks to our country and our people who supported me. My great gratitude goes to my parents, too. I am glad that I could bring Kazakhstan an Olympic medal. It is a great victory for me indeed,” said Zhapparkul.

“I am satisfied with our performance. Everyone fought and tried to reach the top three. Eight of our athletes performed here and five of them won medals. The remaining three came close to the podium, with two athletes finishing in fourth place and one in fifth. This implies a high level [of the team’s readiness]. Our success in Rio became possible thanks to our team’s hard work and the support from the National Olympic Committee, the Ministry of Sport and Culture of Kazakhstan and Kazakhstan’s Weightlifting Federation,” the national weightlifting team’s head coach Aleksei Ni commented.

In a stunning upset that shocked the swimming world, 21-year-old Kazakh Dmitry Balandin beat top-ranked Joshua Prenot of the United States by 0.06 of a second to capture the gold in 2 minutes, 7.46 seconds in the 200 metres breaststroke. Russia’s Anton Chupkov finished a close third.

“This is the biggest honour and the biggest thing I could have given to my country,” said Balandin, according to rio2016.com.  I’m very proud of that. Actually, it’s history, because it’s the first medal in swimming for Kazakhstan and I’m very happy that I’m the one that got it.”

Many swimming pundits considered Balandin’s appearance among the eight swimmers in the final a success in itself and didn’t expect much from the Almaty resident. But swimming in the outside eighth lane, Balandin stayed with the best in the world throughout the event and ultimately prevailed.

“I want to thank everyone in Kazakhstan who has supported me and believed till the end in our team. It is indeed very difficult. Maybe on TV you do not feel it, but when you are going to the start, especially in such an unusual time, you just give all the strength to please the whole country,” said Balandin.

Competitions in women’s wrestling turned out to be another success, bringing three more medals. Gyuzel Manyurova brilliantly wrestled all the way to the final and finished as runner-up in the weight category up to 75 kg. Another pleasant surprise came from a 22-years-old Yekaterina Larionova who performed in the weight category up to 63 kg. In a bronze medal match she wrestled the 29-year old Elena Pirozhkova representing the U.S. The American claimed three points in the bout’s opening part but in the second fell victim to an impressive attack from Larionova and ended up on her back, meaning an outright victory for the Kazakh athlete. Also, in the weight category up to 69 kg, Elmira Syzdykova claimed a bronze.

Another Kazakh boxer, Vassiliy Levit, could have won gold in his heavyweight match against his Russian opponent Yevgeniy Tishchenko. The 28-29 result for the Russian caused an uproar when it was announced, with spectators booing the result, and is still a matter of much discussion in the sports press. Numerous international media outlets are saying the Kazakh boxer was clearly dominant and criticize the decision.

Adilbek Nyazymbetov won silver in the 81 kg category, losing to a Cuban boxer in the final. This was his second silver from the Olympics, the first coming four years ago in London.

Indeed, before the Games, special hopes were placed on the 25-year-old. Kazakh boxers have dominated in the category, with victories by Bakhtiyar Artayev in Athens in 2004, Bakhyt Sarsekbayev in Beijing in 2008 and Serik Sapiyev in London in 2012. Therefore, fans expected only victory from Yeleussinov when he reached the final bout. He managed to meet expectations, defeating Uzbek boxer Shakhram Giyasov by a decisive 3:0.

“As this was the last fight of the tournament, I needed to pull myself together, and given it all, [I think I’ve] done my best. I have done this all my life. That is why I could handle the final fight. We [Kazakh boxers] have a good fight technique and are famous for our boxing school. I think we demonstrated that. I would like to thank all the supporters, everyone who worried about me and didn’t sleep tonight. I thank my family, my mother, sister, brother, nephew. I thank my son and wife! I dedicate my victory to all the people of Kazakhstan; this is our joint victory!” said Yeleussinov after the awarding ceremony.

“Daniyar is the captain and special responsibility was placed on him. Yeleussinov, fighting in the weight category in which Kazakh boxers have won Olympic gold medals several times, proved his superiority. Daniyar demonstrated a great desire to win; great proficiency. There are no easy matches in the Olympics, especially at the final stage. Through his victory, Daniyar proved the high level of the Kazakh boxing school,” said head coach of the Kazakh boxing team Myrzagali Aitzhanov. He also said that support from President of the Boxing Federation of Kazakhstan Timur Kulibayev had helped the team succeed.

Finally, track and field athlete Olga Rypakova, a gold medalist in the triple jump in London and since then a mother of two, added a bronze to her collection.

Although Kazakhstan was placed lower in the medals tally than in the previous Summer Olympic Games hosted four years ago in London, many fans and sports observers commended the team’s overall performance in Rio as generally successful. Hopefully, the Kazakh athletes’ latest achievements in Rio would inspire more youngsters to do sports and create foundations for the nation’s continued strength in future Olympics.