By Arsen Omarkulov in International on 31 August 2016

ASTANA – Kazakh President Nursultan Nazarbayev took questions from the international media on Aug. 29, the 25th anniversary of the closing of the Semipalatinsk nuclear test site where the Soviet Union conducted more than 400 nuclear weapons tests. The anniversary was marked by an international conference on the need to work toward a nuclear-weapons-free world. 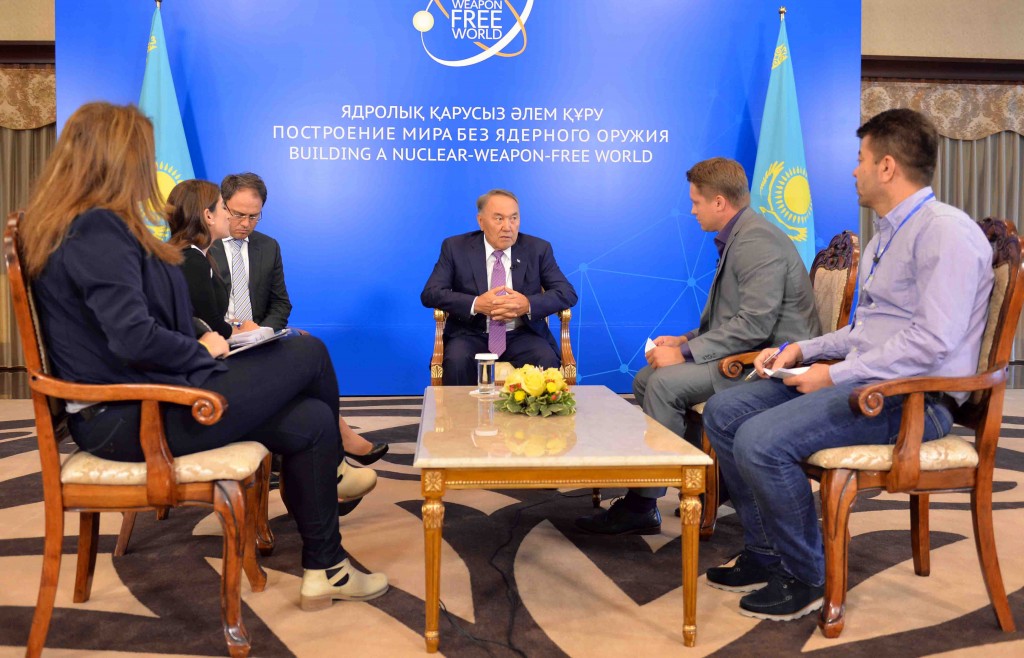 Below are some of the statements made the Kazakh President.

In response to Euronews discussing challenges and reasons for optimism in the nuclear disarmament process:

If we are not optimistic, it means we agree with the nuclear destruction of the entire planet. The challenge is that if a nuclear war started and everything was destroyed – it would be the apocalypse. I do not think anyone on earth would disagree with this, so we are optimistic. Optimistic because people want to live, raise their children and grandchildren and do not want a nuclear war. If we are pessimistic and if we just sit doing nothing, it would be a poor response to what is happening right now. Therefore, such conferences and our initiatives are aimed at conveying the danger to every person on the planet. Why? Because people are already beginning to get used to living with the presence of nuclear weapons; people have become accustomed. Generations have lived in the presence of nuclear weapons with the idea that nothing would happen. But there is a possibility that something can happen one day, that’s why we all need to be optimistic and we all need to fight against nuclear weapons.

In response to a question from BBC discussing the lessons that can be drawn from Kazakhstan’s nuclear disarmament experience:

In the world there are two states that have experienced the horrors of the atomic bomb – Japan and Kazakhstan. That’s why we have a moral right to talk about all the horrors of those kinds of bombings. So first of all, we speak out, secondly never in history have two nuclear states been in a war, which means there was never a war between the nuclear powers and God save us from that.It is a great danger. I have always said to the Iranian leadership, that having abandoned nuclear weapons, we earned the trust of the world and capital inflow per capita in Kazakhstan is the highest [among CIS countries] and we were able to develop our economy. Today, owning a couple dozens of nuclear weapons will not save you since there are thousands of them in the world and [in a number of states] nuclear weapons are not safe.

What makes you safe is the peace that you give and being respected by all nations. We got the better thing that was to receive guarantees on non-aggression against Kazakhstan and our territorial integrity rather than possession of nuclear weapons. That is what we have done – we received guarantees so that we could develop peacefully. Moreover, a huge amount of money would have had to have been spent on the maintenance, development of nuclear weapons while we needed to build an independent state and we succeeded in that. This can serve as an example for many states to do what Kazakhstan did.

In response to a question from CNBC Arabia discussing prospects of a nuclear-weapon-free zone in the Middle East similar to an experience in Central Asia:

In Central Asia, we were able to take such a decision because there was peace and understanding among our countries, there were no conflicts. While the Middle East is in astate of war, there is no trust between states in the region, there is extremism which evolves in terrorism. Before speaking about creating a nuclear-weapons-free zone, we should work on trying to establish peace, to solve the existing conflicts, to give people a chance to live in peace and after that every single one will stand for giving up nuclear weapons, that’s my opinion.

In response to a question from Euronews discussing the establishment of an international prize for contributions to nuclear disarmament (an initiative first unveiled at the Aug. 29 conference):

Prizes like this already exist in the world. There is a Noble Peace Prize, which was awarded to President Obama and there is a number of other peace prizes. So we don’t want to be repetitious.

We heard the initiatives coming up from the speakers today about a specific prize. We are speaking specifically about my manifesto and about a world that is completely free from nuclear weapons. I think that there should be a prize to be established to support officials, politicians, journalists and common people for their contribution to freeing the world from nuclear weapons. And I understand that renouncing nuclear weapons is a very complicated issue – nobody who has nuclear weapons wants to renounce them.

But we cannot just sit and wait doing nothing. Today, we have gathered here members of parliaments from around the world and they can come back to their countries and mobilise global public opinion against nuclear weapons.

So we will think about the establishment of such a prize, which I believe needs to have a very respectful organising committee who will nominate candidates for such a prize. And if there is enough time, we hope to announce the first candidate during the Astana Peace Summit in November 2016. And we will start encouraging those who fight for nuclear weapons free world.