By Malika Orazgaliyeva in International on 4 July 2016 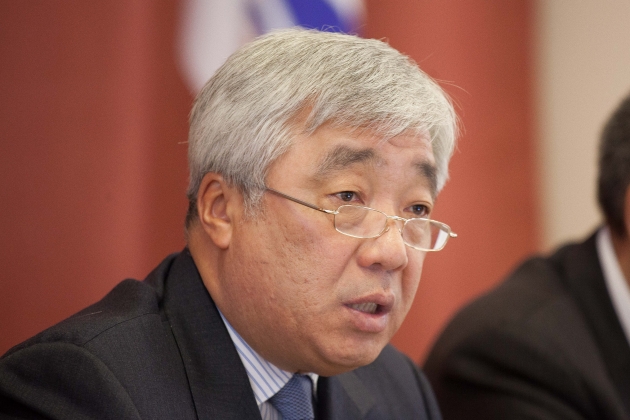 He noted President Nursultan Nazarbayev outlined the primary tasks for the Ministry of Foreign Affairs (MFA). In the conditions of an unstable global economic situation, economic diplomacy requires improving its methods and tools. Thus, attracting foreign investment and technology became one of the MFA’s key activities. The venture is also suitable within the framework of the implementation of industrial and innovative projects, Nurly Zhol programme, Kazakhstan2050 strategy and promoting the country’s exports to foreign markets.

Kazakh embassies abroad have been given specific instructions to intensify their activities in the host countries depending on their economic, investment and technological capabilities, as well as the interests, needs and priorities of Kazakhstan’s economic development, said Idrissov.

He added in order to improve the nation’s investment climate, the President directed creation of theAstana International Financial Centre(AIFC). The centre will hold negotiations with financial and business circles of the Commonwealth of Independent States (CIS) countries, the Middle East, Europe, the United States and Southeast Asia.

Concerning the nation’s role in relieving the global nuclear threat, Idrissov noted unfortunately the nuclear non-proliferation and disarmament regime is now in a crisis and the risk of nuclear weapons use is higher than at any time since the end of the Cold War.

“Kazakhstan has consistently followed the course of strengthening nuclear security in all aspects since the early days of independence. President Nazarbayev defined the promotion of global nuclear security as one of the priorities of our work in the UN Security Council,” he added.

On Aug. 29, Astana will host “Building a Nuclear Weapons Free World,” an international conference dedicated to the 25th anniversary of the closing of the Semipalatinsk test site. The event is being organised by the Senate of the Parliament, MFA and Parliamentarians for Nuclear Non-proliferation and Disarmament.

The conference will focus on strengthening the political will on the international level and determining further steps to prohibit and eliminate nuclear weapons. Consequently, it will contribute to consolidating Kazakhstan’s position as a world leader in charge of the problems of nuclear disarmament, said Idrissov.

Regarding Kazakhstan’s recent election as a non-permanent member of the UN Security Council for 2017-2018, the minister underlined the MFA gained invaluable experience through the hard work on the country’s bid, which began in June 2010.

“President Nazarbayev personally was involved in the promotion of Kazakhstan’s candidacy. He actively discussed this issue in almost all negotiations with the heads of foreign states and governments,” Idrissov said.

“Our country declared four priorities of its future work in the UN Security Council. These are nuclear, energy, water and food security. Through their promotion, Kazakhstan intends to closely cooperate with all partners without exception in the Security Council and the UN as a whole,” he said.

As a member of the Security Council, Astana will also represent the interests of the whole of Central Asia and raise important issues for the region, noted Idrissov. He added intense work lies ahead to fulfil its role at the new level.

Kazakhstan – Land of the Great Steppe, the app recently presented by the MFA,generated great interest among both foreign and Kazakh users.

The app serves as a digital encyclopaedia of Kazakhstan, covering a wide range of topics such as the country’s geography, history, society, culture, government, international relations, economy, tourism, Astana and EXPO 2017. It can be downloaded from the AppStore or Google Play Market by entering Kazakhstan Land of the Great Steppe in the search box.

Most of the photos and video materials are exclusive and have never been previously published. The developers have set a high bar for the technical and artistic requirements of the quality of the materials.

“We hope that our application will be useful to all who are interested in getting to know our beautiful country and bringing it closer to their friends and acquaintances. I am sure that through this application everyone can discover many new and amazing facts about Kazakhstan. It has three language versions ​​– Kazakh, Russian and English,” said Idrissov.

The minister noted the number of downloads is growing every day.This is the first modification of the app and some shortcomings are possible. The MFA is willing to listen to user’s constructive opinions.