By Anuar Abdrakhmanov in Sports on 25 July 2016

ASTANA – FC Astana, the capital’s main football team, beat its Lithuanian opponent FC Zalgiris Vilnius 2-1 at home and on aggregate in the second qualifying round of the UEFA Champions League. 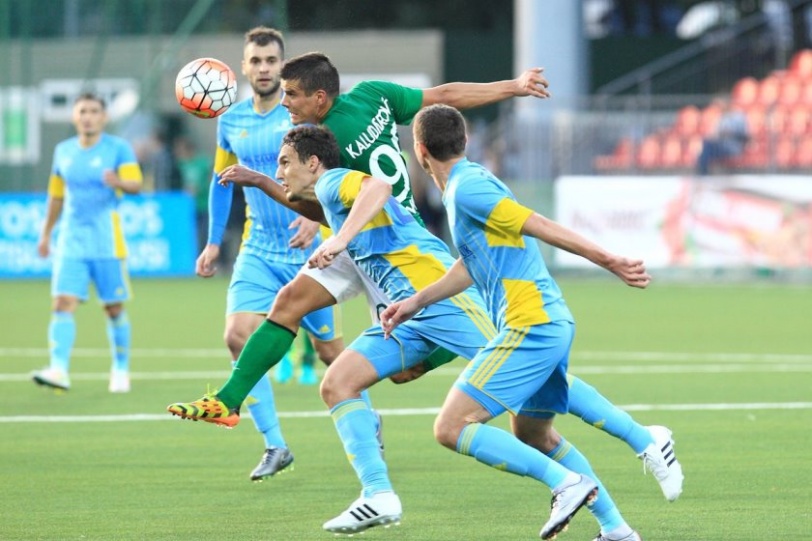 Most Kazakh fans’ hopes in the new European club season are pinned on Astana. The team’s unconvincing performance in the first away match in Vilnius caused a lot of concern, however, as Stanimir Stoilov’s team not only failed to score an important away goal, but were also close to losing the game altogether.

Following the goalless draw away, the team needed to score in Astana Arena if it wanted to progress and the players rushed forward from the first minutes. Good chances to score were missed by Junior Kabananga, Tanat Nuserbayev and Patrick Twumasi, as their strikes clearly lacked precision. The ball seemingly refused to go into the net behind Zalgiris goaltender Saulius Klevinskas. At times, defenders Marin Aničić and Igor Shitov joined the attacks. In the 31st minute of the match, the former managed to head the ball into the net following a corner kick.

Conceding a goal, the Lithuanians had to move forward more actively and endangered FC Astana’s goal defended by Nenad Eric with increasing intensity. The Serbian-born goalkeeper often had to save his net from the visitors’ dangerous strikes. Introducing striker Bahrudin Atajic as a substitute, Zalgiris markedly improved and soon managed to score as Elivelto took advantage of the rebound. If the 1-1 tie had stood, the result would have sent the guests to the next round.

The inspired visitors had a few more chances to score, but the Kazakh team avoided giving up another goal and increased the pace of their own attacks. Stoilov also fielded another striker, Djordje Despotovic.

When stoppage time began, the entire host team, including Eric, joined the attack and was eventually successful. After a cross from the right wing, Aničić scored his second goal of the match. The 2-1 final sent Astana to the next round.

“I want to thank all the fans and my players who fought to the end and deserved to win. This is a good result for our team because we can continue [our European campaign]. The match was difficult. There were chances [for us] and we could have settled it all in the first half. In the second half, the opponent was able to catch us on the counterattack. Zalgiris is a good team; they played with great desire. I am very glad that our efforts and the ability to fight until the very last second succeeded in the end,” said Stoilov at the post-match press conference.

“It was a tough match and [I am glad] we are going further. We scored first, but to be honest we should have scored a second [time], because 1-0 is a very slippery advantage. Unfortunately, we conceded a goal after the break. However, we did not give up to the end and were able to excel and win. Perhaps luck was on our side tonight. I want to pay tribute to Zalgiris, who played very well in defence and upset us on counterattacks. It was a tough match. We controlled the game, had our chances, but … In general, the most important thing is that we go further,” he added.

In the third qualifying round FC Astana will meet Celtic FC, the current Scottish champion. The legendary Glasgow club won the European Champions Cup in 1966 and were runners up in 1970, as well as reaching the UEFA Cup Final in 2003.

Astana Arena will host the first meeting between the teams 8 p.m., July 27. The return leg will take place on Aug. 3 in Glasgow’s Celtic Park stadium.

The trip will be Celtic’s second visit to the Kazakh capital. Three years ago, FC Shakhter Karaganda, whose stadium at the time did not meet UEFA standards, sensationally beat the Scots 2-0 here before losing in the second leg 3-0.

FC Kairat Almaty, the other Kazakh team remaining in the European club competition, gave way to Israel’s Maccabi Tel Aviv. The team was relegated from the UEFA Europa League following a 1-1 draw at home and 2-1 loss away.