VIENNA – Minister of Foreign Affairs of Kazakhstan Erlan Idrissov took part in a ministerial meeting commemorating the 20th anniversary of the Comprehensive Nuclear-Test-Ban Treaty (CTBT) during his working visit to Vienna June 13, where he and other government and organisational leaders discussed current nuclear disarmament initiatives. 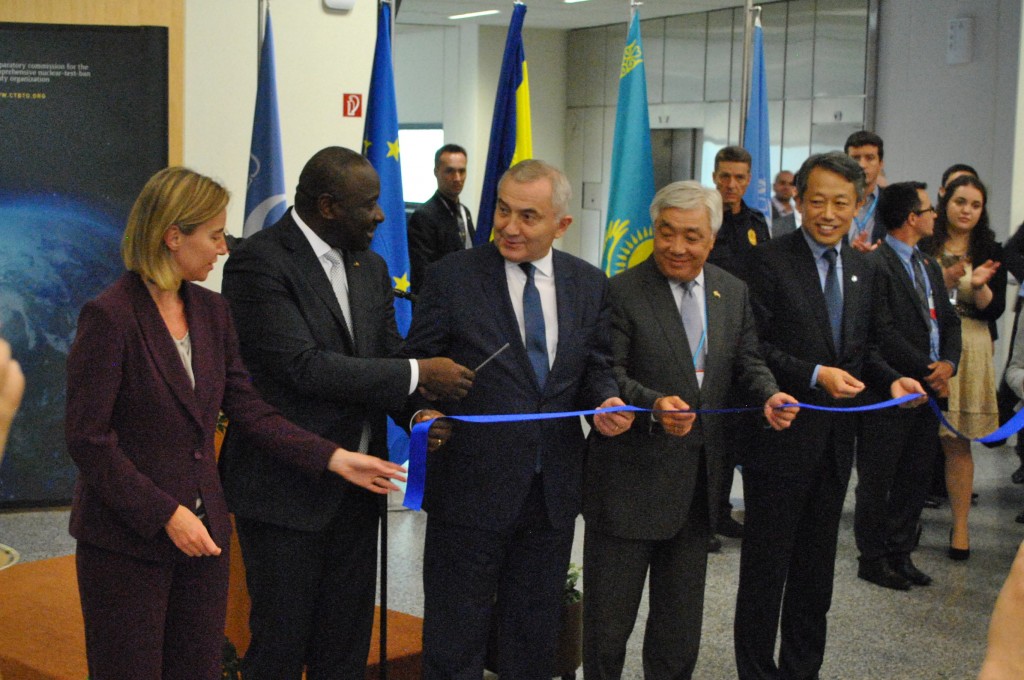 Speakers and panellists commented on the new political momentum supporting the treaty’s entry into force and devoted particular attention to countering the threat of nuclear weapons falling into terrorist hands, finding ways to bring forward the entry into force of the CTBT and generally advancing a vision of a nuclear-weapon-free world.

The meeting also took place during the year of the 25th anniversary of the closure of Kazakhstan’s Semipalatinsk Test Site, where the Soviet Union conducted extensive nuclear tests over four decades.

Idrissov emphasised that the anniversaries are linked. In closing one of the world’s largest test sites, Kazakhstan’s President Nursultan Nazarbayev made history as the first to legally ban nuclear tests. It wasn’t long before other nuclear test sites were shuttered, following this lead, which supported the conditions needed to ensure a ban on nuclear testing could become a global phenomenon, Idrissov noted. 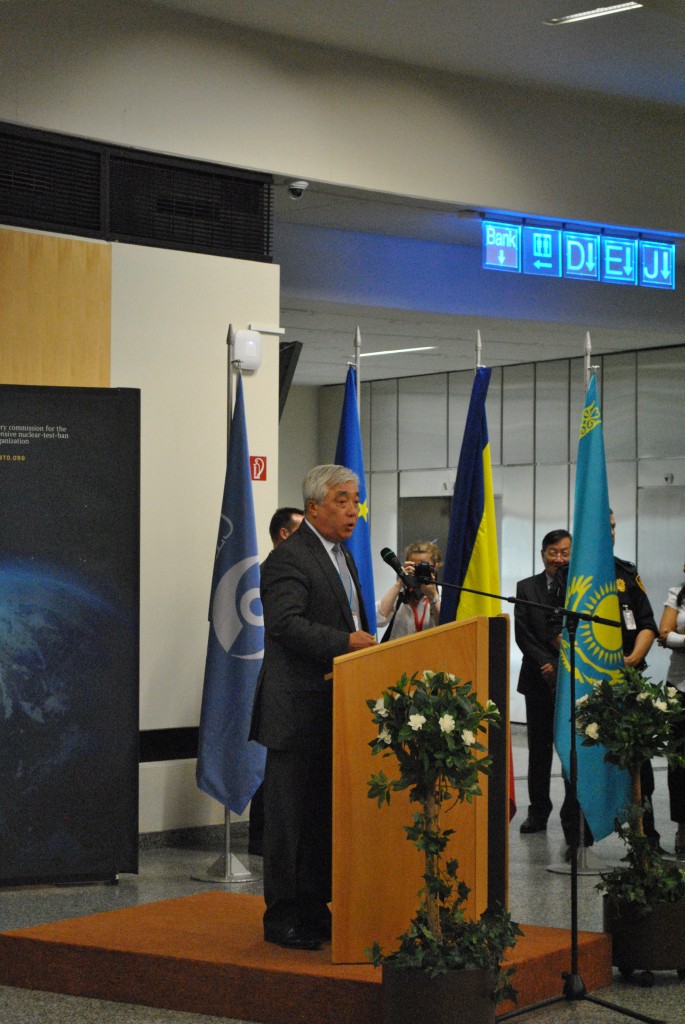 According to the top Kazakh diplomat, the closure of the site paved the way for the adoption of the CTBT, and the date of its closure – Aug. 29, 1991 – is recognised by the UN as the International Day against Nuclear Tests, now commemorated across the world annually.

Idrissov also stressed the relevance of Nazarbayev’s recent initiative – the Manifesto, “The World. The 21st Century.” In the document, Nazarbayev suggests the international community develop a holistic action plan to achieve a world free of nuclear weapons and, ultimately, of wars. It highlights the need to create sustainable peace; to eliminate military blocs, which impede broader international cooperation; to adapt the international disarmament process to new historic conditions; and to ensure fair global competition in international trade, finance and development.

Idrissov expressed confidence that the initiative could guide the international community in achieving its common goals of ensuring a safe world and strengthening the stability of the planet. He also remarked upon the long 20 years that the CTBT, a treaty designed to be a key element of the international security system, had waited to enter into force and condemned the actions of North Korea’s leadership, which he said damaged international nuclear disarmament efforts and undermined efforts to ensure the CTBT’s entry into force.

Members of the Group of Eminent Persons (GEM), members of the CTBTO Youth Group (CYG), academic representatives and parliamentarians participated in the event, holding conferences and panel discussions.

The Civil Society Panel aimed to promote dialogue and creative collaboration between experts in nuclear nonproliferation and disarmament and the next generation of specialists in these fields in order to advance the entry into force of the CTBT.

Representatives of CTBTO Youth Group presented findings from their research on benefits and new opportunities – nationally, regionally and globally – that could result from CTBT ratification by the remaining states. While CTBT has now been signed by 183 states and ratified by 164 states, it still cannot enter into force until eight specific countries sign and ratify it. Following their presentation, key academic and civil society experts on disarmament and nonproliferation discussed the role of civil society groups in promoting the treaty and raising awareness of the urgency of achieving its entry into force. 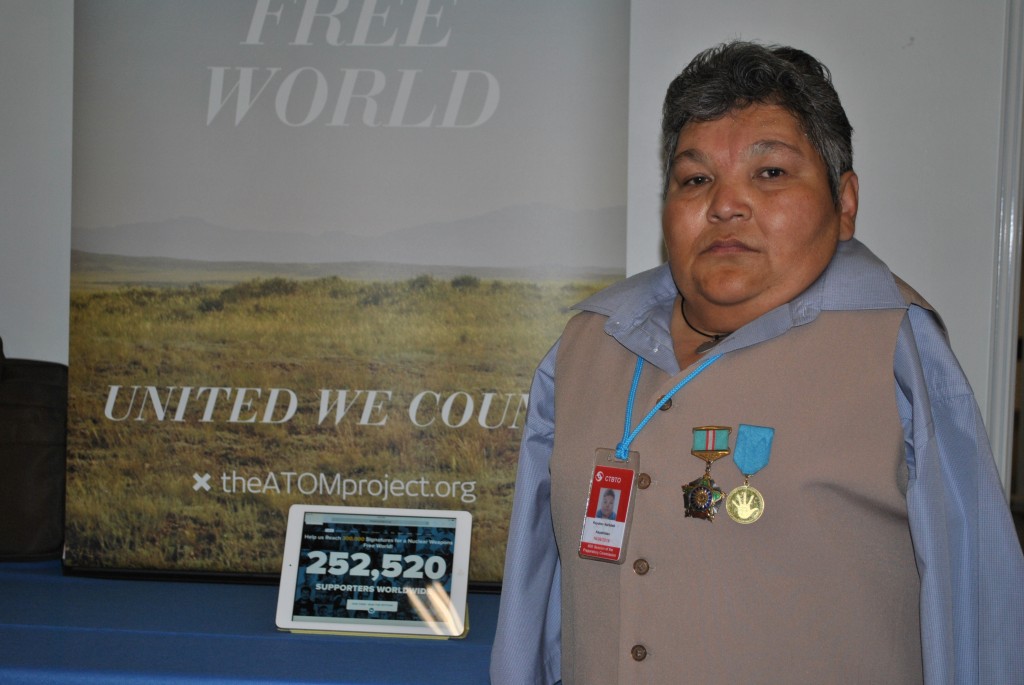 The event in Vienna included receptions, a 360 ̊ virtual reality film installation, an evening concert and an exhibition of paintings by Honorary Ambassador of The ATOM Project Karipbek Kuyukov, which was visited by a number of participants.

Kuyukov is a victim of the nuclear testing at the Semipalatinsk site in Kazakhstan. His parents were live witnesses to the nuclear tests conducted for 40 years at the site near their home and had two children who didn’t live to reach one year old. Kuyukov was born without arms.

He expresses his creativity and frustration through painting and has devoted his life and art to making sure that no one anywhere else suffers the devastating effects of nuclear weapons. Kuyukov has travelled the world on this mission and has spoken out against nuclear weapons, calling on everyone to sign a petition to world leaders to ban them for good.

The core of his exhibitions is always the fight against the nuclear weapons that marred the land of Kazakhstan.

“The diseases, tragedies, graves and pain that I witnessed in my life spur me to campaign against this evil to my dying day. I call on you to sign The ATOM Project’s online petition, which now has more than 250,000 signatures from more than 100 countries, to finally put an end to all nuclear weapons and their development,” Kuyukov said at the event. 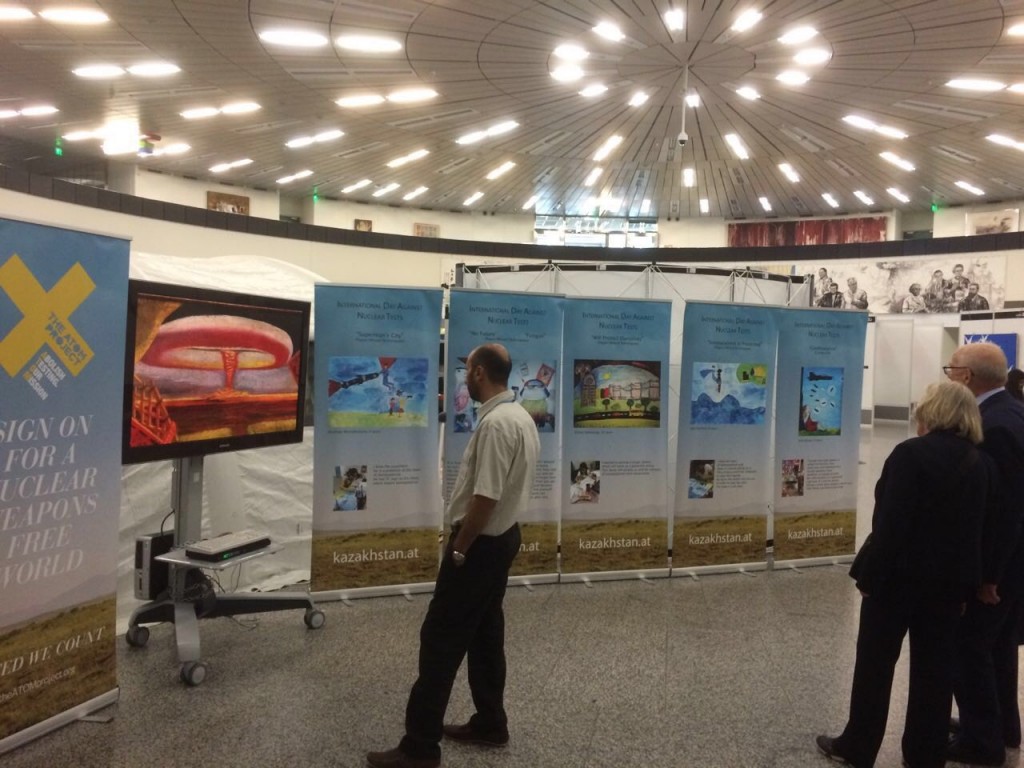 The legacy of nuclear weapons testing lives on, with children born to this day with horrific health issues associated with their family’s exposure to these tests generations past.

“The Cold War has ended but a new era of terrorism makes this call ever more urgent. Let us not give these terrorist madmen the chance to acquire any nuclear-weapons grade material to sow their carnage. This is a real danger and one that should spur nations holding or developing nuclear weapons to sit around the table of peace and negotiate a final, fair and secure end to all nuclear arsenals. The starting point would be for the remaining eight nations to sign the Nuclear Test Ban Treaty,” the artist said.

“I weep when I hear those calling for a return of nuclear weapons. I fear for our planet and humanity when I read news stories about countries rebuilding their nuclear arsenals. After all the horror, all the fear, and all the danger, the recent terrorist attacks, have we learnt nothing? How many more, like me, must suffer?” 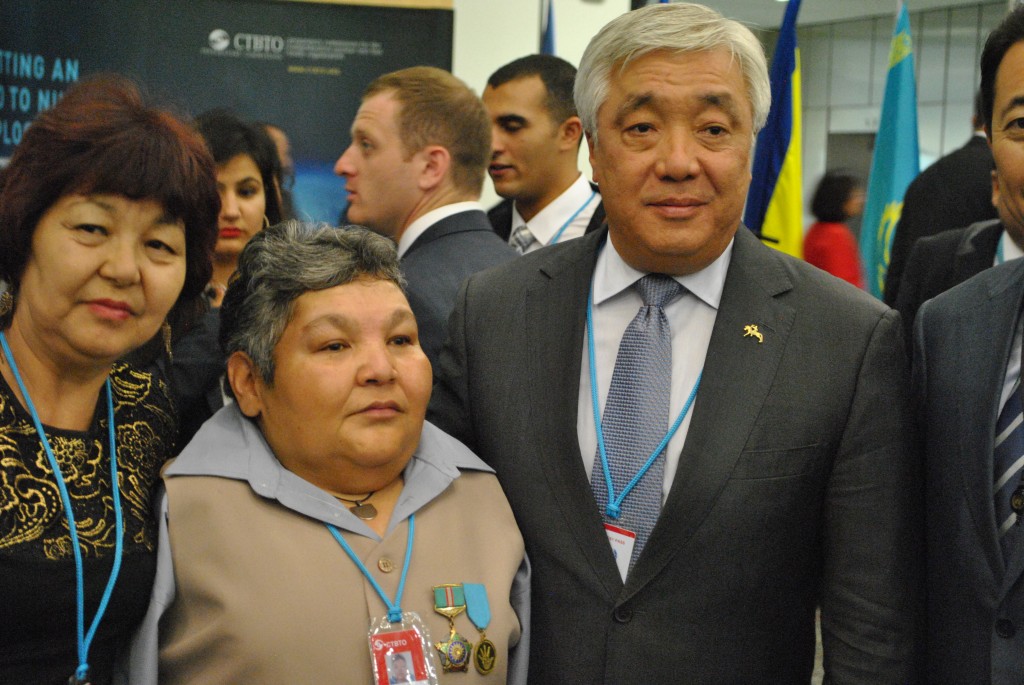 Kuyukov said that this new type of terror demands attention, ensuring the safe decommissioning and disposal of all nuclear weapons for the sake of mankind. Its urgency was underlined with the recent Nuclear Security Summit hosted by U.S. President Barack Obama in Washington, D.C., and attended by 55 world leaders.

“Eradicating nuclear weapons from this earth is not a Cold War relic or a fashion of the 60s and 70s. It is the responsibility of our generation in securing our children’s future and putting an end to the generations of suffering of millions of silent victims,” Kuyukov concluded.

He asked visitors to consider signing The ATOM Project’s petition to global leaders by visiting its website.