Business Centre Head: I Love Astana, I Miss Astana, This Is My Problem

ASTANA – Kaskad Business Centre head Huseyin Sahin is a prominent representative of the city’s medium-sized businesses. The high level of corporate activity in the Kazakh capital attracts businesspeople throughout the world and renting commercial space is considered quite profitable. 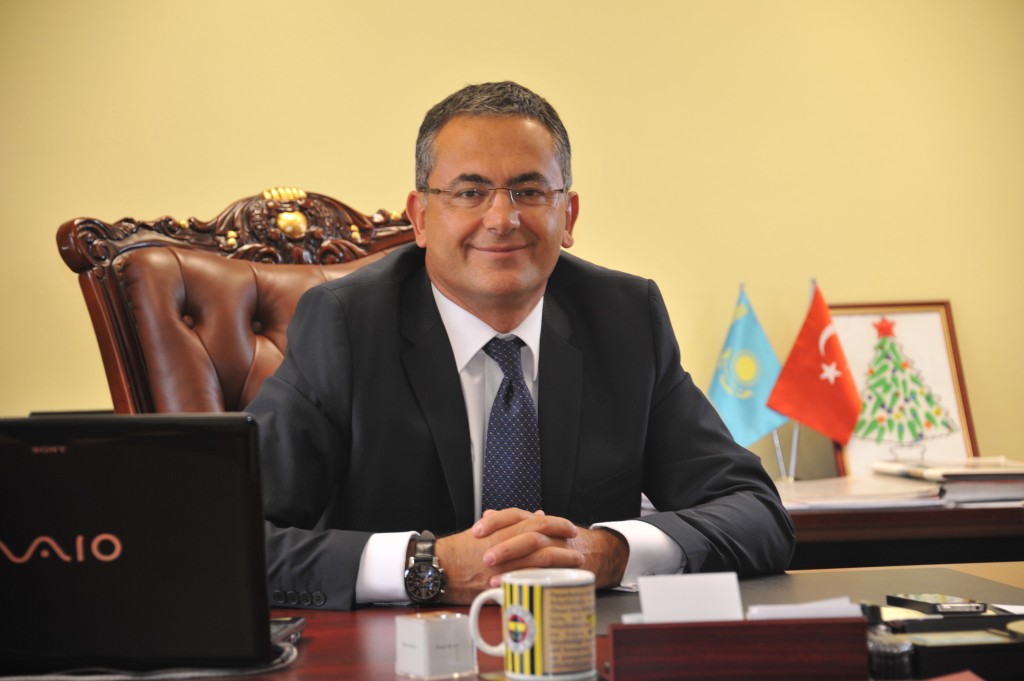 “I studied in Turkey. My specialty is economy, but my background is hotel business. Also, I studied in the USA, attending general manager programmes. I came to Kazakhstan as a member of the Intercontinental [Hotel] opening team in 1998. I can say that my business comes from the hotel field. Of course, you can say what is the connection between hotels and the business centre. Actually, I think that our business is a kind of a hotel, but hotel guests move quickly. Our guests move much more slowly. But we actually provide almost the same services here,” he said.

Kaskad Business Centre is considered one of the best in the city and Sahin noted the most important thing is how its administration solves clients’ problems and takes action: on time or not. Using his experience from the hospitality sector, he emphasised it is crucial to know whether a client is satisfied.

“As for me, the most important subject is a guest. It doesn’t matter, hotel guest or business centre guest.

All our staff members are constantly trained. We have weekly trainings and monthly trainings,” he said.

Sahin, who hails from Istanbul, has been living in Kazakhstan for 18 years. He has no problem residing in his adopted nation.

“Actually when I go to my country I have problems, because I am missing Kazakhstan. This is a problem. My home city is Istanbul, where almost 20 million people live and move. When I come to Astana, I feel that I am on vacation. I have enough free time for myself after work. I go to a gym after 6 p.m. and spend time with my children. The situation is absolutely opposite in a big city, where you have to organise your time very properly. You have to make a choice to go somewhere to spend time with your family. I love Astana. I miss Astana. This is my problem,” he said.

When they arrived in June 1998 Sahin and his team experienced many universal issues, beginning with being a local or an expat.

“In the beginning we had a language problem, as we didn’t know Russian and only few staff members knew English. That is why I am here. I am here to solve problems. The best thing in my work is to see how my staff members grow and get better and better positions. The most important thing for me is to see my staff members at high positions,” he said.

Sahin originally found the capital to be a small city with two major streets, Abai and Republic Avenues, and nothing on the left bank. The Intercontinental, then the tallest building, was the only one visible from the Astana airport.

“Now you can’t see it. I came for two years and I was sure that I would go back after my contract expired, but I have now lived here for 18 years,” he said.

He added he has seen a remarkable evolution in the capital.

“Now in 2016 I can’t say 100 percent, I say 300 percent change in the city, because the population grew up and education greatly improved. People became more educated and highly skilled. They know much more about the world, because they travel and understand what Kazakhstan is and what its mean for the world,” he said.

The Intercontinental was the city’s first five-star hotel.

“People in Astana thought a hotel was just a sleeping place, but my team had to show that a hotel is a great place for many types of activities and a client can spend 24 hours in it. The team showed their guest that a hotel is an enjoyable place,” he added.

He noted Kazakhstan was a “brilliant market” for businessmen in 1990s, as President Nursultan Nazarbayev opened the nation’s doors to all businesspeople.

“As of today, EXPO 2017 is brilliant for businessmen. Businesspeople come to the country and every year you can see that business activity is growing,” said Sahin.

He stressed the significance of providing superior service for his clients.

While Turkey is his motherland, Sahin considers Kazakhstan to be his second home.

“My wife is from Kazakhstan. My kids were born in Astana and all of them have Kazakh passports. We are Kazakh already. I would like to call Kazakhstan people to be more mobile and contributing to their state. I would like to call them to think how they can develop their country, make it better and improve our economy,” he said.

“Also, I want to show our Kazakhstan culture to all visitors of EXPO 2017. People from dozens of states will arrive and we should show them the highest level of services in airports, hotels and restaurants. We should show what Kazakhstan is. Actually, all details are very important. Foreigners will come and they will see our culture, our food and facilities. All of us, I am speaking as a Kazakh, should show who we are and show our positive attitude and the world should see that our state handled EXPO very well and the state and its economy is ready to handle any big function,” he said.