By Aiman Turebekova in International on 14 June 2016

ASTANA – Kazakh Secretary of State and National Commission for Women’s Affairs, Family and Demographic Policy Chair Gulshara Abdykalikova made a working visit to Warsaw to take part in the Global Summit of Women. The conference was attended by delegations from 75 countries, according to a press release from the Kazakh President’s press service. 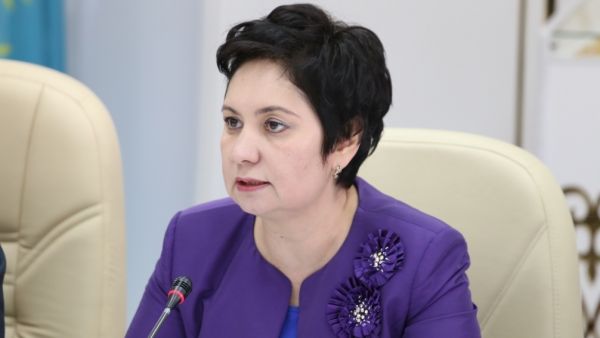 For more than 23 years, the summit has been connecting women worldwide and covering all sectors – public, private and non-profit.

Speaking at the conference, Abdykalikova noted Kazakhstan offers all the development conditions for a modern, inclusive economy by implementing state programmes such as Business Road Map 2020 and Employment Road Map 2020, as well as joint projects with the European Bank for Reconstruction and Development and Asian Development Bank. Inclusive economic growth is not only about expanding national economies, but also about ensuring the reach extends to the most vulnerable in society.

In her speech at the ministerial roundtable, the Secretary of State noted Kazakh President Nursultan Nazarbayev has set the task of entering the top 30 most developed countries of the world. In order to achieve this ambitious goal, large-scale institutional reforms have been implemented, including in areas of accountability of the state, the rule of law, economic diversification and development of human capital.

Abdykalikova indicated these measures have allowed Kazakhstan to increase women’s participation in the economy. The proportion of women in business has reached 50 percent, 42 percent of whom run small and medium-sized businesses. The level of female unemployment declined from 9.2 percent in 2006 to 5.6 percent in 2015 and the gender wage gap reduced from 62 percent [of the average wage for men] in 2006 to 67 percent in 2015. In 2015, Kazakhstan took 25th place in the Global Competitiveness Index indicator “Working women, the Proportion in Relation to Men.”

The Secretary of State used the opportunity to meet with Polish Prime Minister Beata Szydlo and discuss topical issues of Kazakh-Polish relations. Abdykalikova stressed Poland is an important partner and thanked the country’s leadership for supporting Kazakhstan’s accession to the World Trade Organisation, as well as Poland’s official confirmation to participate in the upcoming EXPO 2017 in Astana.

Abdykalikova also held talks with Elżbieta Rafalska, Poland’s Minister of Economy, Labour and Social Policy. They discussed a number of issues, including the need for an exchange of experience regarding social protection and gender policies.

In a session with Agata Kornhauser-Duda, Abdykalikova thanked Poland’s first lady for the excellent organisation of the summit and emphasised the importance of successfully developing educational cooperation between the countries. More than 500 Kazakh students are currently studying in Poland.

The Secretary of State also met with the heads of the French, German, Malaysian and Vietnamese delegations. Vietnamese Vice President Dang Thi Ngoc Thinh spoke about a free trade agreement between her nation and the Eurasian Economic Union (EAEU), adding it would open new cooperation opportunities for the two countries, as well as for Vietnam and other EAEU nations.

Abdykalikova participated in the conference’s June 11 closing ceremony and invited participants to visit EXPO 2017, adding a women’s forum under the auspices of the Global Summit of Women is planned during the exhibition. She called on women leaders from around the world to join the discussion of innovative ideas and advanced technologies in the field of green economy.