ASTANA – A press conference dedicated to the premiere of the Russian movie “Tak slozhilis zvezdy” (That’s the Way the Stars Aligned) was held in Moscow on May 17. During the press conference, the Ministry of Culture and Sports of Kazakhstan and the Union of Cinematographers of Russia signed a memorandum on cooperation in the field of cinematography. It sets out the basic activities that will guide cooperation between the two departments, according to the Kazakh ministry’s press release. 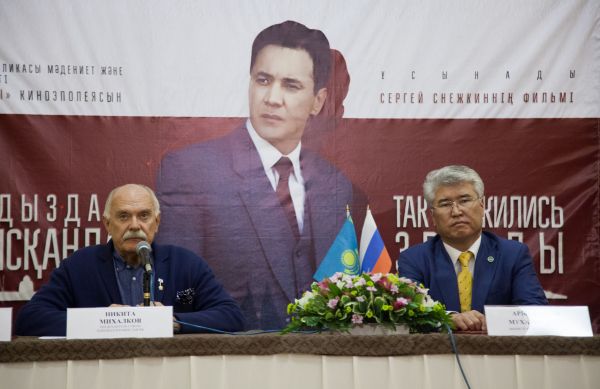 “In Kazakhstan, there is a huge number of talented people, full of energy and temperament. And they have that Kazakh powerful spirit, which is strong, muscular, fun and adventurous,” said Chairman of the Russian Union of Cinematographers and Oscar-winning director Nikita Mikhalkov during a press conference.

He also called for continued cooperation, which is based on cultural memory.

“We are close, despite confessional differences, despite the boundaries. Today, 80 percent of people involved in filmmaking in the CIS (Commonwealth of Independent States) countries and Central Asia studied at the Gerasimov Institute of Cinematography, our acting school. All these people are in one way or another connected with the multinational culture of our country. I hope that today we will begin the cooperation between our common cultures, no matter what language we speak,” said Mikhalkov, addressing specific cultural and friendly relations between Kazakhstan and Russia.

Kazakhstan and Russian plan the establishment of the Eurasian Film Academy, which would establish a prize, an analogue of Oscar, which would contribute to the development of cinema for communication.

In his speech, Minister of Culture and Sports of Kazakhstan Arystanbek Mukhamediuly noted that the two countries’ cinema art is connected by long-term, close cooperation based on the historical commonality.

“Kazakhstan is honoured that today we can sign a memorandum. We want our cooperation system to be systematic, to be written in laws. We are honoured that in the complicated 1940s, famous studios Mosfilm and Lenfilm were based in Almaty,” he said.

According to him, the countries must work closely, because two years ago Kazakhstan, Russia, Belarus, Armenia, and Kyrgyzstan joined the Eurasian Economic Union.

“It really came true. It was the right step in difficult times. Of course, we want our cooperation in the field of cinema and art to have worthy continuation. We already have some works that we will be happy to introduce to you. Soon we plan to present a movie about Panfilov’s guardsmen. We are happy to take part in the Yalta and Moscow international festivals,” added Mukhamediuly.

Also during the meeting, it was added that this year events such as a week of Russian movies in Kazakhstan will resume.