By Malika Orazgaliyeva in International on 23 May 2016

The Kazakh delegation took an active part in the recent events convened in Brussels, Belgium and Berlin, Germany, where it promoted better dialogue with the European Union and connectivity projects on the Eurasian continent. 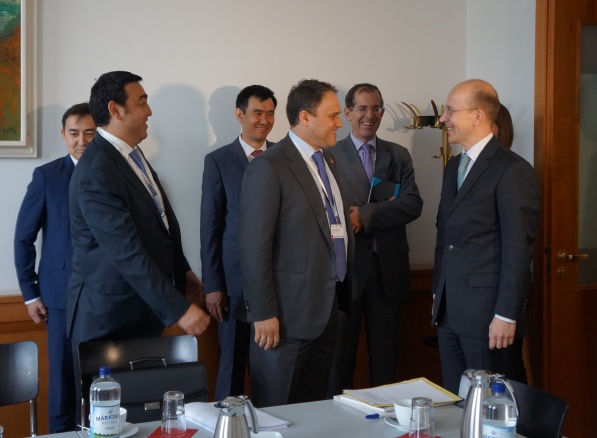 According to a Kazakh Ministry of Foreign Affairs press release, the participants exchanged views on a number of key issues of mutual relevance, including counter-terrorism, border management, migration and regional connectivity and ways to further enhance concrete cooperation in these areas.

During its existence, security dialogue in the EU-Central Asia format has become an effective platform to discuss mutually significant political and security issues. Participation by Afghan representatives provided the opportunity to consider the regional situation in a broader context and discuss joint efforts of Central Asian countries, the EU and Afghanistan to create conditions for the country’s sustainable development.

“We are convinced that the development of the situation in Afghanistan will largely depend on the degree of involvement in the reconstruction process of both the neighbouring states and the EU. We look forward to the outcomes of the conference on Afghanistan scheduled for this autumn. We hope the EU and its member states will make a significant financial and practical contribution to the further development of Afghanistan,” said Vassilenko in his remarks. “We propose establishing a communication channel for the rapid exchange of information on the situation in the whole region and in Afghanistan in particular.”

Officials from Kyrgyzstan, Tajikistan, Turkmenistan and Uzbekistan also attended the meeting. As per last year’s dialogue in Dushanbe, Afghan officials were invited to participate.

The meeting also served as preparation for the upcoming Brussels Conference on Afghanistan, planned for Oct. 5.

The Berlin Business Conference, held May 18-19, was organised by the Organisation for Security and Co-operation in Europe (OSCE) German chairmanship. Kazakh OSCE permanent representative Ambassador Kairat Sarybai and Kazakh Ambassador to Germany Bolat Nussupov, as well as representatives of national companies, joined the country’s delegation.

During the Connectivity for Commerce and Investment session, the conference’s final, Vassilenko spoke about the main priorities of Kazakhstan’s policy in making the effective use of the country’s geographic location in the centre of Eurasia. 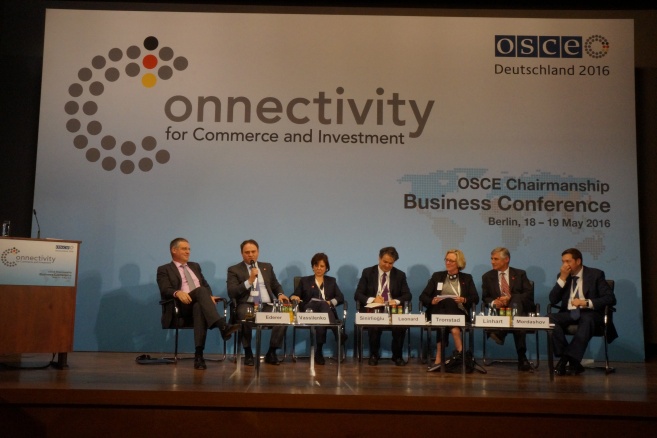 “Our country and region are increasingly being seen not as landlocked but as land-linked, a connecting bridge between continents, cultures and trade. Playing our full part in strengthening this economic connectivity is a top priority for Kazakhstan, both in our national policies and in our partnerships with other countries,” he said.

At the meeting, Vassilenko presented prospects for mutual connection and conjunction of various integration initiatives and infrastructure development programmes, including the Silk Road Economic Belt and Eurasian Economic Union (EAEU). He focused on developing transport and transit opportunities in the region, including harmonious links among projects such as Nurly Zhol, Kazakhstan’s programme of infrastructure development, and the Western Europe-Western China international road corridor.

“In the three years between 2015 and 2017, Kazakhstan will have invested 9 billion U.S. dollars of our own money [under the Nurly Zhol programme] to develop major transport projects. We are, for example, accelerating the establishment of a logistics hub in the east and maritime infrastructure in the west of the country,” he said referring to the Khorgos dry port on the border with China and the Aktau sea port on the Caspian Sea.

Dialogue and long-term economic cooperation should also be established between the EAEU and EU, he added bringing up President Nursultan Nazarbayev’s initiative, discussed earlier this year with European Commission President Jean-Claude Juncker.

Vassilenko invited interested companies to join Kazakhstan in implementing important developments. He noted Kazakhstan is eager to see the involvement of European companies across the second phase of industrialisation and privatisation of its economy. In this context, he stressed the country has advanced favourable conditions to encourage foreign participation.

They noted that the proposed slogan of the Austrian chairmanship, “Greening the Economy, Building Partnerships” is very much in tune with the priorities of Kazakhstan’s foreign policy and the concept of the upcoming international specialised exhibition EXPO 2017. In this context, the sides discussed in detail the possibility of bringing together the two countries’ efforts next year, including in terms of organising an Austrian chairmanship event on the platform of EXPO 2017 on the development of alternative energy sources and improving energy security.