By Aiman Turebekova in International on 6 May 2016

ASTANA – Kazakh President Nursultan Nazarbayev met May 5 at the Akorda with Poland’s Marshal of the Senate Stanisław Karczewski, where the parties discussed prospects of economic, investment and inter-parliamentary cooperation, reported the President’s press office. 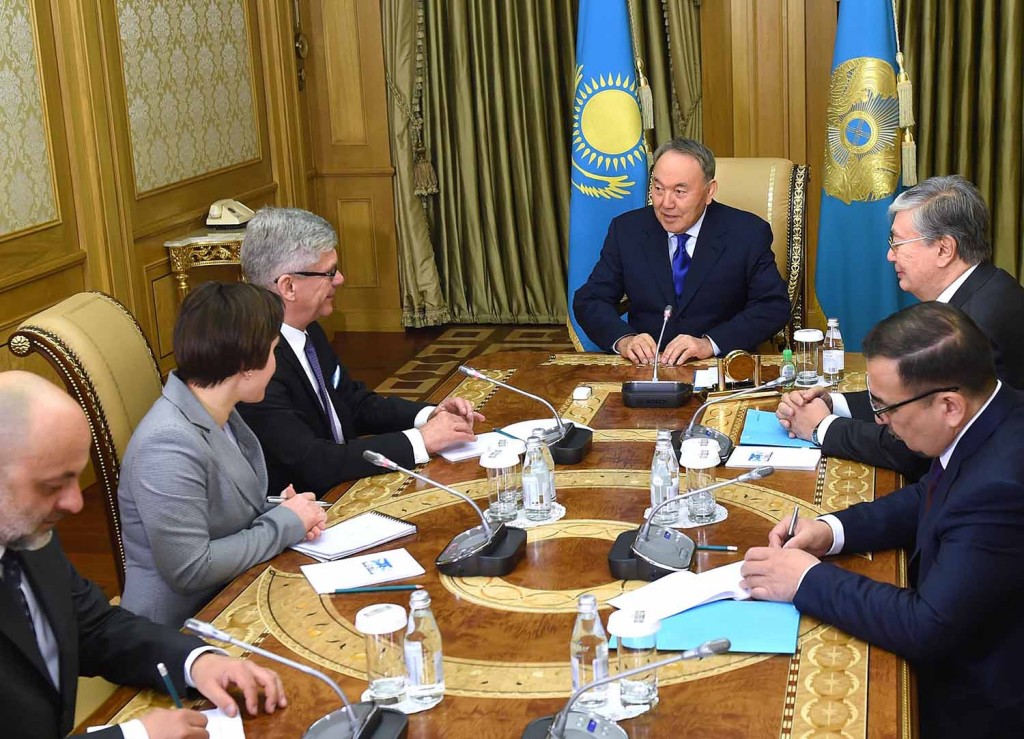 “We have a great respect for what is being done in Poland. Your country is one of Europe’s leaders in terms of development and we want to have close political relations with Warsaw,” said Nazarbayev.

He added that last September, on the margins of the 70th session of the UN General Assembly, he conferred with Polish President Andrzej Duda when the latter invited Nazarbayev to visit his country.

“I hope that this visit will become a new point in further deepening our good and friendly relations,” said the Kazakh President.

Karczewski thanked the head of state for his contribution in developing bilateral cooperation and noted the Polish government is preparing for the Kazakh leader’s visit to Warsaw.

Tokayev and Karczewski agreed to continue the inter-parliamentary discourse and interaction between the upper chambers of the two parliaments. The parties also noted their nations’ similar approaches on regional and global security.

“Poland is one of the most developed states of Eastern Europe and has a great potential. Kazakhstan is interested in further fruitful development of bilateral cooperation. President Nursultan Nazarbayev personally did much to strengthen the mutually-beneficial relations between the two countries, whether in the field of political dialogue or trade, economic and cultural fields. Our task is to continue working in this direction,” said Tokayev.

“We fully share the President’s opinion which is expressed in the manifesto, that only peace and disarmament can positively influence the attitudes of the world,” he said.

In addition to the meetings between Nazarbayev and Karczewski, the visit included meetings with Mazhilis (lower house of Parliament) Chairman Baktykozha Izmukhambetov and Assembly of the People of Kazakhstan (APK) Deputy Chair Yeraly Tugzhanov at the Palace of Peace and Reconciliation. As part of the visit, the Polish delegation is also to go to Taraz to visit the graves of the Polish soldiers who died in the south of Kazakhstan during World War II as they were preparing to form the so called Anders Army to fight the Nazis and Kokshetau where they will meet with the ethnic Poles leaving in the area.

Most Poles living in Kazakhstan are descendants of those deported from Central Ukraine in the 1930s-40s. During this difficult period, Kazakhstan became a homeland for peoples who suffered from the totalitarian regime of the Soviet government. Karczewski expressed his appreciation in a letter penned to Tokayev on March 1, the Day of Gratitude celebrated in the nation for the first time this year.

“Paying tribute to our compatriots and their suffering, we would like to express our gratitude to the Kazakhs, who in difficult times accepted them as brothers,” he wrote.

Poland’s trade turnover with Kazakhstan accounts for 70 percent of Poland’s total with Central Asian countries. Bilateral trade by the end of 2015 amounted to $1.13 billion with Kazakh exports amounting to $789.2 billion, and imports reaching $340.8 billion, according to the Kazakh Agency of Statistics.