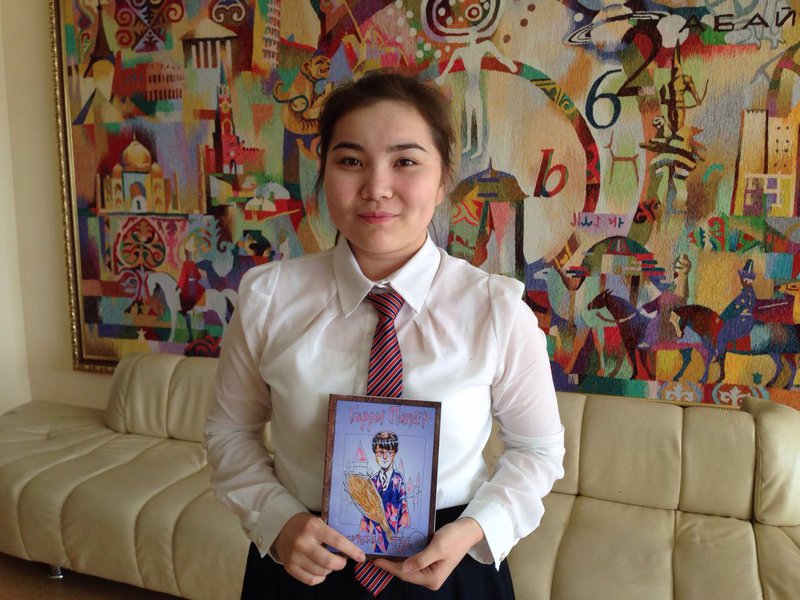 “During the translation, I faced a lot of problems,” Seitenova said in an interview on Kazakh TV. “It was too hard to translate from the original language into Kazakh. And of course, my English teacher Akbota [Abisheva] helped me. Many of my friends are really interested in [this project] and in such an attractive cover. It does attract people as it is very nice.”

According to the 10th grader this project took her three months and drew much hype among the people. She is planning to continue her work and will translate other books of the series in the future with the help of her English teacher.

“We were translating from the original language into Kazakh,” Abisheva said. “It was a difficult job. During the process, we learned spoken English, compared it with the Russian translation and then created the text in Kazakh. Our main goal was popularisation of the Kazakh language among foreign students and colleagues, who want to learn Kazakh. We thought the world best-seller will be especially interesting in the learning process.”

Currently her translation of “Harry Potter and the Philosopher’s Stone” can be downloaded from the Internet. Another NIS student Olzhas Yessenbayev helped with filling in creative content and graphics.

Both school students are not after fame or money, but are only interested in promoting the Kazakh language.