WASHINGTON, DC – Although four nuclear security summits held at U.S. President Barack Obama’s initiative since 2010 have produced a remarkable legacy in strengthening the security of dangerous materials around the world, more remains to be done to make mankind safer in the face of the threat of a nuclear apocalypse, Kazakh President Nursultan Nazarbayev said April 1 in Washington. 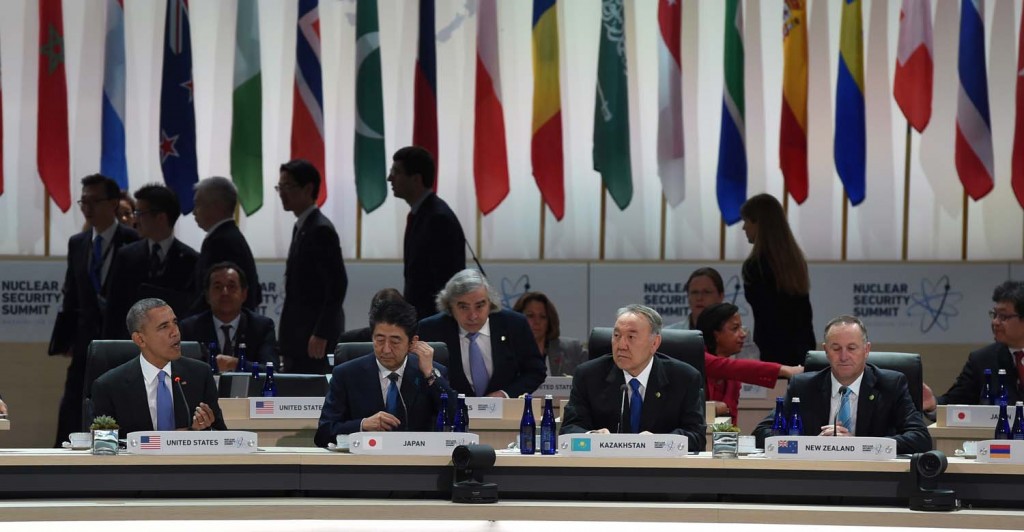 “We believe the holding of nuclear security summits should continue. This is the only way we can change the world, leaving a safer planet for future generations,” the Kazakh leader told international leaders who gathered for the fourth Nuclear Security Summit in the U.S. capital on March 31 – April 1. He stated his country’s readiness to help progress work in this direction by hosting a summit.

Nazarbayev was among the more visible figures at the gathering of more than 50 world leaders, as well as heads of the United Nations, the International Atomic Energy Agency, Interpol and other major international organisations.

Nazarbayev, as head of a country with one of the more robust records in advancing nuclear security and disarmament, was privileged to be among the early leaders to be given the floor at the summit’s opening session.

In his remarks, Nazarbayev drew the attention of the participants to the fact that Kazakhstan is among the top 20 countries with the highest level of security of nuclear facilities and materials. 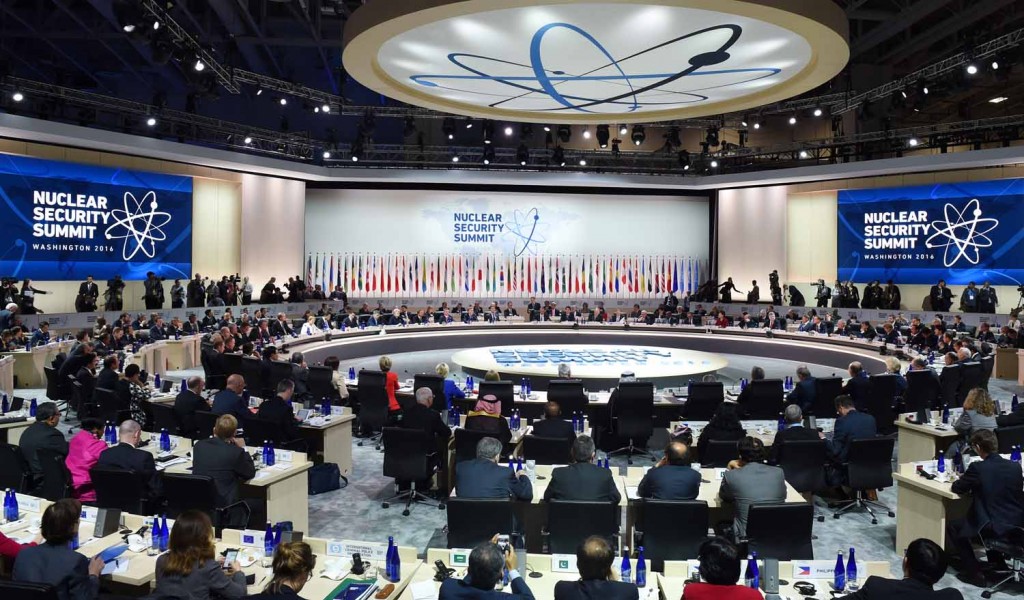 “We have implemented a set of measures to ensure physical nuclear security at the national level. Our export control system of nuclear materials has recently been strengthened further. We are working on the establishment of a Nuclear and Radioactive Materials Identification Centre. Research reactors at the Institute of Nuclear Physics in Almaty have been switched to low-enriched fuel. A similar project at the National Nuclear Centre will be fast-tracked. All our nuclear facilities are under the comprehensive oversight of the IAEA,” Nazarbayev said at the event.

According to a transcript of his remarks released by the Akorda’s press service, he stressed that today Kazakhstan is the world’s largest producer of uranium ore and is determined to play its part in the global technological chain of nuclear fuel production for peaceful use. That is the reason why the country is working with the IAEA on the establishment of a Low Enriched Uranium (LEU) Bank under the organisation’s auspices.

Nazarbayev noted that, having relinquished the stockpile of nuclear weapons it inherited from the former Soviet Union in the early 1990s, Kazakhstan continues to lead efforts to reduce their numbers around the world.

According to him, a world without nuclear weapons should become the main goal of mankind in the 21st century. 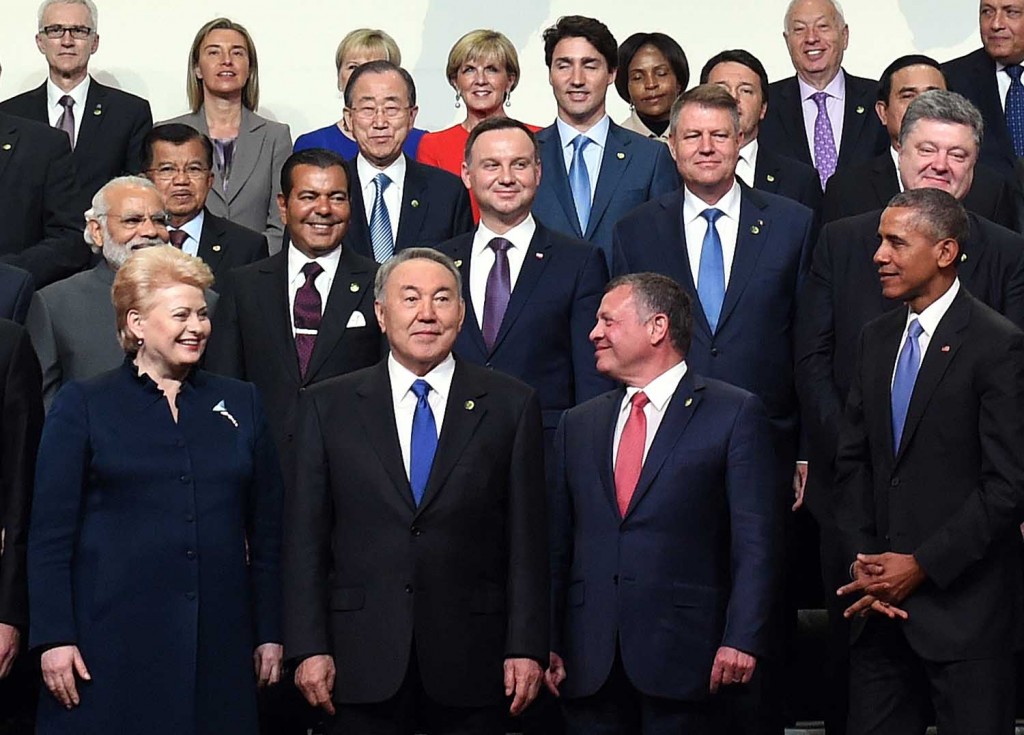 “People of Kazakhstan know the disastrous costs of the military atom. There are still tens of thousands of people suffering from diseases caused by radiation. There are 1.5 million hectares of radioactively contaminated soil. Even today, the soil contains plutonium – 239,100 times more than the norm and the concentration of tritium in waters is 40-times higher than the average. We seek the expansion of systematic international support on the rehabilitation of our people’s health and the decontamination of land and water at the former [Semipalatinsk] test site,” Nazarbayev informed.

“By shutting down the Semipalatinsk Test Site [in 1991], we wrote a new chapter in global anti-nuclear history. This year marks the 25th anniversary of that decision. Let me invite to the commemoration of this anniversary the leaders of the P5 nations, the guarantors of the nuclear weapon-free zone in Central Asia and high-level delegations from the countries that share our goal of achieving a world free from the threat of nuclear destruction,” he added.

On the same day, 18 nations issued a joint statement welcoming the establishment of the IAEA LEU bank in Kazakhstan. Leaders of Canada, China, the Czech Republic, Finland, France, Germany, Hungary, Japan, Jordan, Kazakhstan, Norway, the Philippines, the South Korea, Spain, Sweden, the UAE, the United Kingdom and the United States approved the announcement.

The joint statement highlighted the IAEA LEU bank in the eastern Kazakh city of Ust-Kamenogorsk as part of a global effort to create an assured supply of nuclear fuel to countries in case of disruptions to the open market or other existing supply arrangements for low enriched uranium.

The document noted the significant progress that has been made over the past year towards establishing the IAEA LEU bank, particularly the signature of the agreement between the IAEA and Russia for the transit of nuclear fuel for the bank and equipment to Kazakhstan through Russian territory in June 2015, as well as the signing of the host state agreement between IAEA Director General Amano and Kazakhstan’s Foreign Minister Erlan Idrissov on Aug. 27, 2015. 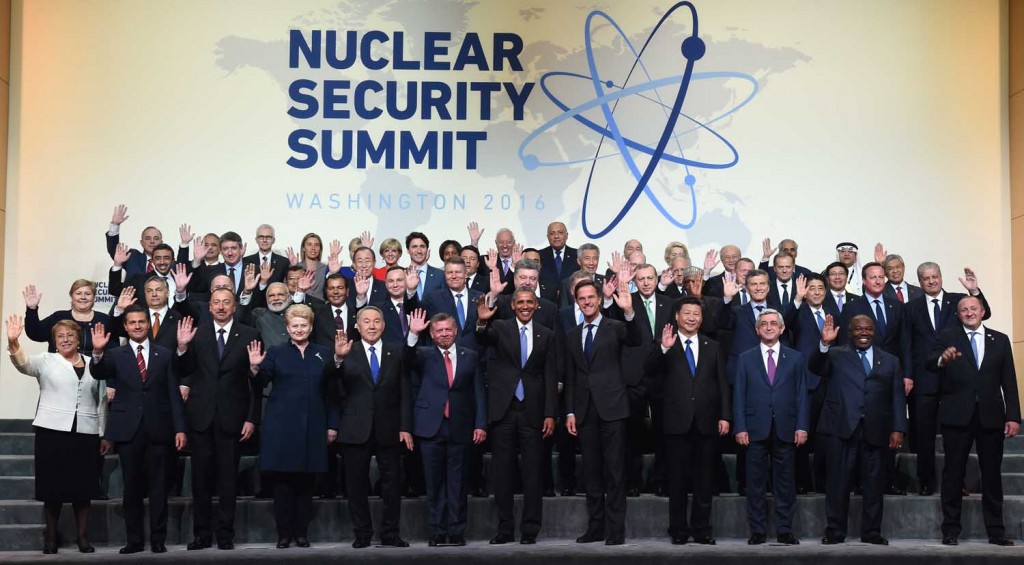 Nazarbayev also used the gathering in Washington to discuss nuclear security, along with bilateral matters, with fellow leaders in attendance.

At a meeting with Prime Minister of Japan Shinzo Abe, Nazarbayev noted that Japan is a partner of Kazakhstan in many areas, praising Japan’s long-standing record of assistance in the rehabilitation of the victims of the Semipalatinsk Test Site. The sides agreed that during Nazarbayev’s visit to Tokyo this fall, a special plan on the development of bilateral economic cooperation in different sectors would be adopted.

Following the meeting, the two leaders issued a joint statement on achieving the early entry into force of the Comprehensive Nuclear-Test-Ban Treaty (CTBT). The two nations co-chair the Ninth Conference on Article XIV Conference on CTBT and the document echoed a similar call made following Abe’s latest visit to Astana last October.

“We welcome the fact that the CTBT has achieved near universal adherence with signature by 183 States and ratification by 164 States as of today, and urge all states that have not yet done so to sign and ratify the treaty as early as possible. In particular, we urge the remaining eight Annex 2 States, whose ratification is necessary for the entry into force of the CTBT, to sign and ratify the treaty without further delay and without waiting for others,” the statement said.

“Pending the entry into force of the CTBT, we call upon all states to continue the moratorium on nuclear weapon test explosions, the process on which the closure of the Semipalatinsk test site in August 1991 had positive impact,” it noted.

The Kazakh-Japanese statement deplored North Korea’s nuclear tests in 2006, 2009, 2013 and 2016 in clear violation of its international obligations and urged Pyongyang to refrain from conducting further nuclear tests. It strongly urged the North Korean government to fully comply with the relevant United Nations Security Council resolutions, including the most recent resolution (UNSC/RES/2270) and the Joint Statement of the Six-Party Talks issued on Sept. 19, 2005 and to take concrete steps towards denuclearisation.

“The summits carried out at the initiative of the U.S. President have brought significant benefits… Today [however still] there remain a large number of nuclear weapons in the world, which are enough for destruction of the entire planet many times over. Therefore, the issue of disarmament determines our future and the future of our descendants,” Nazarbayev said at a briefing for Kazakh media following main discussions at the summit

He added that every two years, thanks to the summit, the heads and representatives of more than 50 countries have come together to address the most pressing issues of nuclear security.

“As a result of such negotiations, decisions are made within the framework of the UN. Every state has an opportunity to talk about the measures taken in this sphere. The next such meeting could be held in Kazakhstan in view of the fact that our country closed the test site and abandoned one of the largest nuclear arsenals,” Nazarbayev noted.

In earlier remarks delivered at the Washington-based Carnegie Endowment for International Peace, Nazarbayev underlined that the practical result of the six-year process of the Nuclear Security Summits helped freeze the threat of a nuclear collapse for the second year in a row as the Doomsday Clock, a symbolic measure used by scientists to imagine proximity of a nuclear war threat, remained in the same position. However, there are serious negative tendencies too, of which Nazarbayev gave a few frightening examples.

“The [Comprehensive] Nuclear Test Ban Treaty has not yet entered into force. The testing of nuclear weapons and missiles is happening on the Korean peninsula. A number of politicians publicly discuss who can ‘wipe others into nuclear dust’ and who can ‘strike first.’ Many have started to quickly forget a simple truth: In the nuclear age, no one will win a global war. All will lose, because our planet will be destroyed! Humankind’s central task should be to become a world free from the threat of war as a means of interstate relations. This is the only way we will ensure a breakthrough in promoting genuine and sustainable nuclear security of the planet,” Nazarbayev stated.

In this respect, Nazarbayev announced the publication of a special manifest, in which he proposed to adopt a comprehensive programme “The 21st Century: A World without War,” that was been distributed at the event and was placed in Russian on the Akorda’s official website on April 2.

Among a number of proposals, which in the author’s opinion, can help humanity curb the nuclear war threat, the manifest suggests adapting a regime of non-proliferation and disarmament to contemporary conditions by including into the so-called nuclear club all de jure and de facto nuclear states. This would help avoid the treatment of many international decisions adopted these days as only favouring the five UN Security Council permanent members who created nuclear arsenals ahead of others and also encourage all of them to take parallel steps to advance the actual cutting of their nuclear weapons stockpiles and not limit non-proliferation as has been the case for nearly two decades now.

Nazarbayev has also called for legally prohibiting the creation of new weapons of mass destruction resulting from new scientific discoveries and for developing an international convention for the purpose.