Nazarbayev: Constructing World without Nuclear Weapons Would be Act of Supreme Wisdom

By Aiman Turebekova in International on 2 April 2016

ASTANA – “Construction of a world without nuclear weapons must be the main goal of humanity in the twenty-first century,” said Kazakh President Nursultan Nazarbayev at the Carnegie Endowment for International Peace in Washington D.C. He was in the American capital to attend the fourth and final Nuclear Security Summit. 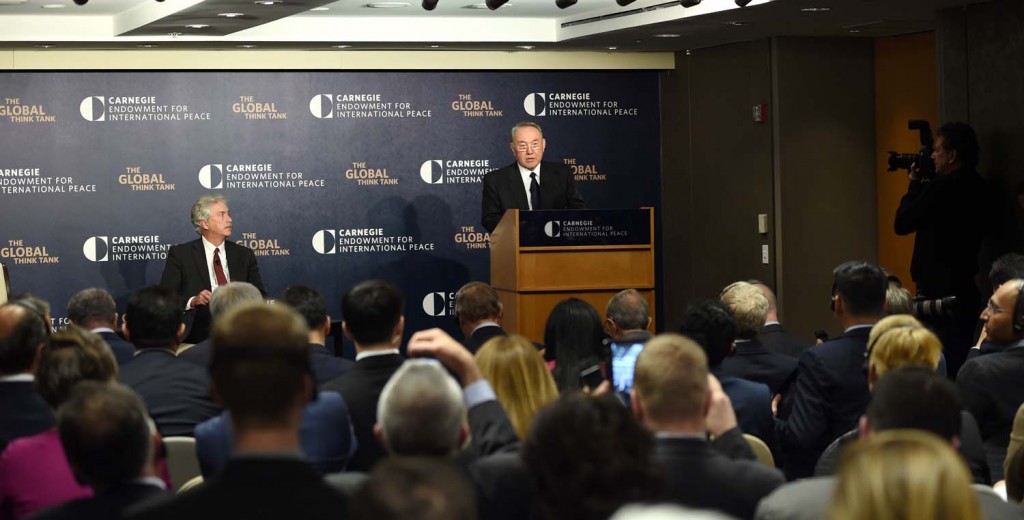 During the visit, Nazarbayev outlined his vision for a secure nuclear future, with special focus on the Comprehensive Nuclear Test Ban Treaty (CTBT), the role of the International Atomic Energy Agency (IAEA) Low-Enriched Uranium (LEU) Bank and his nation’s contributions to international efforts to curb nuclear terrorism.

Since the Nuclear Security Summit in 2014, Kazakhstan has taken a set of practical steps to strengthen nuclear security, non-proliferation of nuclear weapons and peaceful use of atomic energy. Nazarbayev shared some of the results of the country’s achievements at a meeting with analysts, diplomats and politicians, drawing attention to the phenomenon that lack of trust between players has become a primary cause of global security crises.

“I am deeply convinced that a path to a fair, transparent, multi-polar world order is meaningful only through participation of all countries in discussions and searching for political rather than military solutions to global problems,” said the Kazakh leader.

The President added adoption of the United Nations (UN) Universal Declaration on the Achievement of a Nuclear-Weapon-Free World is a new and important step towards achieving this goal.

“I believe that the document, which is enshrined in general principles and obligations on nuclear disarmament and supported by the international community, is able to become a bridge between different views in order to build a future world without nuclear weapons,” he said.

Kazakhstan is known as the world’s largest producer of uranium. In August, the country signed an agreement with the IAEA to establish the agency’s LEU Bank. According to media reports, Kazakhstan will finalise construction of a storage facility in 2017, meeting all applicable IAEA safety standards for LEU storage and the corresponding documents for nuclear security recommendations.

Nazarbayev noted Kazakhstan also chose to relinquish thousands of nuclear weapons and tonnes of nuclear material remaining on its territory after the Cold War and closed the Soviet nuclear testing site at Semipalatinsk.

“The Kazakhs, who have experienced all the deadly force of nuclear weapons, understand the deeply-humanitarian consequences of its application. That is why we tirelessly continue to exert all efforts in the field of nuclear disarmament and non-proliferation, which are based on a simple, but solid imperative: the world should and can become safer and more stable,” he said.

In addition to Kazakhstan’s record on non-proliferation, Nazarbayev briefed the audience on the 100 Concrete Steps Plan of the Nation and Nurly Zhol, the Path to the Future programmes of economic, social, and judicial reforms.

“The plan provides a new vision of Kazakhstan in the 21st century with a more balanced political system, developed institutions of civil society and knowledgeable economy,” he said. 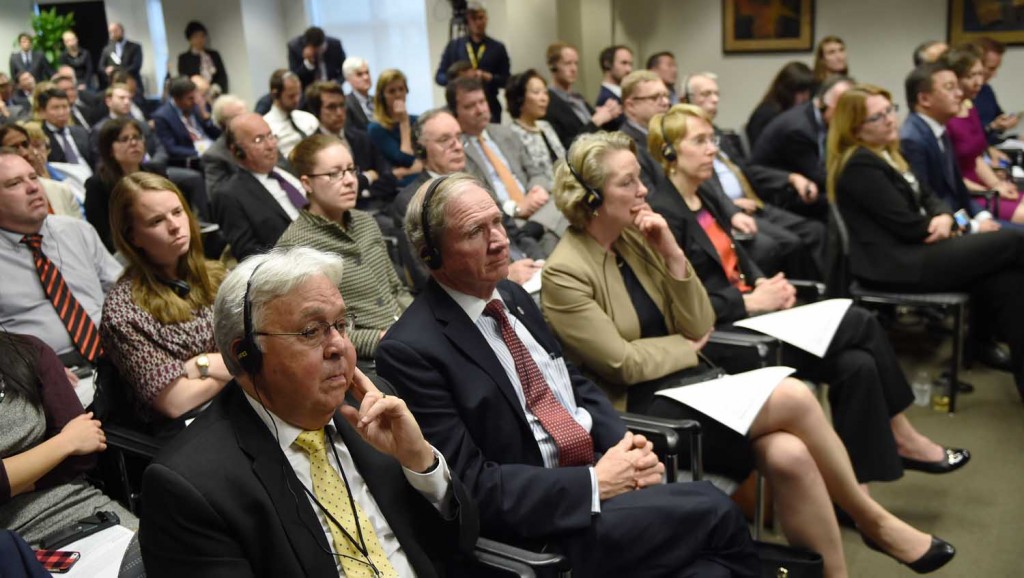 He added he believes one of the main causes of the current world crisis is the deep flaws that persist in global economy and finance.

“Four years ago, we launched a G-Global initiative aimed at uniting the efforts of all countries in combating the [Global Financial] crisis. Global development issues should be solved not by eight or 20 states, but the entire international community. Developed in the framework of G-Global on the site of the Astana Economic Forum, the world anti-crisis plan has received widespread support,” he said.

Nazarbayev indicated Kazakhstan has advanced its candidacy as a non-permanent member of the UN Security Council for 2017-2018 and is counting on support from the international community. He also shared his vision of development prospects in the Eurasian region.

“The Eurasian region is a key geo-economic and geopolitical factor in world politics. It crosses the interests of all the global players such as China and Russia, the U.S. and the EU (European Union), India, Iran and Turkey. It is important to guide regional processes in a constructive direction by reducing potential conflicts in the region through enhanced cooperation and integration. That is why I proposed establishment of the joint Eurasian economic space,” he said.

Addressing the participants, the head of state thanked the endowment and its current head, Ambassador William J. Burns, for organising the dialogue platform, noting the institution has made a significant contribution in the development of international relations for more than a century.

Furthermore, Kazakhstan and the U.S. have confirmed a shared commitment implementing practical measures to strengthen the nuclear non-proliferation regime and enhance nuclear security.

According to a joint announcement released March 31 by the two presidents’ press offices, the U.S. welcomes Kazakhstan’s activities to strengthen nuclear security and implement decisions of the Washington, Seoul and Hague Nuclear Security Summits.

The parties also announced the successful elimination of all fresh highly enriched uranium (HEU) from Kazakhstan’s WWR-K research reactor by down-blending the material at the nation’s nuclear fuel factory. The action emphasises Kazakh commitments to return the HEU spent fuel to the Russian Federation as soon as possible, thereby eliminating all HEU from the Institute of Nuclear Physics (INP) facility.

The parties are pleased with the joint efforts to establish the Nuclear Security Training Centre (NSTC). The centre will offer training in nuclear non-proliferation, material protection, control and accounting and countering the illicit trafficking of nuclear and other radioactive materials. Construction began in late 2015 and the centre will be operational by the end of the calendar year. 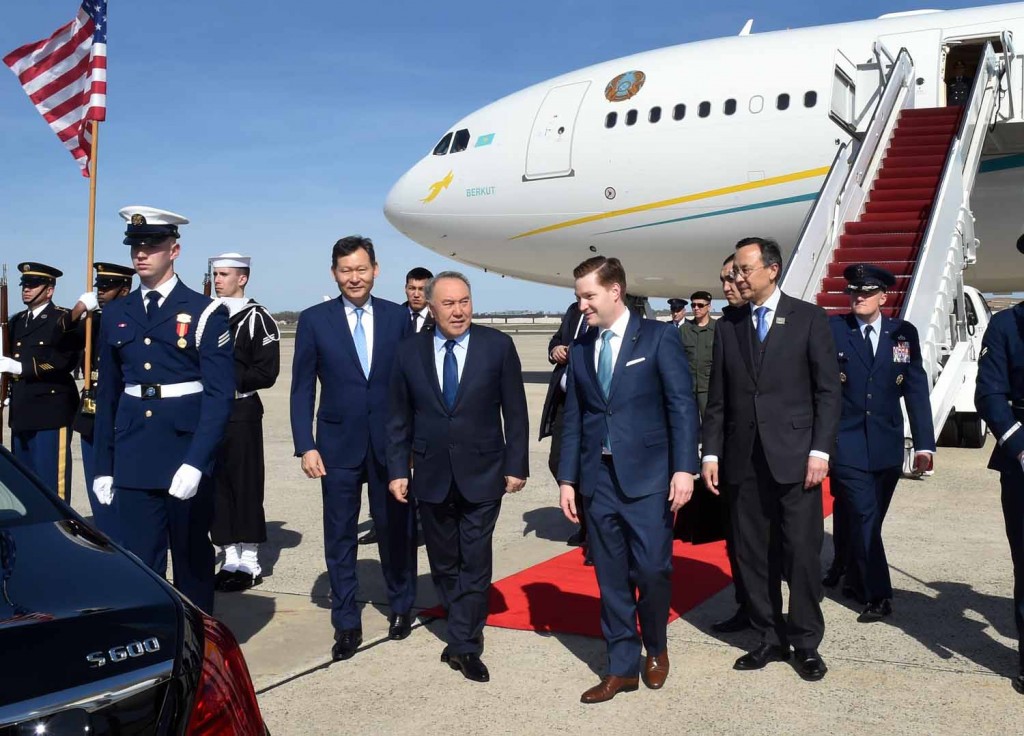 Nearly fifty heads of state gathered in Washington for the inaugural summit in March 2010, the largest meeting of world leaders since the founding of the UN. By focusing high-level attention on the threat of nuclear terrorism, Nuclear Security Summits were designed to energise, enhance, empower and elevate the many existing multilateral and cooperative institutions and structures aimed at securing nuclear materials and preventing nuclear smuggling.

Kazakhstan welcomed President Barack Obama’s initiative on the Nuclear Security Summits since 2009 as timely and relevant, according to a March 31 Akorda press release.

“The Republic of Kazakhstan and the United States of America attach importance to the Nuclear Security Summit process, underlining the importance of continued efforts aimed at strengthening nuclear security as well as ongoing collaboration between the parties on issues related to strengthening the nuclear non-proliferation regime,” read the announcement.