By Zhanna Shayakhmetova in Nation on 7 April 2016 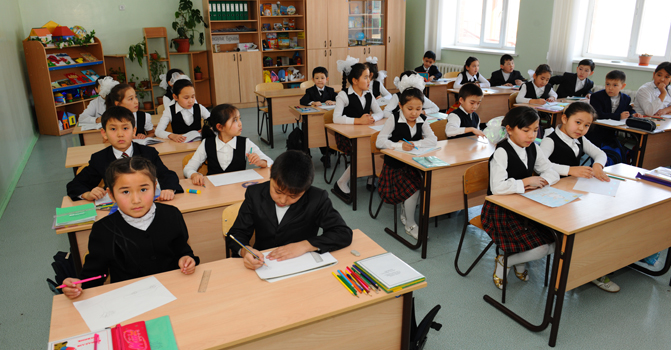 ASTANA – Beginning in September, Kazakhstan will change from a six to a five-day school week. The school year for first graders will last from Sept. 1 to June 1.

The change was originally planned for 2017. Students in second, fifth, seventh and ninth grades will move to a five-day week beginning September of that year, while other students will convert to the new schedule starting in September 2018, reported Tengrinews.kz.

The transition is related to the curriculum update, with the new programmes to be based on those of the Nazarbayev Intellectual Schools. Educational programmes will be created on the basis of functional literacy development in accordance with the world’s best practices.

The Ministry of Education and Science has been considering the possibility of accelerating a nationwide transition to a five-day school week.

“However, it is necessary to thoroughly carry out calculations to update the content of programmes and consider schools with three-shift training in order to solve this issue. We understand that the beginning of summer holidays will shift to a later date for two weeks. The quality and amount of the entire educational process remain essential,” according to a Ministry of Education and Science press release.

“I am pleased for the parents and our children, as the school assignment has quite a strong effect on children’s health and they do not have time to recover in one day. It is expected that children will be able to develop fully on weekends. For example, they will be able to attend language courses or sport classes. Besides, children receive the necessary knowledge at home, too. Children should have time to communicate with their families and be introduced to family traditions. Saturday also will be an important day for the training of teachers,” said Nazarbayeva.

Kazakhstan’s education has started to move from knowledge-oriented learning to a skill-development system. President Nursultan Nazarbayev proposed shortening the school week during the March 25 joint session of the Senate and Mazhilis of the sixth convocation. The head of state noted current students are very busy.

“In all developed countries, schools have a five-day school week… In some countries there is even a four-day school week. And, today, this transition is a global trend in developed countries. We also need to implement this practice… There are too many courses, more than necessary. Some courses can be combined or removed from the curricula. This issue needs a deep analysis,” he said.

Minister of Education and Science Yerlan Sagadiyev expressed a willingness to reduce the school week, but stressed it will take three to four years.

The announcement has caused an enormous amount of media coverage and widespread discussion on social media. The majority of moms and dads have supported reducing the school week, but are opposed to the school year lasting until early June.

“All the parents try to take vacation in summer in order to spend time with their children. Now, it turns out that there are only two months left. When I went to school, it was really hard to sit in the classroom in May as the weather is warm and apples start to blossom. I cannot imagine how the children will study in June. They will not be able to receive the information properly,” said one Facebook post.

City resident Zhanara Sarsembayeva is among those who back the changes.

“I generally support the education reform because a six-day week is a burden. Taking into account the tasks at home, a child is unable to attend the additional classes. There are a lot of problems concerning the programme and schedule, but I think eventually everything will be regulated,” she wrote.