ASTANA – The April 20-22 Eurasia Media Forum brought together more than 500 international politicians, pundits and journalists to discuss a myriad of international issues. 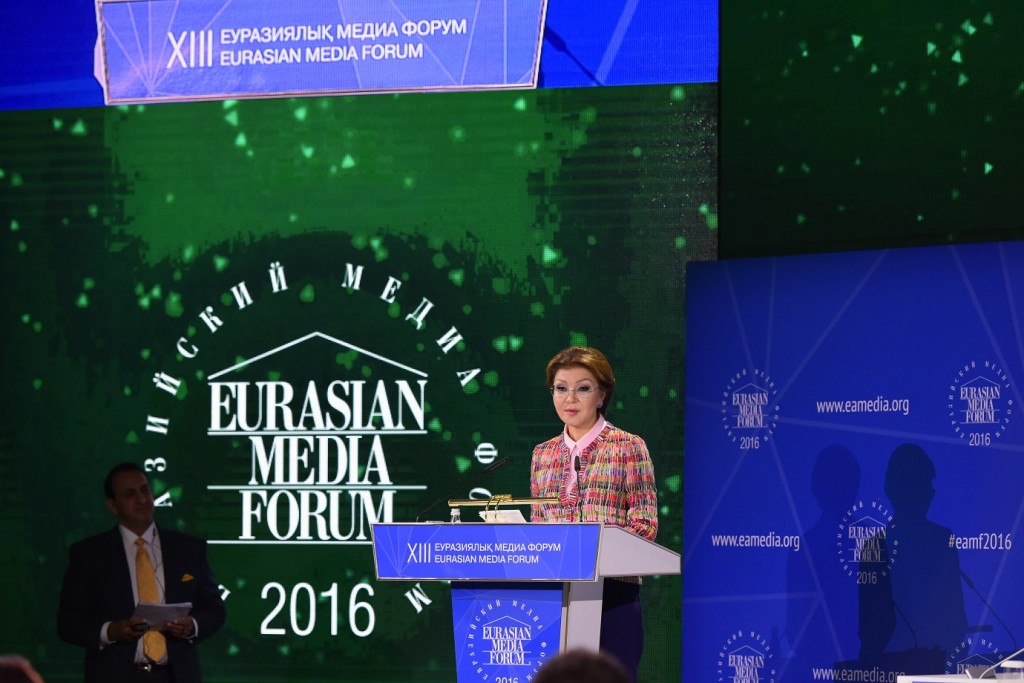 “Globalisation through business, digital technologies development and modern media affects and changes not only the material world, it changes the culture, the traditional values, and it makes adjustments to the spiritual world of people,” said Deputy Prime Minister Dariga Nazarbayeva, who is also chair of the EAMF Organising Committee, during the closing ceremony of the EAMF. “No country is able to survive in isolation, especially when digital communication and the internet encourage people to see a better life and it makes the government look for new revenues and create new jobs. Everything can be digitised, but I believe it is impossible to digitise our conscience, soul, our mind, which are in constant search for answers to internal questions – why it happens, who is to blame and what to do. Such discussion platforms will always be in demand. Thank you very much for this interesting discussion and the opportunity to see the problems from different angles.”

This year, participants from several dozen countries, including 48 speakers, as well as 185 media representatives, of which 82 where foreign, took part in the forum.

The EAMF’s programme on April 20 began with a lecture by Simon Anholt, independent policy advisor from the United Kingdom, who is known for his work on “nation branding” and “place branding.” He talked about Kazakhstan’s image and brand in politics and the processes to enhance the influence of the country. 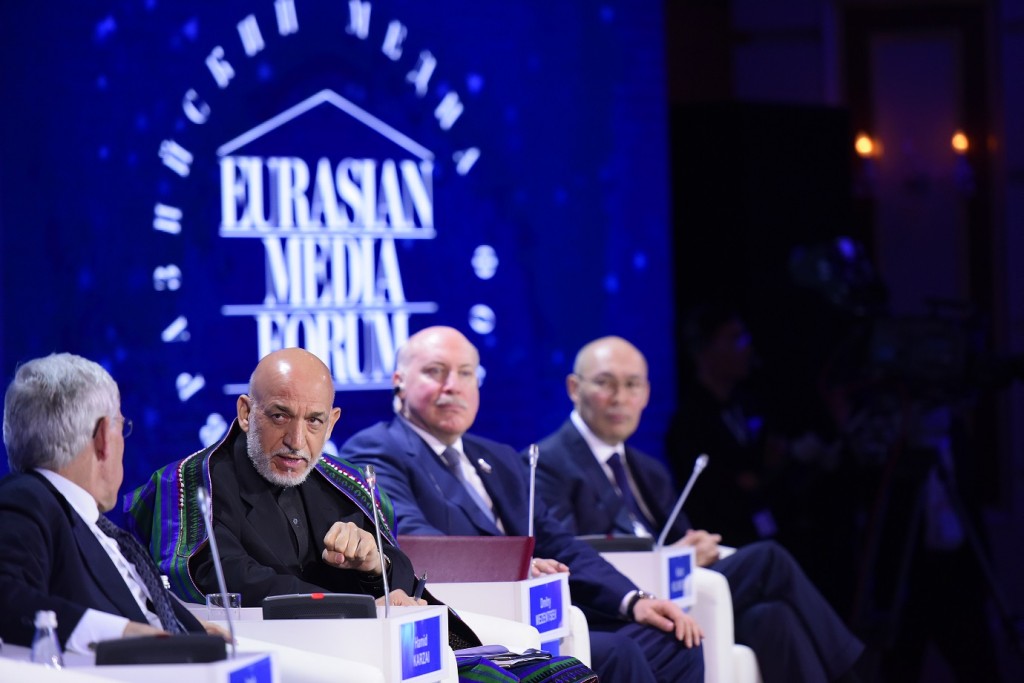 The forum’s official opening ceremony took place April 21, when Nazarbayeva delivered speeches on behalf of Kazakh President Nursultan Nazarbayev and herself. Her speech was followed by the welcoming remarks of former President of Afghanistan Hamid Karzai.

The first of the six sessions began after the opening ceremony and were reported on in another story in this publication.

The second session was devoted to the political situation in the Middle East and gathered prominent speakers such as Hamid Karzai, Ahmed El Sayed El Naggar, Chairman of the Board of Al-Ahram Media Holding from Egypt, former Advisor to the UK Defence Ministry Major General Arthur Denaro, General Manager of the Middle East Centre for Studies and Public Relations in Lebanon Hisham Jaber, and Maxim Suchkov, political analyst and expert of the Russian International Affairs Council. 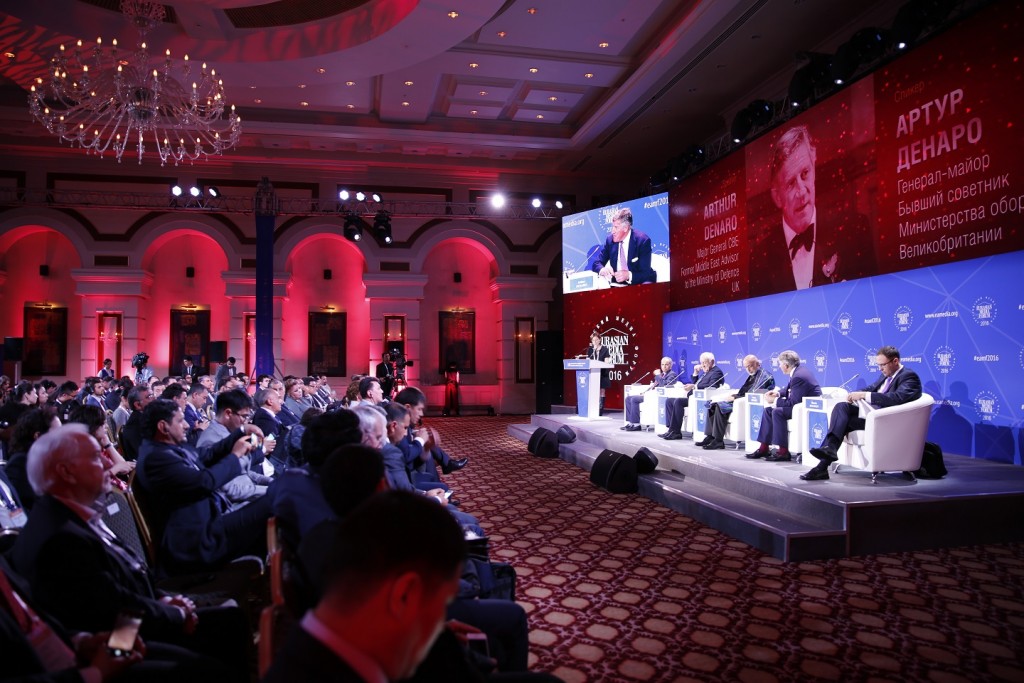 According to Karzai, the only way to achieve peace is to foster trust between the United States, China, Russia and India. In his opinion, radicalism arises only because of social conditions or religions and the growth of extremism is connected to bad politicians and their decisions. (Later in the day, Karzai also gave a lecture at Nazarbayev University named “Afghanistan: New Challenges and Opportunities.”)

Director of the Kazakhstan Institute of Strategic Studies under the President Erlan Karin said religious extremism and terrorism are manifestations of conflict, the main reason for which is unconsolidated society.

“If we imagine a world map, we see that the earthquakes occur along the tectonic faults. Political conflicts also occur along fault lines, and the deeper these faults are, the greater the possibility that they will not stand and be drawn into the conflict. The more society is discredited, the more possibility of the conflicts in it there will be. Examples are Afghanistan, Syria and Libya,” he said.

Almost all experts agreed that terrorism is connected to political struggle, rather than the conflict between religions.

The third session, moderated by Lei Cheng, anchor on China’s CCTV, focused on the new image of oil countries and the effectiveness of branding in the modern world. One of the speakers, Kazakh Deputy Foreign Minister Roman Vassilenko appeared on the panel wearing Kazakh national dress – shapan (long dressing gown) – and welcomed everyone in Kazakh, thus stressing the need to include culture and traditions as part of any nation branding. In his remarks, he talked about once famous character Borat, portrayed by actor Sacha Baron Cohen and his effect on the country’s image. 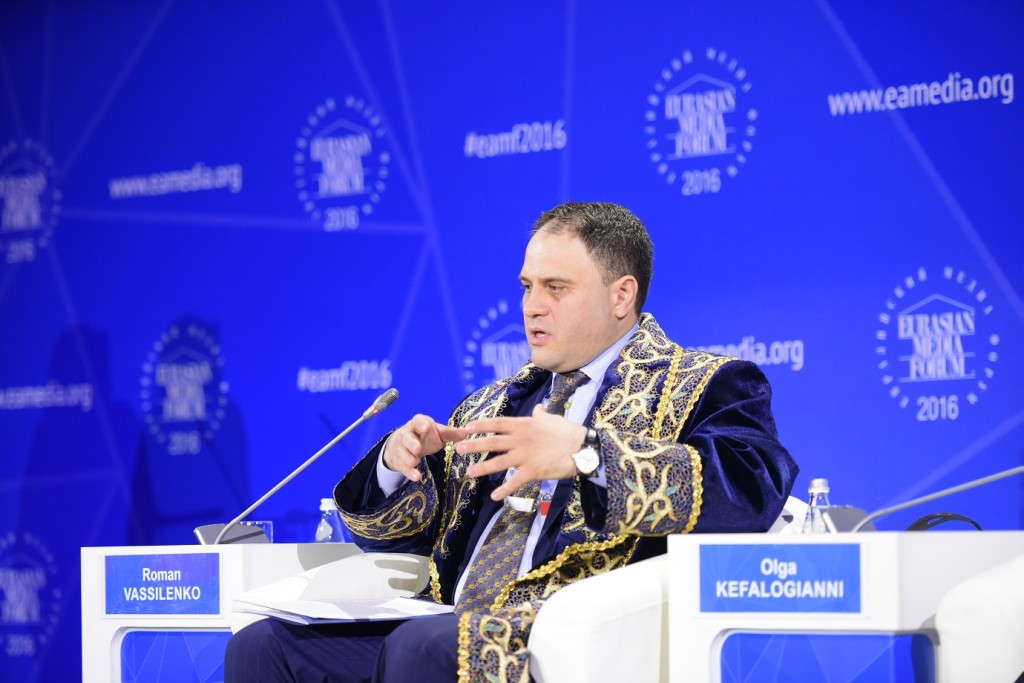 “We tried to benefit from that situation 10 years ago and used the misconception that famous British actor was presenting to promote real Kazakhstan. In a sense, we were trying to make lemonade out the lemons that he gave us,” he said.

Olga Kefalogianni, who is a member of the Hellenic Parliament and was Minister of Tourism of Greece in 2012-2015 talked about the image of Greece and its experience in building a national image and brand. She said Greece’s current economic problems do not affect the long-term image of the country as an attractive tourist destination, yet efforts to maintain that image needs to be continued. Following her remarks, Vassilenko talked about stereotypes and perceptions. He stressed that Kazakhstan is in a very different situation than European countries because it appeared on the map as it is now only 25 years ago.

“We face very different challenges, but they are similar in a way and the approaches should be relatively similar as well and different at the same time. We have to run, as a young country, twice as fast as Greece. And Greece can certainly keep calm and just walk along hoping that all these temporary problems will disappear,” he said adding that, for example, Poland, which he has recently visited, has to face misperceptions due to tangled European history and the history of interaction between European people for millennia.

According to him, Kazakhstan in this case has to present itself as a new independent country. “That’s why we pay a lot of attention to the way we are perceived abroad.”

The EXPO was also discussed at the panel. Deputy Chairman of the Board of Astana EXPO 2017 Yerbol Shormanov said the preparation for the upcoming expo are in what is called “active phase.”

“We do not have even slightest reason to worry about holding the expo. We are sure we will hold the event on the highest level. To date, 81 countries have officially confirmed their participation as have 14 international organisations. We are closely working with all of them,” he said. 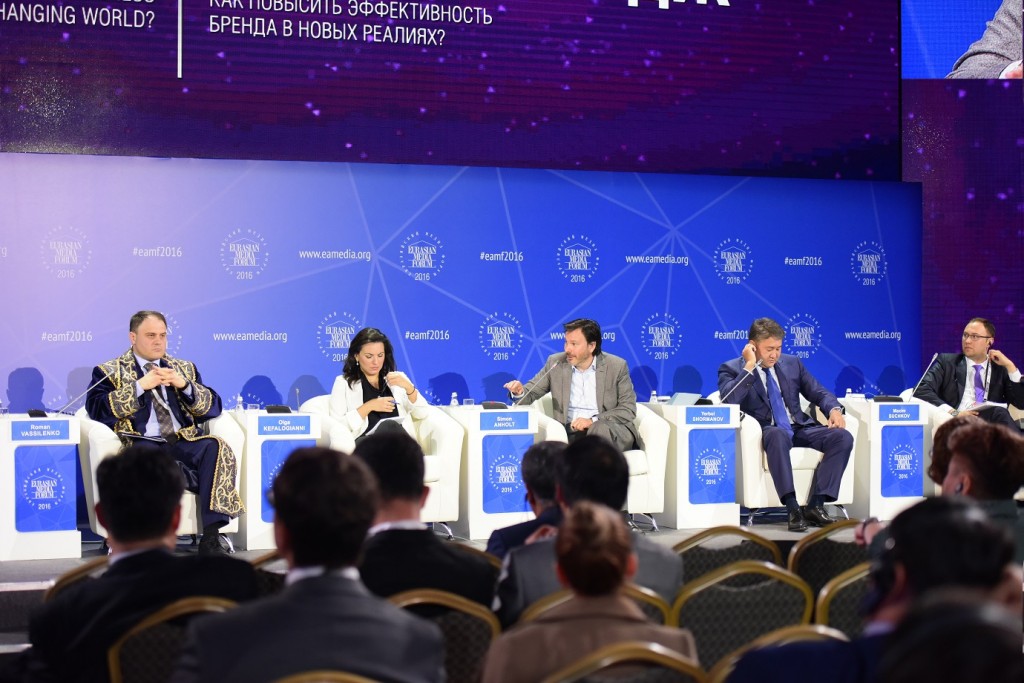 Shormanov added that Kazakhstan diversifies its economy and as a country rich for resources, it’s moving toward the green economy.

“I think that Kazakhstan has a very interesting potential for having a big global discussion about something that is not sports,” Anholt said of the expo, adding that there are not “real venues for the world to get together and discuss things other than sports.”

“I don’t think the expo really achieved that yet, but I think that Kazakhstan could be the first one that actually does that and prove the full potential of the expo,” he said.

In his opinion, the biggest problem for Kazakhstan could be being “insufficiently ambitious” and that the expo should not only be considered an opportunity to raise the profile of Kazakhstan, but to engage the world in a productive conversation about something that really matters everywhere and to take the lead in that conversation. “If Kazakhstan’s strategy is to help encourage the world towards sustainable energy, then it is a fantastic winning strategy,” he added.

Talking about sporting events, Vassilenko mentioned the upcoming Winter Universiade that will be held next year in Almaty. “The focus is to organise it in a very efficient way so the expenditures are minimised but the effect is maximised.”

“The values that we would like to be seen as part of the national brand of Kazakhstan are, first of all, people, who are the most valuable value that we should promote,” he said.

He stressed that Kazakhstan understands well that the perception abroad can only depend on the actual performance of the country, economically, socially and its contribution to the world.

The fourth session’s participants discussed information wars in the 21st century and the responsibility of the media in promoting terrorism and extremism.

Secretary of the Security Council of Kazakhstan Nurlan Yermekbayev said that sometimes journalists are playing for the terrorists’ team without even knowing it. 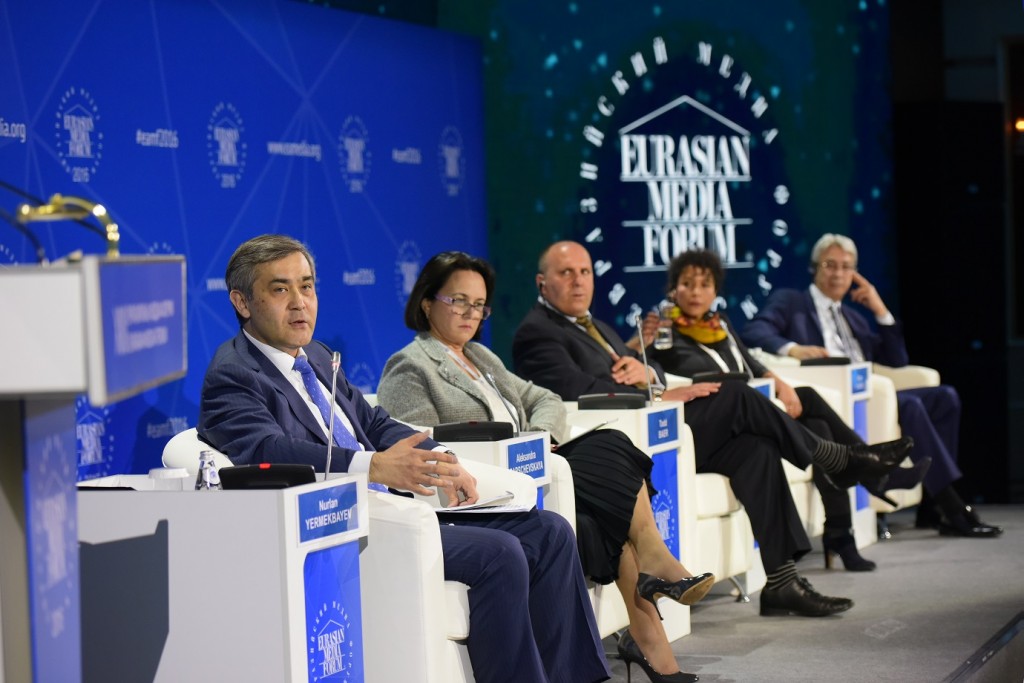 “One of the objectives of terrorists is a manifestation, a statement and an intimidation. And journalists often tell everything in detail, reveal the methods of law enforcement,” said Yermekbaev. According to him, when journalists talk about the terrorists – who they are, where they come from, how they lived, – it pushes people to do the same terrorist actions. Yermekbaev said that if journalists engaged in discrediting extremist groups, there would be much fewer followers of the terrorists.

The discussion also touched on recent terrorist attacks in France and Belgium, as well as the role of social media in today’s world and whether it can be a real media. The session was moderated by Mikhail Gusman, first deputy general director of Russia’s TASS. Along with Yermekbayev, speakers such as Todd Baer, executive producer at Bloomberg Media, Pearl, Vice-President of Skolkovo Foundation Aleksandra Barshevskaya and Sinan Kürün, head of the Information Department and Directorate General of Press and Information of Turkey shared their opinions on the issue.

The day ended with a lecture by Pankaj Paul, advisor and editor for [email protected] from the United States, whose topic was Change Is the New Normal – The Evolving Face of News, while head of the Astana International Financial Centre Kairat Kelimbetov gave a lecture at Nazarbayev University.

European Union, despite difficulties, is the best integration model there is

The forum’s last day opened with session number five, The Future of the European Union. Erosion of Europe’s Competitiveness. 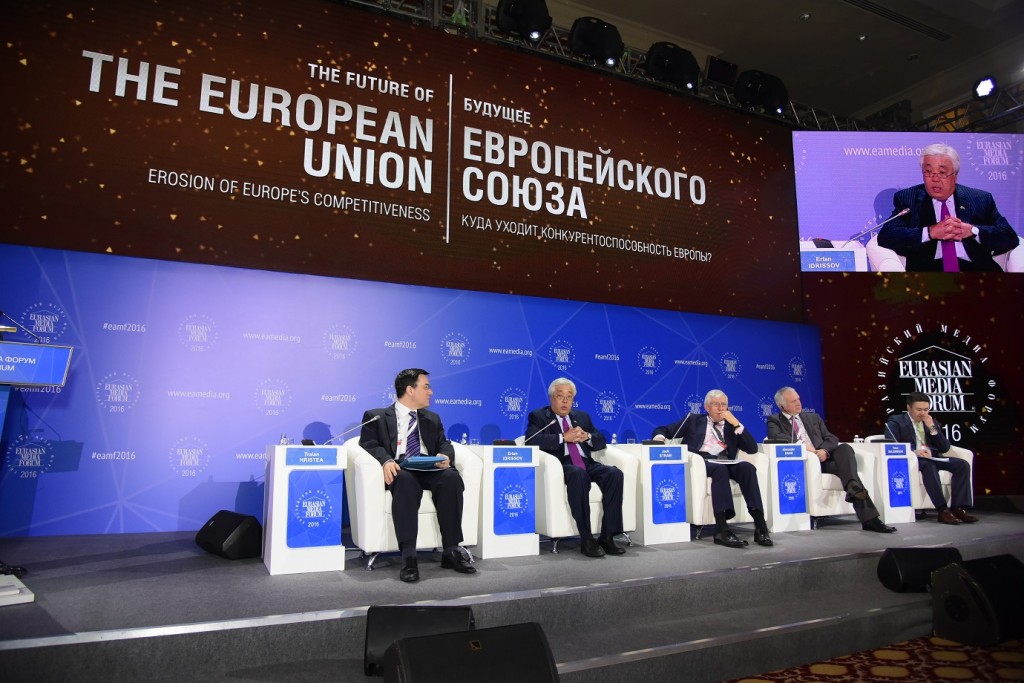 Idrissov congratulated Jack Straw on the 90th birthday of Her Majesty and reminded that April 22 is the birth date of Vladimir Lenin.

“Europe is a source not only of advanced technologies and investments, but it is also the source of many values, many institutional and political reforms. From our perspective, from Kazakhstan, we want to see Europe stronger and stronger. We believe in the potential of Europe. It has the capacity to overcome these serious challenges,” Idrissov said in his comment.

Europe is one of the biggest political and economic partners of Kazakhstan, said Idrissov, mentioning the new agreement on enhanced partnership and cooperation between Kazakhstan and the European Union, signed in December last year.

Hristea stressed the readiness of the European Union to cooperate with countries of other regions and said Europe has faced challenges many times before and will do the same this time and urged everyone to be more optimistic.

Suleimenov added that the Eurasian Economic Union is trying to copy and adapt EU’s experience and avoid mistakes.

Future of cinematography and the role of the state in it

The last session was called “Dream Factory” and its role as an instrument of influence on society, as well as business and politics in the cinema industry. 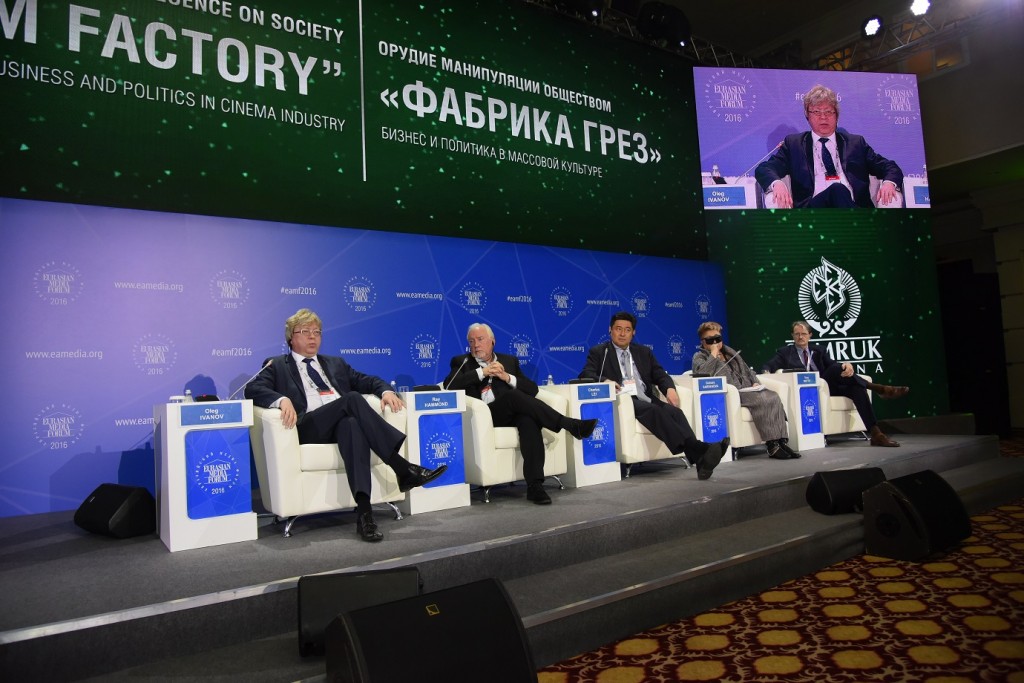 Futurist Ray Hammond, First Deputy Chairman of the Russian Union of Cinematographers Oleg Ivanov, CEO of Thunder Communications International from China Charles Lei and Kazakh film producer Gulnara Sarsenova, who is also general director of Eurasia Film Production, expressed their points of view on the future of cinematography and the role of the state in the filmmaking industry.

There were two lectures on the last day. One was Financial Journalism Trends with Daniil Babich, TV presenter and deputy editor-in-chief of the Russian RBC TV Channel. The second one was on digital journalism with Alexey Pivovarov, TV presenter and head of Aviator Production of Russia.

The next Eurasia Media Forum will be held in June 2017 on the sidelines of EXPO 2017.