By Anuar Abdrakhmanov in Sports on 29 March 2016 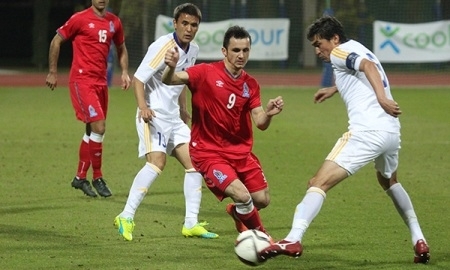 The Kazakhstan Football Federation entrusted the leadership of the country’s main team to two home-grown professionals – Talgat Baisufinov and Nurken Mazbaev, a well-known former player and one of the best strikers in the history of the Kazakh league. Team Azerbaijan is now run by a well-known former Croatian player, World Cup 1998 bronze medal holder Robert Prosinecki.

The game began actively and Kazakhstan took the lead in the eighth minute. Serikzhan Muzhikov earned a corner kick and in the subsequent rally, Baizhanov headed the ball into the net behind Kamran Agayev.

The Azeri players kept losing the ball in the middle and very rarely threatened their rival’s goal. Closer to the middle of the first half, they managed to improve their play and give Kazakh goalkeeper Stanislav Pokatilov a few nervous moments. Azeri players Araz Abdullayev and Zaur Ramazanov were especially zealous in their attacks. Later, the Kazakh team again dominated on the pitch but could not covert into scoring goals.

The second half saw a fairly high pace, with dangerous moments emerging constantly in front of both teams’ goals. In a memorable episode, Baizhanov had a particularly-threatening strike, but Agayev salvaged his team. Meanwhile, Azerbaijan’s counter-attacks were successfully repelled by Kazakh defenders led by Yuri Logvinenko and Samat Smakov. blocking few strikes from Namik Alaskarov were also blocked.

Baizhanov, the first half’s hero, was replaced by Islambek Kuat during the mid-match break. The latter won a good number of physical confrontations, helping veteran defender Smakov. Team Azerbaijan’s Kazakh-born striker Dmitry Nazarov, who plays for the Karlsuher SC Second Bundesliga side, tried to find his teammates at the opponent’s half through long passes and volleys. In one moment, Ruslan Gurbanov failed to hit the ball following an excellent pass from Asif Mammadov.

Alex Shchetkin failed to score later from what looked like a brilliant position to hit the net. The Kazakhs could again have doubled their advantage, but Gafurzhan Suyumbaev’s strike lacked precision and the crossbar saved the Azeris.

The final whistle fixed the victory for Kazakhstan’s national team. Baizhanov spoke after the game with The Astana Times

“Everything went well. We scored on an early goal, as planned. The match was a difficult one. But most importantly, we managed to play well and won.

“The team performed well and complied with our tactical setup. I am glad the players gave their all at the pitch today and tried hard to create danger in front of the opponents’ goal,” the head coach Baisufinov commented on the outcome.

Kazakhstan will visit Team Georgia March 29 in another friendly match. The game will be played at Boris Paichadze Dynamo Arena in Tbilisi, which in August hosted the Union of European Football Associations (UEFA) Super Cup contested by two Spanish clubs – FC Barcelona and Sevilla FC.

Team Kazakhstan will entertain a few more friendly matches before starting qualifications for the World Cup 2018 Sept. 4 at a home pitch against Poland.