By Malika Orazgaliyeva in International on 17 March 2016

Kazakhstan’s Secretary of State Gulshara Abdykalikova told the March 14-15 60th session of the United Nations Commission on the Status of Women that her country’s women-oriented and gender-sensitive policies enable women to succeed at the national level. 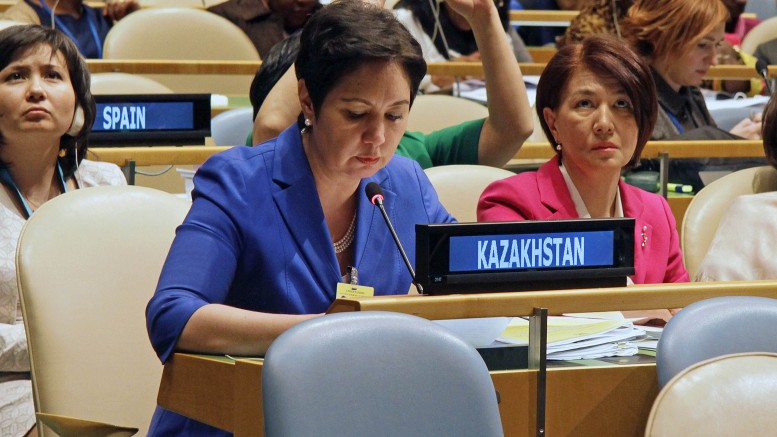 According to the Kazakh Foreign Ministry’s press release, Abdykalikova said during the session, dedicated to “Women’s empowerment and its link to sustainable development,” that President of Kazakhstan Nursultan Nazarbayev pays great attention to the political leadership of women, their contribution to the economic growth and prevention of gender violence.

Kazakhstan, as a member of the UN, advocates for gender equality and empowerment of women throughout almost all of the issues and processes on the agenda of the organisation. Kazakhstan has been a member of the Commission on the Status of Women several times and is a member until 2018.

Abdykalikova addressed the commission in her capacity as Chairperson of the National Commission for Women, Family and Demographic Policy under the President, focusing on the structural causes of gender inequality and discrimination, putting forward gender-responsive state policies and programmes. In light of the newly adopted 2030 development agenda, Abdykalikova shared the goals of the country’s gender-sensitive policies.

The Kazakh delegation also met with UN Secretary General Ban Ki-moon and Under-Secretary-Generals, Executive Director of the UN Women Phumzile Mlambo-Ngcuka and Administrator of the UN Development Programme Helen Clark. The delegation also met with Executive Secretary of Inter-American Commission on the Status of Women Ambassador Carmen Moreno, as well as Ban Soon-taek, spouse of Ban Ki-moon, who is an advocate for the protection of women’s rights and their empowerment. The sides expressed a desire to expand cooperation.

On 14 March, Abdykalikova and Permanent Representative of Kazakhstan to UN Ambassador Kairat Abdrakhmanov hosted a Ministerial Working Luncheon with the theme “Gender and Family Demographic Policy of Kazakhstan: Growth, Reforms and Sustainable Development,” with the participation of ministers and ambassadors from Africa, Europe, Asia and Latin America.

During the event, around 40 high-ranked representatives learnt about the country’s gender-responsive policies, including those related to capacity building for women in rural areas in the fields of political participation and economic, social empowerment and education. Participants expressed their intention to strengthen bilateral and multilateral cooperation in the area of women’s empowerment and protection of the rights of women and girls, reinforcing mutual commitments for their advancement worldwide.

At the meeting with Deputy Secretary of State for Civil Security, Democracy and Human Rights Sarah Sewall, Abdykalikova discussed bilateral and multilateral cooperation.

Abdykalikova also spoke at the Woodrow Wilson International Research Centre, a leading U.S. research institution. She emphasised the strengthening of national unity, inter-ethnic and inter-confessional consent in Kazakhstan and talked about the training of Kazakh specialists abroad in the framework of the Bolashak programme. During the event, which was attended by over 100 representatives of U.S. academic and public institutions, as well as students of the University of Washington, Abdykalikova answered questions concerning the efforts of the Kazakh government to expand the economic and political empowerment of women.

Abdykalikova met with President of the Global Summit of Women Irene Natividad and discussed strengthening the role of women in the socio-economic development of countries, raising their status and enhancing their participation in decision-making.